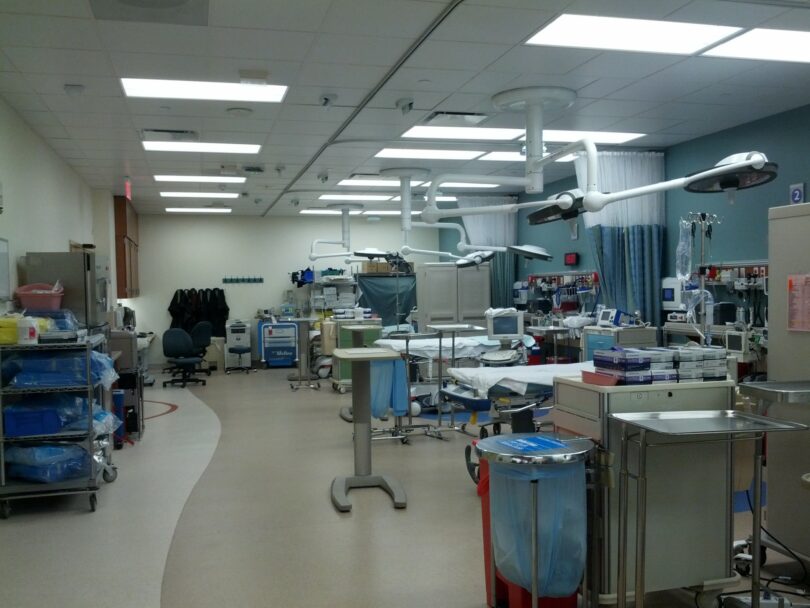 Inside a ward at the notorious Mofumahadi Manapo Mopeli Regional Hospital in QwaQwa in the Free State. (Photo: Bloemfontein Courant)

The Mofumahadi Manapo Mopeli Regional Hospital in QwaQwa has got its naysayers out in full force following reports of old equipment and the low morale of health workers. As the walls fall in, poverty-stricken residents are too afraid to seek medical attention from the hospital.

Community members, who were previously hospitalised, shared their ordeals with Health-e News. The majority have regretted ever having set foot there.

Katleho Mokoena, 29, was hospitalised for four months. He said he struggled to eat by himself and nurses often mocked him.

“They left me to starve and they wouldn’t give me food even when they could see I was unable to eat by myself. I’d only eat when my mother came,” he said.

Another resident, Nonyane Lephike from Phuthaditjhaba, said her sister was admitted and she was shocked to see the conditions.

“I went to visit my sister and witnessed careless nurses and broken furniture. The patients don’t even have tables for their plates of food. I’m not sure how this hospital can have regional status,” she said.

“I pity those who are sick, like those who have had strokes. They aren’t being fed. Family members are the ones feeding the patients,” said Mswazi.

She added that patients were also being robbed of goods such as phones. “We don’t allow our loved ones to have any valuables with them like phones. Nurses help themselves. And if a patient passes away, or is nearing death, family members aren’t informed in time,” she said.

“Firstly, I think the hospital needs evaluation of health risks by external independent auditors. Secondly, Manapo requires regular staff training. Thirdly, those employees who don’t perform, need to be dealt with harshly. And finally, those in control must monitor the facility regularly,” said Radebe.

Another Activist, Paul Tsosane called for an investigation focusing on the conduct of nurses.

“We call on the government to investigate allegations of negligence at the facility and to try to bring about change there,” he said.

The Manapo Hospital isn’t the only facility not trusted by patients; Pelonomi and Phtholoha are just as notorious.    Manapo serves over 5,000 people per month, making it the biggest in the Thabo Mofutsanyana District. In 2020,  former Health Minister Zweli Mkhize made the facility a National Health Insurance (NHI) Centre.

According to the Free State Department of Health Spokesperson Mondli Mvambi, they have not received any formal complaints from patients.

“It is not right to come to the hospital and not receive the help that you expect as a patient. We took an oath to treat patients with care and respect,” said Tsiu.

Meanwhile, a nurse at the facility, Bongi Nkuna said: “We are working under hectic conditions with colleagues constantly having beef against each other. Some colleagues ignore their duties and they know unions will fight for them.”

Both Denosa and NEHAWU have not responded to questions sent to them.

According to the Office of the Health Ombud (OHO), they are present to protect and promote the health and safety of users of health services. It considers, investigates and disposes of complaints in the national health system relating to non-compliance with prescribed norms and standards.

The OHO strives to ‘contribute towards the development of public service culture characterised by fairness, dedication, commitment, openness, accountability and the promotion of the right to good public administration’.

The public is urged to submit their complaints if they were inappropriately treated or provided with poor quality health care services. “Whistleblowers are guaranteed anonymity,” the OHO further stated. – Health-e News