Home » Taking the fight against HIV to the streets 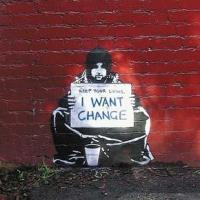 A beggar on the streets of Johannesburg has something to offer to everyone. He is offering advice that people should beware of HIV.

On the busy intersection of Bompas and Melville roads in Illovo, north of Johannesburg, you will meet Bheki Mthembu, a street beggar from Zola, Soweto. He stands here on a daily basis wearing a huge hat made of card-board on which he has written messages about HIV and AIDS.

‘Please be aware HIV/AIDS kills. Please use a condom’, Mthembu reads out one message from his hat.

Mthembu’s self-made hat symbolises a coffin. It has two ribbons hanging on the sides. He is proud of the message he is sending and says by now everyone has either been infected or affected by the disease. He is among the millions of South Africans who have a personal story to tell about HIV/AIDS.

‘Some people still don’t care because they have not yet lost loved ones from this disease. I have lost my eldest nephew, though I cannot recall when. Then, the year before last, we buried my other nephew. Shortly after that, it was his mother’, says Mthembu.

When asked if he thinks the South African community understands the seriousness of HIV/AIDS, Mthembu replies:

‘I think more emphasis should be put in places such as taverns, where alcohol is sold. These places hardly promote safe sex there. They should have signs that would encourage people to use condoms or go and get tested or even go for regular check-ups in the clinic. There are no such signs or information that guides people. I believe there should be that information available’.

Hundreds of motorists and pedestrians pass through this busy intersection every second. Some ignore Mthembu, while others applaud his work. Malebo, one of the drivers who pass through the intersection, says Mthembu is doing a great job by spreading such a powerful message in a subtle manner.

‘It is scary – point number one. And we should protect ourselves against HIV/AIDS. I am scared of this disease. I have lost too many people I was close to. I don’t even know my status. I am too scared. But I want to say use condoms every time we have sex’.

‘Because the message is being passed by a beggar on the street, should people take it seriously’? , we ask her?

‘Of course, I do. I don’t see him as a beggar. It shows that this guy really cares and he is aware and he is trying to make everyone else aware of the disease. The message is straight-forward, we all know about HIV. The message is coming from somebody we least expect’¦ because he is beggar. For me, he is like my hero. He really shows he cares. His hat tells you straight’¦ that if you do not protect yourself, you will die. There are no two ways about it. As you can see that is a coffin. I am very scared of what I see in front of my eyes now’, says Malebo.

‘I take this message serious. It encourages you to use a condom. It is free awareness and we should accept it in a positive way’.

Mthembu says we should all know our status.

‘Take your own initiative and check’¦ please’¦ before you get infected. You know your body better than anyone else. Government needs to work harder to spread the message’, says Mthembu.

He adds that people are often too proud to disclose their status or even receive help. He says that is what will in the end kill you.