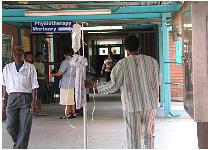 Academic hospitals should be centrally controlled, and 1000 doctors will start training in Cuba later this year, the ANC commission on health policy resolved in Midrand on Friday.

“These are central assets which [offer a] service across provinces… these are hospitals attached to universities,” said Health Minister Aaron Motsoaledi, who is a member of the health and education commission.

He said it made sense to move control of these hospitals from the provinces to the national health department, as university training was a national competency.

This would also resolve the problem of referring patients across provincial borders.

Motsoaledi said 1000 students would leave for Cuba later this year to study medicine.

It cost R1.7 million to train a doctor over seven years in South Africa. The same training would cost R700,000 in Cuba.

He dismissed concerns that Cuba’s medical training was “inferior” to South Africa’s.

Cubans had a longer life expectancy and had managed to eliminate many diseases on the island, including malaria and measles. The prevalence of tuberculosis was very low and that country had a 0.1 percent rate of HIV/Aids.

“Cuba has eradicated most of the diseases that are bedevilling us,” he said.

The ANC commission was also recommending that a dedicated National Health Insurance fund be established urgently; that the state be a major shareholder in a state-owned pharmacy; and, that the primary training of nurses should take place in hospitals, not universities.

It wanted a healthcare commission set up to promote initiatives to ensure people needed less healthcare. It should also look at issues such as reducing smoking, getting South Africans to eat better and exercise, and improving road safety.

Motsoaledi was briefing the media on the final day of the ANC’s four-day policy conference.

Recommendations from the policy conference will be finalised at the 53rd ANC national conference in Mangaung, Free State, in December.

These policies will form the basis for the ANC government’s policies, new laws or amended laws.

Foreign doctor Rob Melvin believes he became a better doctor in rural KZN. He tells his story to Luke Giddy.

A new concept is gaining momentum in South Africa. After three years of debate and discussion a Charter for Sexual Rights has been adopted enshrining the rights of women to control their sexual and reproductive health. The Charter advocates mutual respect between men and women and it is hoped that this will prevent the spread of HIV/AIDS.

A summary of the labyrinthian world of social welfare services and the options that exist for abandoned children or those offered up for adoption.