Home » Big boost for the snip 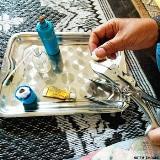 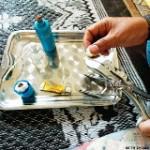 This will be in addition to the R360-million the US President’s Emergency Plan for AIDS Relief (Pepfar) has already committed to South Africa this year, said Goosby.

“We have shifted our focus to high-impact HIV prevention interventions, and top of the list is medical male circumcision,” Goosby announced, after touring the Woodstock Community Centre.

The attraction of MMC for donors is that one medical procedure to remove a man’s foreskin can reduce a man’s risk of getting HIV by 60 percent, explained Dr Thobile Mbengashe, Chief Director of HIV/AIDS in the health department.

“If we could develop an AIDS vaccine that was 60% successful, we would be very happy,” said Mbengashe.

More than a million new HIV infections could be prevented if 80 percent of men aged 15 to 49 were circumcised, according to the health department. This would save over R55-billion in treatment costs.

“South Africa’s AIDS programme is at a tipping point where it is about to register a drop in the number of new infections (in comparison to people being put on ARV treatment),” said Goosby. “Once this happens, there is usually a steep drop and it is important not to take your foot off the accelerator.”

The SA Clothing and Textile Workers Union (Sactwu)’s Worker Health Program is a key partner helping the government to provide MMC countrywide, and so far has overseen 80 000 circumcisions since July 2011.

The programme’s executive director, Nikki Soboil, said the success of Sactwu’s programme was “going to the people rather than expecting them to come to us”.

Staff members were able to circumcise 200 to 250 people a day in places such as community halls as long as there was access to water and electricity.

“We have managed to reduce the costs of male medical circumcision to $80 (R800) per procedure,” said Soboil.

“The creativity of the roving teams is incredible. Reaching people where they are is the answer,” said Dr Nono Simelela, special adviser to Deputy President Kgalema Motlanthe.

The TB/HIV Care Association is also helping to roll out MMC in prisons as well as in seven health districts.

“They thought we were also doing initiation but we explained that we are just doing the procedure,” said TB/HIV Care’s Zolani Barnes.

“We are proposing that we do the procedure and after the healing process, the men go for initiation. Some have agreed but there is some resistance.”