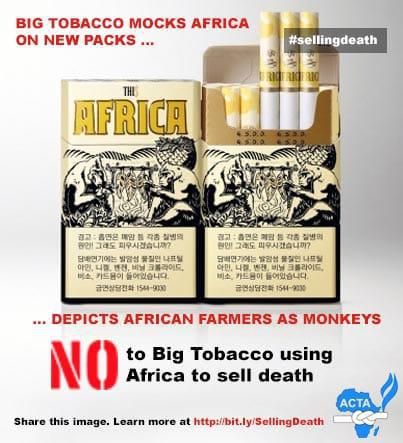 African tobacco control activists have launched a campaign calling for a South Korean company to pull its “This Africa” cigarette brand.

A South Korean tobacco company is pulling an advertising campaign depicting African tobacco farmers as monkeys after complaints of racism. However, similar imaging on the cigarette packs will remain. 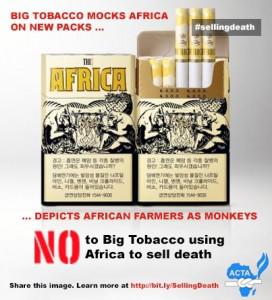 In an earlier statement calling for a withdrawal of the campaign, the African Tobacco Control Alliance said that they were “deeply offended by KT&G’s shameless and insulting use of this mocking imagery.”

It added: “Mocking Africa to sell a product that causes death and disease is unacceptable, and we will not stand for the exploitation of Africa by tobacco companies.”

According to recent news reports, KT&G promised to pull the ads this month, but explained that the images were used to illustrate that the product contains African tobacco roasted and dried in a traditional fashion.

“We absolutely had no intention to offend anyone and only chose monkeys because they are delightful animals that remind people of Africa,” a KT&G spokeswoman told French news service, Agence France-Presse.

Although the company promised to remove the advertising campaign, it said that the images on the cigarette packets will remain as the company does not consider them to be offensive. – Health-e News Service