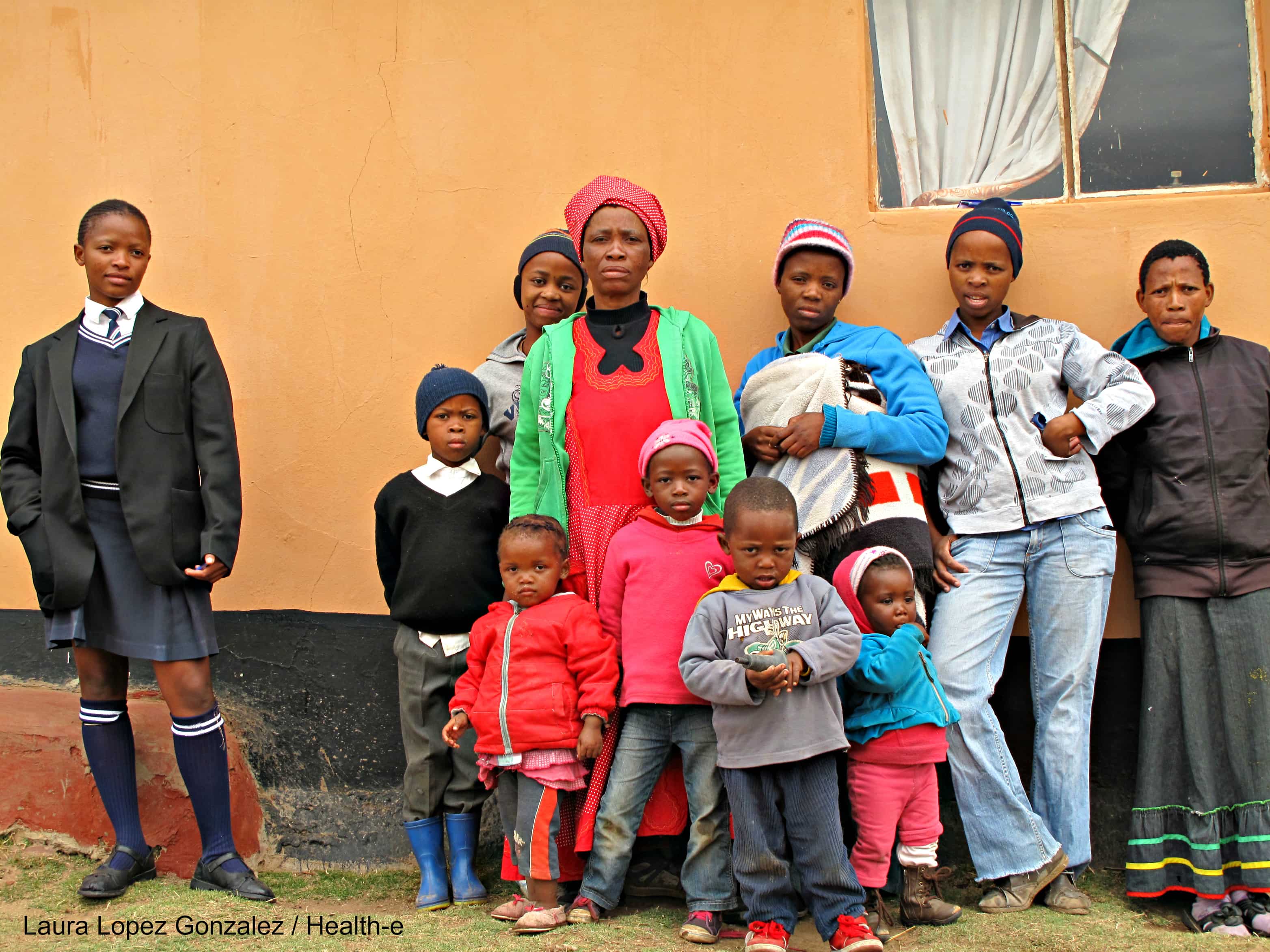 South Africa’s first class action silicosis suit could win compensation for hundreds of thousands of miners and widows – and prepare the way for a class action suit against the mines for tuberculosis. 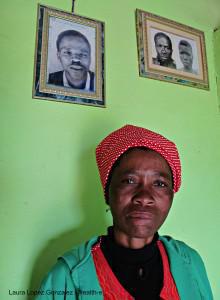 THE WIDOW: Nozuzile Mankayi in her home outside Mthatha, Eastern Cape. A picture of her late husband, Thembekile, hangs just above her to the left.

In the late 1970s, Thembekile Mankanyi and Alloys Mncedi Msuthu left their homes in the Eastern Cape for the mines. They watched from the windows of buses and trains as the landscaped changed from the rocky cattle country and lush rolling hills of their youth to the Free State’s grasslands. It was a train ride that would build houses, educate children and weave the lives of these two men together.

In March 2011, the Constitutional Court ruled Mankanyi could claim more than R2.6 million from former employer AngloGold Ashanti after he developed a lung disease called silicosis.

Represented by attorneys Richard Spoor and Charles Abrahams, Mankanyi died about a week before the Constitutional Court ruling, but the judgment allowed his family to return to court and pursue his claim in the High Court. It also set a precedent for miners to sue their former employers for compensation in addition to pursuing paltry statutory compensation established by the 1973 Occupational Diseases in Mines and Works Act 1973 (ODIMWA).

The maximum compensation for severe silicosis, which is a death sentence, is about R100 000, according to Georgina Jephson, an attorney working for Spoor.

However, Mankayi’s widow, Nozuzile, has not seen a cent. Currently, the law makes it difficult for miners’ dependents like Nozuzile to pursue claims for damages suffered as a result of the loss of their breadwinners. These claims are often much smaller than those that would have been awarded to miners.

[quote float=”right”]By 2007, the Department of Health estimated that the country’s gold mining industry had the world’s highest rate of new TB cases.

If the courts accept this class action suit, it will be a hard fight for Abrahams to prove that the TB killing off miners originated on the mine. Unlike silicosis that is only contracted through occupational exposure – it is hard to prove TB was contracted on the mines. Abrahams is working with medical experts to argue that silica dust exposure puts men like Msuthu and thousands of others at risk of TB. According to World Bank figures, silicosis increases a person’s risk of developing active TB six-fold.

Silicosis and tuberculosis – a dangerous duo

Previously known as “miner’s phthisis”, silicosis is a lung disease arising from exposure to silica dust during mining that can appear decades after people are exposed to the dust.

About a quarter of long-serving miners have silicosis, according to statistics cited by the LRC.

The high burden of silicosis among South African miners has also helped to fuel a deadly epidemic of tuberculosis (TB) among them that has been raging for decades.

New cases of TB in South Africa began to soar in the 1990s, largely due to the rise in people with compromised immune systems due to HIV. Miners were not immune to the country’s growing HIV epidemic but the silicosis that had taken hold of the lungs of many acted as a double blow – further weakening their immune systems and leaving them vulnerable to TB, according to Rodney Ehrlich from the University of Cape Town’s Centre for Occupational and Environmental Health Research.

The mines’ crowded hostels became a TB breeding ground and by 1999 new TB cases among miners were three times that of the general population, according to the Chamber of Mines.

By 2007, the Department of Health estimated that the country’s gold mining industry had the world’s highest rate of new TB cases.

What it takes to make the case 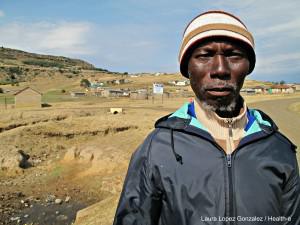 The MINER: Alloys Mncedi Msuthu was a miner for more than 30 years. He was diagnosed with silicosis in 2009, and has had both TB and MDR-TB.

The majority of Msuthu’s 32 years as a miner were spent on the Free State’s President Steyn mine. He was retrenched and sent home to his rural community outside Mount Fletcher, Eastern Cape in 2009 when he developed silicosis. He had already suffered one bout of TB, he says.

His community was among one of the first to be approached by Spoor’s Ziyanda Manjati and her team of paralegals who are canvassing Eastern Cape former miners to collect miners’ information and documents.

To do this, the team works through chiefs and headmen to access communities where they use everyone from teachers and the local nurse to spread the word about the case and gather miners’ information and documents.

But many local leaders have been wary after years of con artists who made quick profits off miners’ by charging up to R100 to supposedly register them to collect Unemployment Insurance (UIF) or statutory compensation under ODIMWA.

Focusing on gold miners with more at least ten years experience on the mines, the team also arranges for some miners to have the chest X-rays needed to help prove lung damage.

When Manjati arrived to fetch Msuthu for a medical examination, he was so ill with multidrug-resistant (MDR-TB) that he had to be carried to the car for the three-hour drive to Mthatha. Msuthu has now been on MDR-TB treatment for more than a year and travels one hour each way by bus from his rural community Ramafole to collect treatment monthly.

Msuthu lived in a single-sex mine hostel until 1998 and had to work for two years before he was able to take any leave. Poor hostel living conditions are one of the points Abrahams plans to make in his case.

“In a lot of mining hostels, there was no separation between the room where clothes covered in silica dust were kept and where miners slept so there was constant exposure day and night to the dust,” he tells Health-e.

When Msuthu arrived in the mines, there was no protective gear to prevent miners from inhaling the dust.

“Later, goggles were given but we wouldn’t normally use them because they would fog up with all the heat underground and we couldn’t see,” he says. “We had to take them off and continue working.” 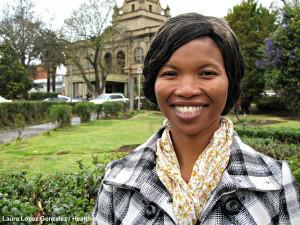 THE MANPOWER: Ziyanda Manjati & a team of four paralegals are scouring the Eastern Cape for miners affected by silicosis and their widows

Details about the availability of safety gear are crucial to the case as are death certificates stating that miners died of either TB or silicosis. Unfortunately, too often certificates simply say that men died of “natural causes.”

Death certificates listing “natural causes” as the cause of death are also barriers to accessing statutory compensation.

But getting families to consent to the autopsies needed to ensure accurate death certificates is difficult, says Sayi Nindi, an LRC attorney at the organisation’s constitutional litigation unit.

“Culturally, it’s frowned upon to open up a dead person’s body so it hardly ever happens,” Nindi tells Health-e.

In the Mankayi’s home outside Mthatha in the Eastern Cape, few pictures hang on the jade green wall – one is Nozuzile’s parents’ wedding picture, the other an enlarged grainy ID photo of her husband. She still lives with his mother, Nowinile.

When the man she had loved from the age of 18 year old died, Nozuzile took the decision to have a post momentum conducted on his body in hopes of receiving state-provided compensation. She admits that in the years since – and with nothing to show for it – she has questioned the move. In 2011, an estimated 280,000 miners would have qualified for compensation under ODIMWA but researchers estimated as little as just two percent were receiving the benefits they were entitled to.

“The neighbours all ask what happened to the money we were supposed to get,” Nozuzile says. “They think I ate it instead of improving the house.”

A glimmer of hope

Like the Msuthus, the Mankayi family buried almost a quarter of their children. The Eastern Cape’s Alfred Nzo and OR Tambo districts have some of the country’s highest death rates among children under the age of five years old from both of the common childhood killers, diarrhoea and pneumonia.

Among those that survived, only Ncedeka has completed matric. Given the number of journalists and lawyers that have entered the family’s life in recent years, it is maybe no wonder that Ncedeka has dreams of being a journalist while her younger brother wants to be a lawyer.

If class action is successsful, Nozuzile says she will send Ncedeka to university but the matriarch fears she will die before the family sees any money.

A former environmental campaigner,  Manjati says she lives out of a suitcase. If there is one thing she hates, it is failure and she knows she is in a race against time to register miners and their families for the case.

“People are dying to get something and we are all just hoping that justice can happen or else they will think the same thing has happened again,” she says alluding to the Eastern Cape’s history of conartists. “They are hoping this case moves forward while they are still alive so justice can be done and they can die happy.” – Health-e News Service.

An edited version of this story first appeared in the 27 March edition of The Star newspaper.

Read how southern African countries are looking to combat TB in the mines.