South African sex workers may have one of the world’s highest HIV prevalence rates and addressing this is just one of six ways South African National AIDS Council (SANAC) CEO Dr Fareed Abdullah says the country can fix its HIV response. 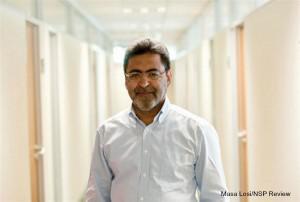 In January, South Africa will move to start HIV treatment earlier at a CD4 count of 500. CD4 counts are a measure of the immune system’s strength.

Under these new guidelines, the country will have to double those on antiretroviral (ARV) treatment to reach the World Health Organisation (WHO) “universal access” target of 90 percent of eligible patients on treatment.

At the close of the recent Southern Africa HIV Clinicians Conference, Abdullah spoke to Health-e News about the six ways he thinks the country can bolster its HIV response.

“Globally, one in five new infections occur in South Africa. The worst news of the Human Sciences Research Council’s (2012) findings was that one-quarter of all new infections are in young woman between the ages of 15 to 19 years so we’re seeing a more dramatic feminisation of the epidemic.

“You have a seven-fold higher probability of infection if you are a young woman aged 15 to 19 than your male peers do.

“If there is one priority in this country it’s to reduce new infections in young women. Whether that is targeting young women in the 10 to 14 year age group or older men who are infecting younger women – that’s all a discussion to be had but we have to set this up as a key target. We just cannot allow this to continue.”

2. Put prevention on the agenda.[quote float=”right”]”For sex workers to have condoms and antiretrovirals confiscated from them when they are arrested is just a blatant violation of rights…”

“We have to start with putting prevention properly on the agenda. We have to start with the basics. One of the big gaps in our prevention is the proper social marketing of condoms… (Government’s) Choice condom, after Durex, has the largest market share globally. Durex sells one billion condoms. We distribute half a billion condoms just in one country but we don’t market it.

“You open a Choice condom and it smells of latex badly – simple things can solve that. The packaging is not great. About 70 percent of our condoms are distributed in clinics – that’s not the place you go to for condoms. We need a big investment in marketing condoms.”

3. Realise not all vulnerability is created equal.

“We have to is dispel this 20-year-old myth in South Africa that because of high HIV prevalence there is no difference between the (HIV risk of) general heterosexual population and key populations. This is something that we’ve gotten wrong completely.

“We need now to focus on programmes targeting key populations … I mean sex workers, men who have sex with men, prisoners and a small group where transmission is very efficient – injecting drug users.

“A critical component (of the HIV response) is to address the human rights issues… For sex workers to have condoms and antiretrovirals confiscated from them when they are arrested is just a blatant violation of rights, which has a direct impact on our programming.”

“The way forward to making our treatment programme more effective is to address the health system challenges. If we want to more than double the number of patients on treatment, we certainly need to address challenges related to retention in care, viral load coverage and drug stock outs.

“We need to urgently address low tuberculosis (TB) detection and treatment success rates. If WHO statistics are to be believed and are compared to the national TB register, then we are missing 200 000 cases of TB every year… that is completely unacceptable for a simple diagnosis in a middle-income country like ours.

“(Current) levels of treatment success result in 80 or 90 000 patients living with HIV dying every year from TB.”

“Retention in care is a big problem with as many as 40 percent of patients being lost to follow up. It’s becoming absolutely critical now that we must have a unique patient identifier.

(A unique patient identifier is an individualised code assigned to patients that allows them to be tracked within the health system. Government approved the introduction of such a number a year ago, according to Deputy Executive Director of the Wits Reproductive Health and HIV Centre Dr. Francois Venter.)

“These days, with all the new technology it’s no longer true that the only solution (to creating unique patient identifiers) is for Home Affairs to do a smart card so that we can have one card over the next seven years. There must be a hundred solutions. I am sure…someone could write some sort of smart phone downloadable application. I am sure it’s possible, we must just make a big noise about it.”

6. “Test and treat” is coming. Plan ahead.[quote float=”right”]”There’s a lot of noise from the WHO that in a year’s time they will be recommending ‘test and treat'”

“There’s a lot of noise from the WHO that in a year’s time they will be recommending ‘test and treat.’

(“Test and Treat” is an approach in which HIV-positive people are put on ARVs as soon as they are diagnosed).

“If we decide to go to test and treat, and then we are going to have put six or seven million patients on treatment in this country. There is absolutely no way that the currently configured health system and currently configured ARV intervention can survive having to put seven million patients on treatment. It opens up whole discussion about whether we should be having a different sort of programme for ARVs…

“If we want to put another two million patients on ARVs in this country, we’d better look at some other options because the health system is straining under the current burden. We should be looking at putting a million patients on treatment in the private sector with the thousands of general practioners who are completely under utilised.

“We now for the first time at SANAC can tell you that we have 250,000 patients on ARVs in medical scheme disease management programmes. They are run well and their outcomes are good. We really should be looking at those types of option to expand our programme.” – Health-e News Service.