Tshwane health services set an ambitious goal to test more than 10,000 people in one day ahead of World AIDS Day and break the international world record. 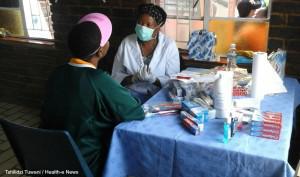 Free HIV counselling and testing started as early as 8 am in some Tshwane sites as part of a drive to set a new world record, according to Tshwane’s Deputy Director of Multisectoral AIDS Management Unit Thabitha Mosito.

Mosito added that when people know their HIV status, they can take charge of their health and also to help prevent new HIV infections.

“We want to intensify HIV testing because we haven’t (achieved the goal of) zero new infections in our country,” said Mosito, who added that HIV testing took place at three different sites across Tshwane including Soshanguve’s Block K Bible School. “All these events are reporting (their results) to a central place and by 20h00 we must set the world record of testing 10,000 people in Tshwane.”

Carried out in partnership with UNAIDS, testing was happened at several sites in KwaZulu-Natal. In Tshwane, the Vuk’Uwazi Institute for Social Change also facilitated additional health screenings including blood sugar and pressure readings as well as Pap smears.

Argentina currently holds the world’s record for the most HIV tests conducted in an eight-hour period after it tested 3,733 people in 8 hours to commemorate World AIDS Day 2012.

As numbers are tabulated, South Africa faces competition from Botswana and Ethiopia as local media reported that both countries will also looking to beat the world record in celebration of World AIDS Day 2014.