Local experts are cautiously optimistic about last year’s cervical cancer vaccine roll-out after Australian authorities announced that vaccine is already showing positive results seven years after it was introduced in the country. 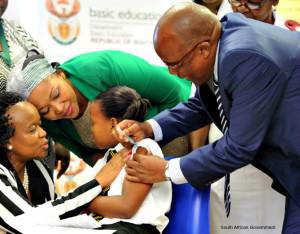 Last year’s HPV vaccination campaign wrapped up in November. The Department of Health is still calculating the campaign’s reach.

According to Brotherton, Australia began vaccinating girls against the human papillomavirus (HPV), which can cause cervical cancer, in 2007.

As these girls and successive generations of vaccinated young women have grown older, the country has seen a decline in potentially cancerous skin lesions among young women, she added.

“It is quite remarkable how quickly we are seeing reductions in the serious outcomes from this infection,” Brotherton said.

“I do believe it will have a significant impact… but I think we are unlikely to see as dramatic an effect as was seen in Australia,” Denny told Health-e News. According to Denny, South Africa is unlikely to vaccinate as large a percentage of young women as Australia, which conducted “catch up” campaigns among women as old as 26 years old. She added that South Africa’s high burden of HIV, which makes one more susceptible to cervical cancer, may also have an impact.

South Africa introduced the HPV vaccine into its national programme last year. Girls received the second of two doses of the vaccine in November.

According Department of Health spokesperson Joe Maila, the department is in the process of analysing coverage data from the campaign’s second round of vaccinations.

At the recent World Cancer Congress, Senior Programme Officer for the global health non-profit PATH commended South Africa and a handful of other African countries for successfully rolling out the vaccine nationally.

“A lot of people thought it couldn’t be done, or at least not done well, but we’ve proved the naysayers wrong,” said LaMontagne, whose organisation assists countries with developing vaccination plans.

A pilot study conducted ahead of the national roll-out showed that the HPV vaccine was well accepted by communities and that high vaccination rates would be possible. The study, published in the current issue of the South African Medical Journal, enrolled 2 030 Gauteng and Western Cape girls to study the feasibility of a school-based vaccination programme. A total of 1 782 girls completed three vaccinations while about 92 percent of girls received at least two vaccinations or enough to help protect them against cervical cancer. – Health-e News.