The Pretoria High Court has granted an application by Apartheid-era chemical weapons expert Dr Wouter Basson that may allow him to sack the chair of his ongoing Health Professions Council of South Africa (HPCSA) inquiry. 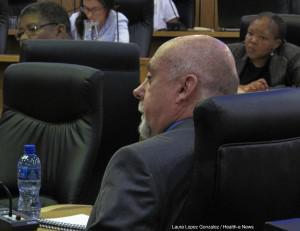 Basson may call for HPSCA Professional Conduct Committee Chairman Jannie Hugo to recuse himself from the HPCSA inquiry that will determine whether Basson will be allowed to continue practicing medicine.

According to Basson’s attorney Wynanda Coetzee, Basson now has 10 days in which to bring an application for Hugo’s removal to the High Court.

She added that the High Court had also instructed the HPCSA to cover the costs, including Basson’s attorney fees, involved in lodging the High Court application.

The HPCSA found Basson guilty of unprofessional conduct owing to his involvement in the apartheid chemical weapons programme “Project Coast” in December 2014.

On Monday, Basson’s legal team walked out of sentencing proceedings less than hour after they had begun at the HPCSA’s Pretoria headquarters after alleging Hugo had a conflict of interest. Headed by Advocate Jaap Cilliers, Basson’s legal team also demanded that both Hugo and fellow committee member Eddie Mhlanga review the petitions and disclose whether they were members of any other signing organisations.

According to Coetzee, Hugo and Mhlangu subsequently provided this information as part of affidavits.

Basson’s HPCSA sentencing is expected to resume 12 March. The health professionals body could not be reached for comment at the time of going to print.

During his time at Project Coast, Basson supplied weaponised tear gas to South Africa Defence Force and provided drugs used in cross-border kidnappings, and mass-produced drugs such as mandrax and ecstasy. –Health-e News.