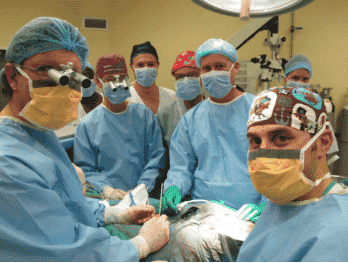 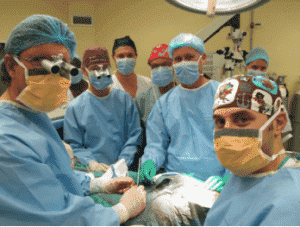 This pioneering operation restored the dignity of a 21-year-old man who lost his penis when it developed gangrene after a ritual circumcision, and it has probably also given him back the ability to father his own children naturally – something doctors hint he has been trying out for more than a month.

In a marathon nine-hour operation, doctors surgically transplanted the entire penis (from the glans to the base) from an organ donor. The patient’s own penis had to be amputated three years ago in order to save his life, leaving him with a stump no longer than 1.5cm after which he was unable to urinate standing up or have sexual intercourse.

The patient has made a full recovery from the transplant, which took place three months ago. He is able to obtain erections, urinate standing up and has regained sensation in the organ.

This is the second time that this type of procedure was attempted, but the first time in history that a successful long-term result was achieved.

“There is a greater need in South Africa for this type of procedure than elsewhere in the world, as many young men lose their penises every year due to complications from ritual circumcision,” Van der Merwe told Health-e News.  [quote float= right]”For a young man of 18 or 19 years the loss of penis can be deeply traumatic… there are even reports of suicide among these young men”

“This is a very serious situation. For a young man of 18 or 19 years the loss of penis can be deeply traumatic. He doesn’t necessarily have the psychological capability to process this. There are even reports of suicide among these young men,” says Van der Merwe.

The operation was part of a pilot study to develop a penile transplant procedure that could be performed in a typical South African hospital theatre setting.

“The research was conducted in partnership with local public health structures and will be delivered to the people who need it most,” says Dr Nicola Barsdorf, head of Health Research Ethics at Stellenbosch University’s Faculty of Medicine and Health Sciences (FMHS). “Once the surgery is made broadly available it will be offered in state facilities and accessible to vulnerable groups that are often unable to afford state-of-the-art health care.”

Nine more patients will receive penile transplants as part of the study. This procedure could eventually also be extended to men who have lost their penises from cancer or as a last-resort treatment for severe erectile dysfunction due to medication side effects.

The planning and preparation for the study started in 2010. After extensive research Van der Merwe and his surgical team decided to use some parts of the model and techniques developed for the first facial transplant. The surgeons connected blood vessels and nerves as small as 1mm to 2mm using microsurgery usually employed in plastic and reconstructive surgery.

“South Africa remains at the forefront of medical progress,” says Prof Jimmy Volmink, FMHS Dean. “This procedure is another excellent example of how medical research, technical know-how and patient-centred care can be combined in the quest to relieve human suffering.” – Health-e News.

Edited versions of this story first appeared in the 14 March editions of the Weekend Argus and Saturday Star newspapers.