With more than one in 10 health facilities nationally reporting a drug stock out in the last nine months, this year’s SA AIDS Conference may have been more about what’s missing than what’s been done in the country’s HIV programme.

At the conference’s close, Motsoaledi stressed that whistle blowers within the Department of Health should not face intimidation.

Research into medicine shortages by the civil society coalition Stop the Stock Outs Project cast a long shadow over this year’s national AIDS conference. Conducted among about 60 percent of the country’s health facilities and released this week at the conference, the project’s second annual survey found that a quarter of facilities had faced stock outs in the three months prior to the survey and almost 20 percent were currently experiencing outages on the day they were interviewed.

Tellingly, the country’s bi-annual AIDS conference already had sessions dedicated to helping health workers deal with stock outs prior to the report’s release.

In 2014, South Africa was the first to adopt ambitious international targets to ensure 90 percent of HIV-positive people know their status, access treatment and adhere well enough to treatment to control the virus by 2020. In the next financial year, almost R22 billion has been committed to fund the HIV response.

At the conference, Department of Health’s head of HIV, drug-resistant tuberculosis (DR-TB) and TB Dr Norbert Ndjeka revealed that the country has seen a 40-fold increase in health facilities treating DR-TB. TB remains a leading cause of death nationally and among people living with HIV.

He also announced more than R130 million will be dedicated to roll out two new DR-TB drugs, bedaquiline and linezolid. Activists toy-toyed for access to the drug at previous national TB conferences. 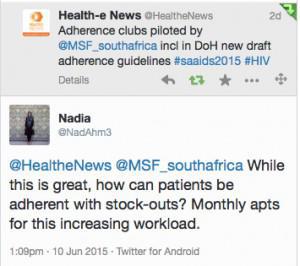 South Africa is also rolling out new community-based adherence strategies first piloted in the Western Cape as part of a forthcoming national strategy.

But shortages of drugs, which Stop Stock Outs Project’s Bella Hwang has called health workers’ basic tools, seemed never far from conversations – including those on social media where @NadAhm3 asked what good programmes were without drugs.

At the conference’s close, Health Minister Dr Aaron Motsoaledi hit back at allegations that the department had ever denied drug shortages and, more importantly – the logistical and management problems that Stop the Stock Outs Project alleges are behind most stock outs.

“We have to expect logistical problems,” he told Health-e News. “In a country that treats 30 percent of the world’s people living with HIV that there would be no problems? That would be a dream.”

He added that KwaZulu-Natal currently uses medicine barcode-based tracking system for stocks that alerts the National Department of Health to stock outs at clinic level. He added that this system will be rolled out nationally, starting in Limpopo.

A toll-free number 08000 123 22 has also been established to enable patients and health workers to report stock outs.

“Today, some media are reporting that the ARV programme has collapsed,” said Motsoaledi, who added that as of 4pm Thursday all provincial medicines depots had stock of South Africa’s most widely used ARV. “The ARV programme in this country will collapse over my dead body.”

Edited versions of this story were first published in the Saturday Star and the Weekend Argus newspapers.