The North West’s move to put more than 300 community health workers on bicycles has met resistance from workers and union representatives as they alleged they were never consulted about the bikes – and that they remain underpaid. 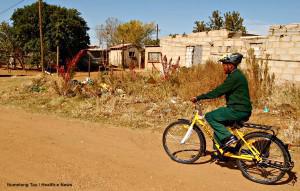 The more than 300 bikes recently distributed to the province’s community health workers are the first of many, say the North West Department of Health

The North West – and Gauteng’s Tshwane NHI pilot distict – are leading the country’s NHI pilots in the deployment of ward-based outreach teams. Comprised of community health workers and headed by nurses, these ward-based teams conduct door-to-door health screenings and education with a particularly focus on the health of pregnant women and children under the age of five.

Both districts have more than 70 such teams. According to Masike, the bicycles were meant to ease the burden of home visits and he added more were soon to come.

But the National Education, Health and Allied Workers’ Union (Nehawu) Regional Secretary Sello Hlatywayo told OurHealth that community health workers were not consulted about whether they would like to use bicycles for home visits.

“We don’t want the bicycles,” said Hlatywayo, adding that some of the health workers were too big to fit on the bicycles. “The workers might get involved in accidents or injured while using the bicycles.”

North West Department of Health Spokesperson Tebogo Lekgetoane said the department would work closely with the police and the traffic department to make ensure the bicycles are not stolen or misused and the community health workers were not harassed.

Dr Kenneth Kuanda NHI Project Manager Dr Uma Nagpal said no health worker would be forced to use the bicycles.