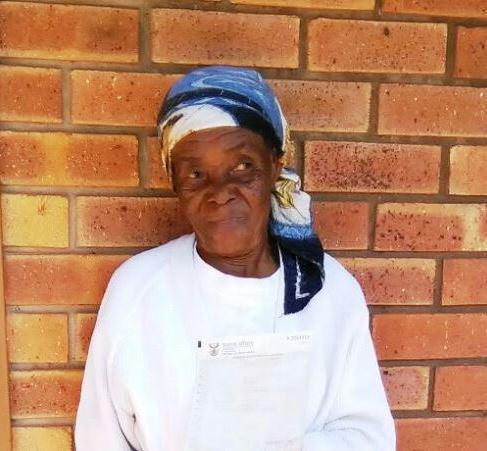 A social worker is trying to reunite a very ill elderly woman with her family.

Chronically ill and mentally confused, 85-year-old Dikomananyo Alleta Moeng has one wish: To be reunited with her family whom she has not seen since 1979.

Originally from Randfontein on the West Rand in Gauteng, Moeng came to Limpopo as a domestic worker for a construction company that was responsible for building Matatshe Prison (COR) in 1979.

The now chronically ill and mentally unstable granny said that after the completion of the prison she was left behind and did not try to go home as she had already made friends in Venda.

Peggy Mulaudzi, a social worker who had been taking care of Moeng since last year, said that Moeng was in a “very bad space” when she was brough to her attention last year. “She was unable to explain to us what had happened but after some time we were able to source out some information. Sadly it’s not enough for us to help re-unite her with her family”.

Born and bred in Randfontein, Moeng had five children in Gauteng before coming to Limpopo.

Before the Department of Social Development stepped in to help her, Moeng used to move around the Vhembe area, doing part time jobs, mainly as a domestic worker at various houses.

“We have now placed granny Alleta Moeng in an old age home as we are still busy trying to locate her family, whom she last had contact with them in 1979,” said Mulaudzi. The social worker said that everyone who might have any information that could help to re-unite the granny with her family is urged to come forward.

One of the positives is that Moeng will now be able to get her pension with thanks to the social worker.

Department of Home Affairs has issued Moeng with her first identity book in the form of a smart card. It was handed over to her at a function which was held at the Thulamela municipality offices.

Head of Home Affairs department in Vhembe region Zambo Maluleke said that after the social worker had brought the case to their attention they stepped in to help.

“Mulaudzi came to us and asked us if we could help her to apply for an I.D book on behalf of the granny. We assisted her as we saw that what she was doing was because of the love she has for her fellow citizens,” Maluleke told OurHealth.

The granny will now finally be able to apply for an old age grant. Thulamela municipality mayor Grace Mahosi praised Mulaudzi for looking after Moeng. “She is a hero and an asset to the community. If all people loved and do their jobs like Peggy Mulaudzi this country could be a better place, she is an important asset to the community” said Mahosi.

The mayor said that the municipality would do all they could to try and re-unite the lost granny with her family.