Home » Pupils back in school after classrooms, toilets delivered 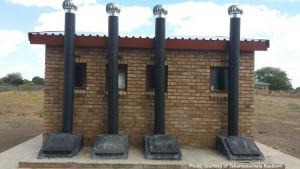 In January, a former pupil lead the installation of these new toilets at Limpopo’s Bale Primary School after Health-e News reported on the school’s lack of toilets.

The incident prompted parents to pull children out of the primary school and students at nearby Waterval High School to stay away from classes as well in solidarity.

Now, Hlalelani Primary School students are back in class after the Limpopo Department of Education delivered eight mobile classrooms and toilets to the school.

“Even though the classrooms and toilets are not enough, we are happy that our children will be able to go back to school and learn in the mobile classrooms instead of the dilapidated buildings”, said school governing body secretary Tshilidzi Mulaudzi. According to Mulaudzi, parents began complaining about the school’s conditions to the department of education in 2005.

Mudau told OurHealth she was relieved.

“My granddaughter can now go back to school without me fearing that something bad might happen to her,” she said. “The government has finally heard our pleas that the school is dilapidated, and that it needs renovation or temporary mobile classrooms”.

Department of Education spokesperson in Limpopo Dr Naledzani Rasila had previously said that although the department was aware that many schools faced problems similar to those at Hlalelani Primary School, the department did not have enough money to renovate all schools at once.

Rasila has assured the public that the department continues to do all it can to repair schools.

“We care and value the education of our children.” Rasila said. “We are doing all we can to make sure that all our schools are renovated and in usable conditions”. – Health-e News.