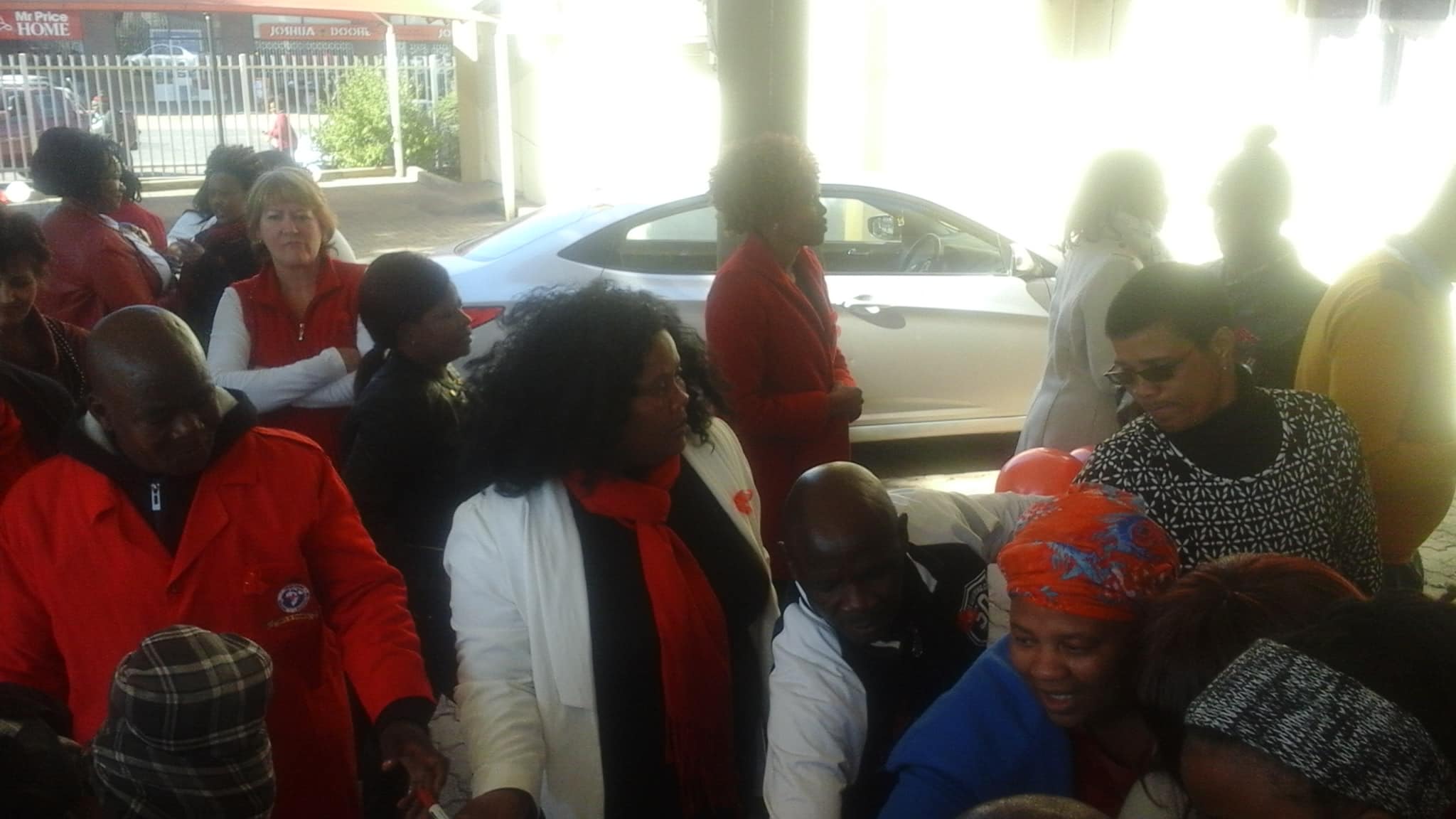 As the countdown to the 21st International AIDS Conference to be held in Durban enters the last few days, the John Taolo Gaetsewe District Municipality responded to SANAC Chairperson and Deputy President Cyril Ramaphosa’s appeal for coordinated activities to mark the event.

All eyes are on the World AIDS Conference 2016

Local residents and representatives from GCIS, the Road Accident Fund, municipal workers as well as HIV and AIDS activists joined forces in a co-ordinated road show of various events and promotions.

People walked through the streets and visited taxi ranks to talk to people and hand out information. Wearing red, black and white, participants went out of their way to meet and greet everyone in town and respond to questions related to HIV and AIDS.

Placards and posters were displayed and condoms were distributed around the Kuruman town centre. Extra efforts were made at identified hot spots such as the Grand Hotel (where sex workers usually stand) and taxi ranks in order to engage with taxi drivers, taxi assistants and passengers.

The issue of condoms came up strongly as an important issue during the feedback sessions.

Pule Mosegedi, a 24-year-old local resident, told Our Health that he felt that it should not be left to men alone to carry condoms.

Pule said he had met several young women who were not afraid of AIDS, but rather worried about pregnancy.

He volunteered to visit schools to talk to the young people about issues of prevention and self care.

During the walk different teams got different responses from the people they encountered and about 1800 male and 40 female condoms were distributed. Women said they experienced difficulties using the female condoms as it involved a complicated process.

“I tried and failed many times,” said 35-year-old Maria Ngwenya of Zimbabwe. She says she came to South Africa from Bulawayo, hoping for a better life. She said she was pleased with the health system here. She had delivered her first daughter here, and had been tested for HIV – something she had not done before falling pregnant in South Africa.

After visiting the town, participating teams were joined by John Taolo Gaetsewe District officials and the Executive Mayor, Councillor Sophia Mosikatsi who is also a Chairperson of the District AIDS Council. Proceedings moved to the Chamber for moment of silence and a candle lighting ceremony in honour of people living with HIV.

Sector Leader Agnes Sibi led the proceedings and explained the meaning of the coloured candles: red for those who had died of HIV and AIDS related illnesses; yellow for those who are sick, hospitalised or in hospice care as well as for caregivers and health care workers; and white being the candle of hope – remembering those still alive and those supporting the fight against HIV and AIDS.

She said the lighting of candles was a remembrance turned into action, recognising that there was a time when no treatment was available at all, and that today there is treatment in the form of ARVs that are saving lives.

In her response Nkele Morakeng, the HIV coordinator for the John Taolo Gaetsewe District reporting to the office of the Premier in the Northern Cape Province, encouraged participants to test for HIV and know their status. She also encouraged the participants to support the countdown to the World AIDS Conference by sharing AIDS information with others.

Local churches pledged to ring their bells for five minutes and use social media such Facebook, Twitter and Instagram to support these activities under the hashtag #5DAYS TO AIDS2016.

The day ended well with the mass releasing of balloons and the singing of ‘Phantsi HIV, HIV must fall’.

These awareness campaigns are set to continue at local level while the World AIDS Conference goes ahead as representatives from around the globe gather in Durban from Monday.