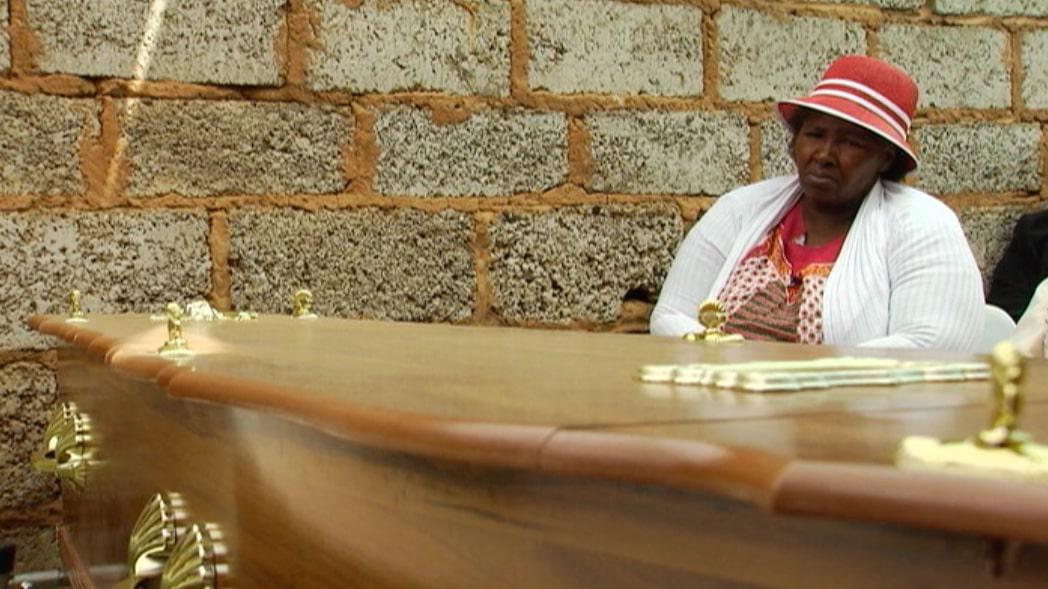 Bertha Molefe attends the funeral of her daughter, Sophia Molefe.

The Gauteng Health Department ignored dire warnings not to “de-institutionalise” over 1000 psychiatric patients from secure care facilities run by Life Esidimeni. Now 37 patients have died in a few months – and families want answers.

Bertha Molefe sat quietly, fighting back her tears, surrounded by family, friends and neighbours, whose voices rose together in mournful song. But Bertha didn’t sing or even seem to register the singing. She was transfixed – staring at the wooden coffin in front of her in utter disbelief. Lying still and silent inside the coffin was her 23-year-old daughter, Sophia.

In the months prior to her death, Sophia underwent the trauma of being moved out of the Life Esidimeni Randfontein Care Centre, where her schizophrenia had been stable for a year.

Following the Gauteng Department of Health’s decision to terminate its long-standing contract with the private healthcare provider, Sophia and over 1,000 other patients were discharged and relocated to their family homes and community NGOs by the end of June this year. Pursuing a policy of de-institutionalisation, the department defended the contract termination, saying it was in line with its plan to move away from treating psychiatric patients in old-fashioned asylum-like institutions towards more integrated, community-level care. 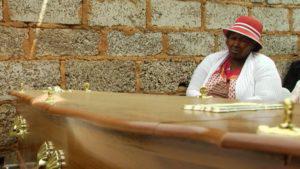 Bertha Molefe attends the funeral of her daughter, Sophia Molefe.

But families saw through this plan, alarmed by the rushed way in which it was being implemented. Reverend Joseph Maboe, whose son Billy was a patient at the Randfontein Care Centre, joined the chorus of concern.

“I said: ‘People, all of us here must remember we are dealing with human beings. If these people are going to be taken away, as I hear, we aren’t doing justice to anybody and we’re doing an injustice to them and to ourselves as parents,” Joseph recalled.

He was eerily correct. Like Sophia, Billy also became a casualty of government’s haste. Unbeknown to Joseph, Billy was moved from Randfontein to an NGO called Bophelong, over 100km away in Hammanskraal.

NGOs that are simply residential houses with no signage

A nondescript residential home down a dusty road, Bophelong has no official signage outside to indicate that it is housing close to 40 psychiatric male patients. When Joseph eventually managed to track Billy down, he was shocked by what he found. Billy was pale, gaunt, suffering from a bad cough and very hungry. Worst of all, he had lost control over his bladder so Joseph immediately asked for a doctor’s visit to be arranged. But that was the last time he ever saw his son alive. Two days after his visit, Billy was admitted to Jubilee District Hospital where he died four days later.

Appalled by the neglect his son faced, Joseph feels the blame for his death lies squarely on Bophelong and on Gauteng Health for sending Billy there: “That was the end, that was the end of my son’s life… they were just dumped there, dumped. It’s a dumping ground as far as I’m concerned,” said Joseph, shaking his head in disbelief.

Instead of being shut down following Billy’s death, Bophelong is still operating. According to staff at the NGO, MEC Qedani Mahlangu herself visited them in mid-September and said Bophelong was ‘satisfactory’.

The law must take its course. Even if we need to exhume his body, so be it”

But Cassey Chambers, Operations Director at the South African Depression and Anxiety Group (SADAG) says that the NGOs the former Life Esidimeni patients were relocated to don’t seem to meet basic requirements.

“The feedback from the family members is that these are new NGOs; they are people who have recently converted their house or taken on extra patients,” said Cassey.

“There are special criteria physically for what NGOs need to look like with access to bathrooms, to emergency exits, food, security and the most important thing, treatment programmes… and what we’re picking up from a lot of NGOs is that that’s not in place.”

Like Bertha and Joseph, Elizabeth Phangela has also had to bury a family member in recent months. Her brother, Christopher Makhoba, who suffered from epilepsy, was a patient at the Life Esidimeni Waverley Care Centre in Germiston for six years.

Elizabeth was not informed when Christopher was moved to the Precious Angels NGO in Danville near Pretoria. Run by Nompumelelo Ncube – also known as Ethel – Precious Angels operated out of two residential homes in Danville and Atteridgeville. They looked like ordinary houses on residential streets, with no visible evidence to indicate that they were homes for psychiatric patients.

Precious Angels has made headlines in recent weeks for being responsible for eight patient deaths. But, when Elizabeth received a fateful call from Nompumelelo on July 15, the death toll rose to nine dead bodies. This means Precious Angels is now responsible for almost a quarter of the 37 confirmed deaths of former Life Esidimeni patients.

Nervously setting out to identify her brother’s body, Elizabeth was disturbed by what she encountered. “I knelt down and checked him and discovered he was so stiff, as if he’d died long ago – and he was very, very, very thin,” she recalled, her eyes moist with tears.

Nompumelelo later admitted to Elizabeth that Christopher had actually died on July 3, despite her only contacting the family almost two weeks later with the tragic news. Elizabeth, consumed with anger and many unanswered questions about the circumstances leading to her brother’s death, has embarked on a desperate search for answers.

Having never seen Precious Angels, she travelled to Danville, intent on at least seeing the bed her brother died in. But when she arrived, the NGO had been boarded up and abandoned. All that remained were a few forgotten wheelchairs and hospital beds in the front garden.

They were just dumped there, dumped. It’s a dumping ground as far as I’m concerned”

Elizabeth has since opened a case at the Atteridgeville Police Station. “The law must take its course. Even if we need to exhume his body, so be it,” she explained.

While Elizabeth waits for the police to complete their investigation, Bertha has since buried Sophia.

When the contract with Life Esidimeni was terminated, Sophia was initially to be placed at a facility in Pretoria – far from her family home in Snake Park, Soweto. Fearful of her daughter being too far away for the family to make regular visits, Bertha declined the option of the Pretoria facility. She was given no other options, and Sophia then moved back home with Bertha.

But the situation soon began to spiral out of control. Sophia started to refuse to take her medication. She became angry and aggressive, the symptoms of her schizophrenia returning in full force. Bertha feared Sophia would harm her or, worse, run away and never return.

After Bertha’s plight was broadcast on Dignity Denied, a Health-e documentary on eNCA’s Checkpoint, the Department of Health stepped in to help Sophia get back on medication. They also promised to organise an adequate facility for her – but their promises remained empty. Before she was allocated a new care facility, Sophia overdosed on her medication and was rushed to Leratong Hospital where she died a few weeks later.

Bertha is distraught, the image of Sophia’s coffin slowly descending into her grave now etched in her memory forever. “I feel as if I should have died instead of Sophia because she was so young,” she lamented.

Sophia’s tragic end is not confined to the Molefe family alone. At least 36 other families have felt the pain of losing a loved one – now casualties of fly-by-night NGOs.

Health Minister Dr Aaron Motsoaledi has called on Health Ombudsman Professor Malegapuru Makgoba to investigate the deaths. He expects to finalise his report at the end of November. The families of the dead want answers and for somebody to be held accountable.