The Limpopo Department of Social Development is set to intervene and help a 25-year-old mentally and physically disabled man who has been denied his education and health care. 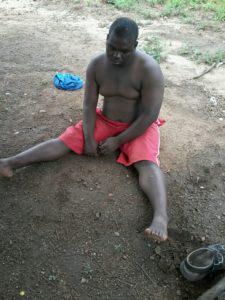 Tshilidzi Nematahe (25) was born with physical and mental disabilities and has never been to school. (Credit: Ndivhuwo Mukwevho)

Tshilidzi Nematahe (25) of Mpheni village, near Elim Hospital, was born mentally disabled. He also has physical disabilities as his left arm and leg do not function properly, and he occasionally has fits. He has never attended school, nor has he ever been given any medication.

But now – thanks to formal reports made by concerned villagers – authorities are preparing to step in and take charge.

Residents of Mpheni village have made numerous efforts to get Nematahe’s mother Lucy Ramuhashi to take him to a clinic so that he can be assessed and given medication if necessary. But she has continually refused.

“We have tried to advise his mother to take him to the hospital so that he can be given medication for his mental state, but we have not been successful. Even though he is not troubling anyone, he does have the right to proper health care and I feel like the ignorance from his mother’s side is denying him his right to have access to medication,” said one of Ramuhashi’s neighbours, who wished to remain anonymous out of fear of ruining his friendship with her.

“The mother should be advised that her son’s disability is not the end of the world and that she should not keep him in hiding. He was supposed to have gone to school and had the chance to play with other children,” the neighbour said, referring to Nematahe having been raised without going to school.

Ramuhashi said she did not believe there was any need for her to take her son to the clinic as he did not need any medication.

“Why should I take him to the hospital when he is not sick? I wish people can just back off. I will only take him to the hospital when there is a need,” said Ramuhashi. Asked why she had not placed her son in a special school, she said she was not aware that there was a school able to accommodate him with his various conditions. Nematahe also suffers from fits and often collapses.

Adele van der Linde, spokesperson for the Limpopo Department of Social Development, said: “Cases like this one are mostly caused by a lack of knowledge as to how to deal with people suffering particular conditions. We will intervene and help both the man and his mother. The mother needs to be advised correctly regarding her son’s condition.”

Van der Linde added: “Our representative from the department will visit the family and take it from there. We will do what we can to help him. It is sad because he is now 25 years old and has never been to school. But it is still not too late for us to help him and his mother.”

Thabiso Teffo, spokesperson for the MEC of the Limpopo Department of Health, said that his department will assist Nematahe and ensure that he receives any medication necessary. Nematahe and his mother are currently surviving off his disability grant as Ramuhashi is unemployed. – Health-e News.