The community of Diepsloot – a densely populated township in northern Johannesburg – is battling against a shortage of clinics and ambulances that serve the area. 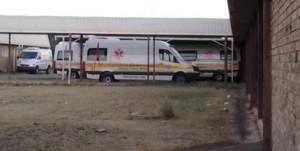 Diepsloot people who have medical emergencies are forced to wait for hours for ambulances.

Diepsloot and the surrounding areas, with a combined population of well over 80 000 people, are serviced by only two clinics and two ambulances.

Speaking on behalf of the community, Scelo Shezi – community leader in ward 95, said people have to wait up to four hours for an ambulance call out to the area.

“We do have an emergency centre here in Diepsloot, but it cannot cope. There are not enough ambulances to service the population of the township.”

According to Shezi, more public healthcare services were desperately needed.

“It is really a challenge for us. It would be better if our EMS centre had another four or five ambulances,” Shezi said.

He added that conditions generally worsened at month end. He said on many occasions people could call for an ambulance, and receive no response at all. Or the ambulance would only arrive after several hours had passed.

On many occasions people could call for an ambulance, and receive no response at all. Or the ambulance would only arrive after several hours had passed.

“This is really frustrating the community, because when the two ambulances are out delivering patients to hospitals, other people who have emergencies are forced to wait for hours for the ambulances to return,” said Shezi.

According to Shezi, ambulances are not the only problem. The local clinics are also overcrowded and unable to cope with the demands of the area they serve.

“We cannot be serviced by just two clinics for a population of about 80 000. We need more clinics.”

He said the OR Tambo clinic alone received about 9000 patients per month, despite the operating hours being from 8am to 4pm.

“But you find that sometimes the clinic closes at 8pm because of the high number of patients that need to be attended to,” Shezi explained.

The community leadership of Dieplsoot is in the process of addressing the matter with the Department of Health. They are asking that the OR Tambo Clinic be made a 24-hour operation.

“We need a facility that will operate around the clock. We are currently engaging with the DoH to ensure that it happens.”

There is high unemployment in Diepsloot, meaning that most residents are reliant on the public health care services and cannot afford to go to private doctors in the township. The demands placed on the local clinics and emergency services are therefore high.

The national target for the supply of ambulances in South Africa is one ambulance per 10 000 people. This is far from what is supplied in Diepsloot.

Arnold Lesiba Malotana, the CEO of Emergency Management Services in Gauteng, admitted that the ambulance response times in Diepsloot were poor, but there were reasons for this.

“There are several reasons which include the lack of hospitals in that area. Kalafong and Helen Joseph Hospitals are far away, which results in long travel distances and turnaround times for the ambulance to be available. There is also a massive volume of calls in the area, including non-emergency calls, which the department finds itself servicing,” said Malotana.

Malotana said the department planned to buy 150 new ambulances this year, but this was subject to Bid Adjudication Committee approval.

He said Johannesburg EMS had been called on to increase the number of staff and allocated vehicles to the Diepsloot Fire Station and as soon as there was suitable infrastructure in place, he said.