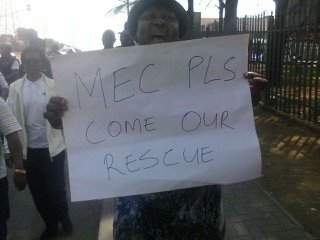 Services at the Masakhane Clinic in Alexandra have been severely disrupted as the staff has taken to protesting against what they believe is unfair treatment by the Gauteng Health Department.

The trouble started last month when traffic along London Road – the main route through Alexandra – was disrupted by burning tyres blocking the road. Patients turned back from the clinic and the staff picketed outside the clinic.

The staff claim that the clinic operated as a non-government organisation (NGO) for many years before it was taken over by the Gauteng Health Department two years ago. All the staff members were absorbed by the health department and were promised nothing will change with regard to their employment contracts and salaries. 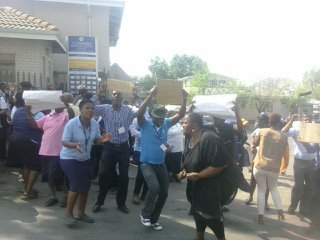 Staff protest outside the Masakhane Clinic in Alexandra.

However, it is now claimed by the staff that Gauteng Health Department has not been recognising long service awards, honouring severance payments and other benefits the staff enjoyed when the clinic operated as an NGO.

After a long-drawn series of negotiations spanning two years, their patience has now run out.
“We are very disappointed at this government. They say they don’t have money and they don’t owe us. We will never let our long service go down the drain like that. Some employees have been working here for more than 40 years, and now the government wants to take them on new contracts, ignoring their hard-earned benefits,” said Jabu Mafalala, speaking on behalf of the employees from National Education and Allied Workers Union (NEHAWU).

Mafalala said some staffers had not been paid for their outstanding leave days, and they no longer receive the bonuses they used to get on their birthdays.

He said staff planned to continue to picket every day during their tea and lunch breaks until their demands are addressed. However, he explained, they would not disrupt any of the key essential services such as the casualty and maternity wards that will continue to function as normal undisturbed.

Ernest Ndlovu, who served as deputy chairman of the clinic board before it was taken over by government, appeared perturbed when quizzed about the latest developments at the clinic, once the pinnacle provider of primary health care in Alexandra.

“As far I know we have handed over everything accordingly to the provincial health department. They took the clinic voetstoots,” he said.


The Health Department District Office acknowledged disruptions at the Masakhane Clinic in Alexandra but said they did not owe any money to the staff.

They said all employees received their salaries including the benefits every month. Explaining how the clinic had been transferred from an NGO to a government healthcare facility, the department said: “In order to ensure the smooth running of the transferring process, various committees were established including a human resources committee; a finance management committee and an infrastructure management committee in order to ensure all aspects of the changeover were properly managed.