7th January 2019 | Ndivhuwo Mukwevho
Eight-year-old Thendo Rasilavhi carried her dead mother’s portrait during a march in Venda to complain about domestic violence attacks in the area and to call for new efforts to deal with the situation. Pic: Ndivhuwo Mukwevho/ Health-e (File Photo).

An NGO that has helped scores of domestic violence victims for almost two decades faces an uncertain future after the Limpopo Public Works Department evicted it for failing to pay rent.

Another provincial department – Social Development – has written to Public Works asking it to reconsider and allow the Thohoyandou Victim Empowerment Programme (TVEP) to continue operating.

TVEP had been based in the Old Embassy, a Public Works building in the town of Sibasa, and the NGO has no idea where it will base its office when it resumes work next week. The eviction came ahead of the 16 Days of Activism and at the start of the December holidays when the NGO normally records a higher-than-average number of cases.

Attempts to evict the organisation from the building first came in 2017 when Public Works succeeded in getting an eviction order from the High Court in Thohoyandou. At the time Health-e reported that the TVEP stopped paying rent in 2009 but has been trying for many years to negotiate to either buy the building they are in – which hasn’t been maintained by public work for 20 years – or to pay a nominal rent on a long lease.

“We have been operating from the building for the past 18 years, and people have learnt to trust us to handle their matters because we are the hope of many victims,” said TVEP spokesperson Tshilidzi Masikhwa.

“And that is why we will continue to help people, even if it means operating out in the open or under a tree. People require our help… we cannot afford to disappoint them,” he said. The NGO was evicted after the Limpopo High Court ruled in favour of the Department of Public Works’ application last year.

Joshua Kwapa, the department’s spokesperson, said the NGO had been defaulting on rent for a while and had been notified of the consequences and results of the court application in September.

“We would be failing in our duty if we do not collect rental,” said Kwapa, adding that because of the important work TVEP does in the province he advised the NGO to ask the Department of Social Development for help.

He said the department has not yet received the letter from the Social Development.

Meanwhile, Masikhwa explained that TVEP could not afford to pay rent and had tried to negotiate a settlement with the department but was unsuccessful.

The rural-based NGO relies on foreign aid donations, which mostly covers its operational costs. The TVEP has more than 67 employees, some of whom are based at trauma centres at Donald Fraser and Tshilidzini hospitals.

“Over the years we have assisted more than 26,000 victims and we have become the first stop for victims of abuse. They know that we are the only place in the area where they can get the help they need,” said Masikhwa.

TVEP provides counselling, advocacy, support, access to medical examinations and anti-retroviral treatment to hundreds of people. Masikhwa said he was surprised that the same government which usually praises the NGO’s work does not want to come to its aid.

“We are here to help people and care for them, but little is being done to help us. Each day we restore hope and life to many victims,” he said.

Masikhwa has encouraged people to continue visiting their trauma centres at hospitals while TVEP searches for a place to operate from. – Health-e News.

After receiving a whopping R46.4-billion last year – the Gauteng Health Department will be receiving R50.8-billion this year.

Junk food and sugary drinks are fuelling obesity epidemics among school kids worldwide, according to the World Health Organisation (WHO). Packed lunches can help kids stave off extra pounds but only about half of South African school kids take lunch to school, many parents may be wondering what’s for lunch.

LIMPOPO – About 60 rural orphans from Tsianda village Drop-in Centre, outside of Thohoyandou, sang and danced with joy when food parcels were dropped off for them at the Thohoyandou Indoor Sports Centre. 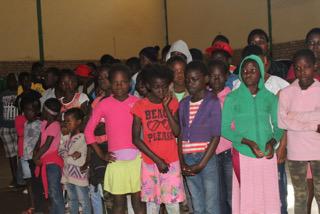