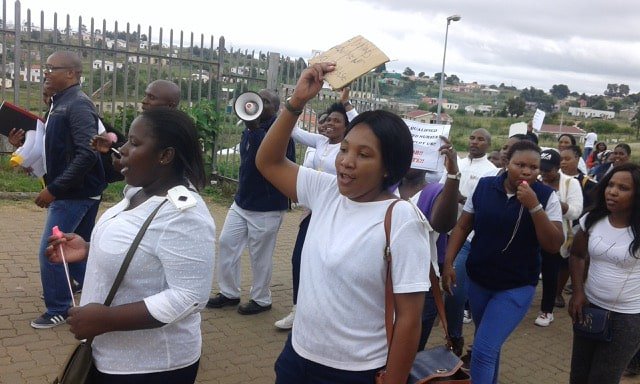 “No jobs, no vote,” shouted unemployed nurses who marched to O.R Tambo Health sub-district offices in Lusikisiki last week. The unhappy nurses sang, carried placards and handed over a memorandum demanding that the Eastern Cape Department of Health employ them in the Ingquza Hill municipality.

The nurses have formed the Unemployed Nurses Committee. The committee’s treasurer, Zandisile Jaca, told Health-e News said vacancies in the municipality are filled by nurses who are not from Ingquza Hill.

In December 2018 Minister of Health Aaron Motsoaledi announced the creation of more than 5,300 posts for health-care workers in clinical and support staff throughout the country but, Jaca claimed, “vacant positions here, for which we qualify for, are filled by nurses from other provinces”.

“We are aware of the Employment Equity Act which allows qualifying candidates to be placed anywhere within the country, however, when we apply in other areas we are usually told that preference is given to candidates who live within the jurisdiction of that particular health facility.  But we do not receive that preference at health facilities near our home,” she claimed.

“If we are not employed we will not vote,” Jaca vowed.

Nokwanda Maphetshana, a mother of four and qualified nurse, said she has resorted to hawking to put bread on the table for her family.

“When I graduated from Lilitha College of Nursing in 2009 I thought it was a dream come true, but little did I know that I would spend a decade unemployed. In May 2018, the Eastern Cape Department of Health announced R20-million was set aside to train nurses at the college. How can the department continue to train nurses while there is a batch of qualified nurses who are unemployed?” she asked.

The memorandum was accepted by sub-district manager Nomahlubi Mayekiso who promised to forward it to the Department of Health authorities.

The committee gave the Department of Health five days to respond to their demands. – Health-e News