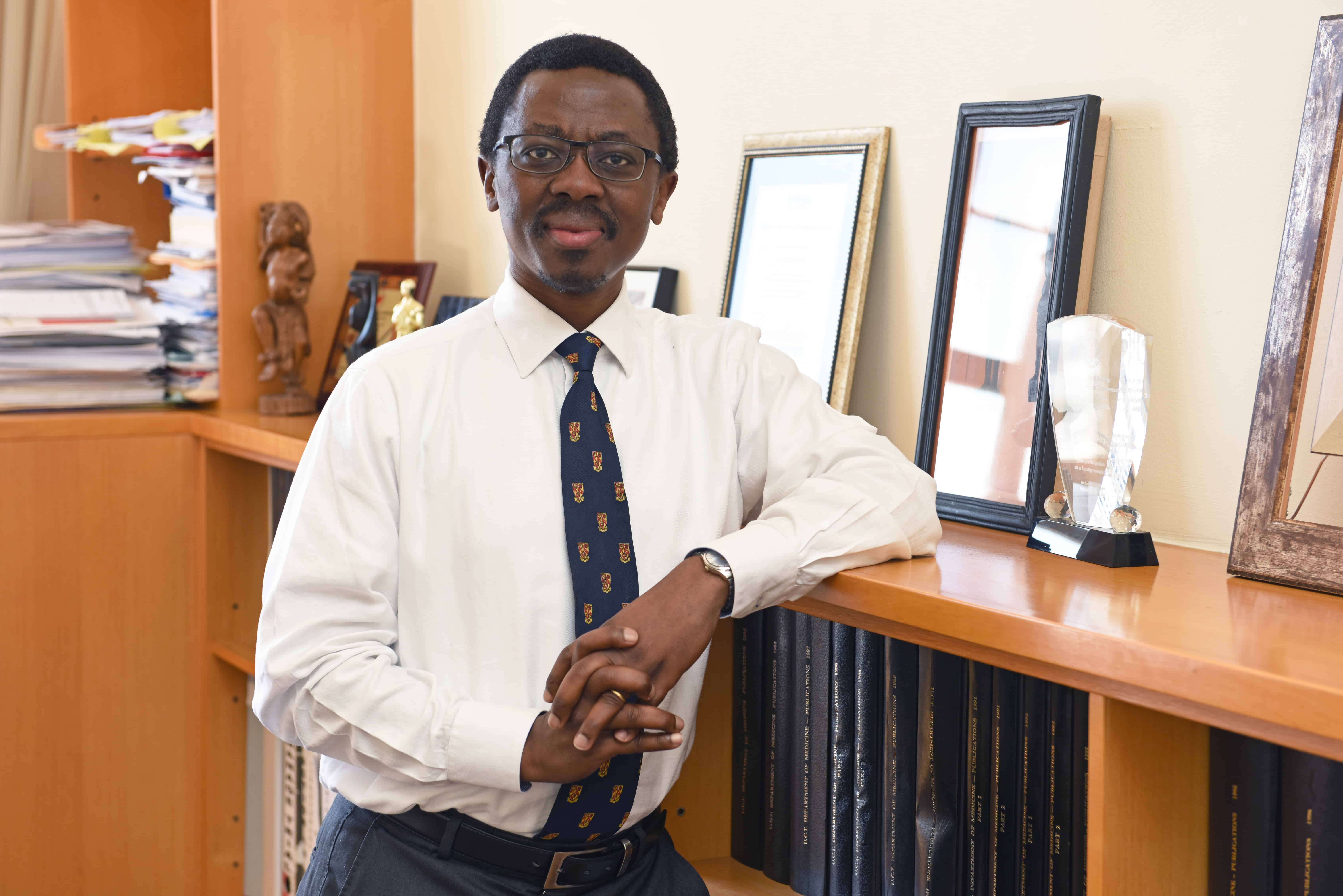 He has left an indelible mark on society. His untimely death more than a year ago, left both the local and global academic community reeling.

Described as a visionary leader, Professor Bongani Mayosi‘s mammoth contribution to academia and health research in South Africa and beyond, and his beautiful, brilliant mind will continue to inspire generations.

But Mayosi also modelled a unique kind of empathic and transformative leadership that was and is still sorely lacking in our country, on our continent and perhaps, globally.

As the University of Cape Town’s (UCT) Faculty of Health Sciences gathered in an intimate event to honour the life and legacy of their former Dean, speaker after speaker shared personal stories about the deep and profound way Mayosi had altered the trajectory of their professional careers.

Together they painted the picture of a leader who had a tremendous gift for harnessing raw potential, who inspired and motivated, who knew how to make people feel valued and validated, and who was hell-bent on kick-starting a generation of home-grown proudly African leaders, who would be equipped to tackle the specific health challenges of South Africa and the African continent.

“This man wanted me to dream bigger, to dream the impossible”, said specialist physician Dr Neliswa Gogela, referring to the now-famous conversation in which Mayosi urged so many students to stretch their dreams far beyond what their imaginations could conceive. Current Chair and Head of the Department of Medicine at UCT and Groote Schuur Hospital, Professor Ntobeko Ntusi said Mayosi “made being an academic cool” and contributed to an increasing number of black-trained cardiologists and other black specialists from his department.

From the “very green” first-year occupational therapy student, who confessed to being completely “starstruck” when he met Mayosi in his first few months, and was advised by Mayosi to stay at UCT and get a PhD; to the nurse with no prior experience in clinical trials who Mayosi took under his wing, to the hepatologist who described Mayosi as her “superhero” and “guardian angel on earth” — his leadership style transcended traditional student-teacher boundaries.

For young black students especially, he chartered a way through the uncertain territory, he instilled the idea that the “mighty UCT” could be an academic home, a place where they belonged. He provided a safety net, he offered his brilliant mind, he served as a trusted advisor, and he opened doors – including funding opportunities, authorship in important publications, and an opportunity to showcase students’ work on national and international platforms, and much more. He created a seat at the table for so many, and he did so graciously, with affirming words, and an irresistible sense of humour.

“I need you,” he said to Nurse Veronica Francis, who would go on to co-ordinate the first ground-breaking African-led clinical trials on tuberculosis pericarditis. “I trust you with this,” he told an anxious Lwazi Mhlanti before an important presentation to the African Union. “Come to the mighty UCT,” he urged Gogela, as she contemplated furthering her academic career.  And to the mother of Liesl Zuhlke, now a paediatric cardiologist, he committed to helping her to “climb the Everest of academia”.

In 2006, after being appointed only the seventh Professor of Medicine and Head of UCT and Groote Schuur Hospital’s Department of Medicine in its 87-year history, and it’s first black leader, Mayosi outlined what can be described as a kind of blueprint — his grand plan for transforming the oldest Department of Medicine in Africa into a thriving academic hub that would accelerate investment in young African leaders, who would be equipped to solve Africa’s health problems.

His inaugural address, entitled, The Future of Medicine was a carefully crafted masterpiece designed to draw attention to the “African origins of medicine”, to instil a sense of pride in African roots and to highlight the enormous challenges and potential on this continent.

Introducing the audience to the “Father of Medicine”, Mayosi described the wonderful character of Imhotep, an “African physician” who was the “world’s first universal genius and polymath”. He spoke about “the state of colonial and post-colonial medicine in Africa” and the devastating impact of South African apartheid policies on the health of this country’s people. He painstakingly laid out how the top five leading causes of death in Africa were as a result of “diseases of poverty” – including HIV/AIDS, tuberculosis and malaria — but also chronic diseases, such as stroke and heart disease. He outlined some of the major challenges preventing the development of strong and stable health systems in Africa – including the need for adequate numbers of skilled health workers, basic infrastructure and equipment; and effective health financing and health information systems.

Finally, Professor Mayosi shared his vision for the establishment of an “All African Institute for Clinical Research” that would produce at least 1000 clinical PhD scholars who would “change the fortunes of clinical medicine in Africa for the next 100 years”, quoting the former Deputy Vice-Chancellor of UCT, Dan Ncayiyana, who said: “Only when a critical mass of African researchers working on African soil has been restored will Africa begin to generate new knowledge relevant to its most pressing health problems”.

But Mayosi wasn’t just a dazzling orator and charismatic leader. He went on to do the hard work, confronting many of the issues he raised in that milestone speech – tackling diseases of poverty endemic to Africa, contributing to health policy and health systems strengthening, and investing in perhaps his most cherished vision, nurturing and growing young African leaders.

As Head of UCT’s Department of Medicine, he ushered in an era of what he described as a “renaissance in academic activity” with record numbers of publications being produced each year, and members of his department gaining national and international recognition for their contributions to clinical science and medical education. He transformed the Department of Medicine to “be the largest and leading medicine department on the African continent”, according to Ntusi. “He brought Africa to the world and the world to Africa,” said Francis.

Countless awards and achievements followed Mayosi, including South Africa’s highest national honour, the Order of Mapungubwe in Silver; an A-rating by the National Research Foundation; and election into the US National Academy of Medicine – which recognises individuals who have demonstrated outstanding professional achievement and commitment to service.

For Mayosi, perhaps the biggest praise would come from his beloved students who said they were “almost always warmly welcomed not as his oldest students but as his dear friends”, who said, “he wasn’t tall, he wasn’t muscular, but I felt protected”, who said Mayosi “knew instinctively that there was something greater inside me”, who said, “he gave me his undivided attention”, and who said, “I wanted to be him completely – father, dean, Head of Cardiology, black man who could come down to my level…”.

In his book, Leaders eat last: Why Some teams pull together and others don’t, Simon Sinek, wrote: “True leadership is about empowering others to achieve things they didn’t think possible”. Mayosi reimagined a kinder and more caring approach to leadership. Forsaking the trappings of power and prestige, he modelled a values-based style of leadership, so conspicuously absent and so desperately needed in these turbulent times.

Mayosi’s life story is reminiscent of a famously misquoted line from an 80s movie called Field of Dreams: “If you build it, they will come”.

He built it. And they came.

From klein dorpies and rural villages and humble beginnings across South Africa and beyond, bright young minds could finally imagine themselves walking the corridors of the seemingly unreachable University of Cape Town.

Bongani Mawethu Mayosi will be sorely missed. But his leadership legacy lives on. For years to come, these hallowed halls will reverberate with the stories of a humble young man from a little town called Ngqamakhwe, in the Eastern Cape, who came to UCT with twinkling eyes and a broad gleaming smile, and made it his Field of Dreams.

Thania Gopal is a Communications Officer at the University of Cape Town’s Health Sciences Faculty. She is a Senior Atlantic Fellow for Health Equity in South Africa, and holds a Masters degree in Public Health, a Business Science degree from UCT and BPhil (Journ) from Stellenbosch University.