Home South African Health Facilities #LifeEsidimeni: How long is the road to justice?
October 9, 2019 Posted in: News
Posted in: News

#LifeEsidimeni: How long is the road to justice?

It’s been two years since the beginning of the historic arbitration. We take you on the journey of seeking justice for the deaths of 144 mental health patients.

It was an autumn Monday in Parktown, Johannesburg. The heat felt like mid-summer temperatures. Seats in the room are quickly filling up — from Gauteng’s number one citizen to family members to lawyers and the media trying to find space for the perfect shot.

The anxiety in the room cuts through the heat. The nation is on standby. On this day, former deputy chief justice Dikgang Moseneke delivers his long-awaited judgement. After months of heartbreaking testimonies and denial from government officials fingered as the ones responsible for the tragic deaths of 144 mental health patients — the moment of truth is finally here.

Moseneke sets out the R1,2million award in constitutional damages and funeral expenses that the Gauteng government should pay as compensation for the deaths of the patients and the trauma caused to their loved ones.

Christine Nxumalo, who lost her sister Virginia Machpelah, tells the media that this is only a halfway house to justice.

Health-e News put together this timeline to commemorate the start of the Moseneke-led arbitration on 9 October 2017.

The SA Depression and Anxiety Group (SADAG), SA Society of Psychiatrists (SASOP),  SA Federation for Mental Health (SAFmh) and families try to engage the department about their concerns regarding the termination of the Life Esidimeni contract.

Concerns of families and lobby groups are not adequately addressed. Public interest law organisation SECTION27, which represents families, launches litigation against the department. A settlement is reached between the two parties. The department agrees not to move any patients until all parties have an agreement on the process and facilities.

Gauteng health department announces that all mental healthcare patients will be moved out of Life Esidimeni by the end of June 2016.

The department attempts to move 54 people to Takalani, a home in Soweto. SADAG, SASOP, SAFmh and families — represented by SECTION27 — litigate against the provincial health department to prevent the move. The court rules in favour of the department.

The arbitration heard the department misled the court to allow the transfer of patients to a facility that was unable to meet their needs.

The first Life Esidimeni patient dies. Deborah Petla was transferred to Takalani. According to her mother, Maria Petla’s testimony, she was moved to the home on the 23rd. Six days later, she receives a phone call to inform her Deborah was no more. She passed away on the 26th. Her post mortem results revealed she died from drowning in her own blood and that her stomach contained two bottled up plastics the size of a fist. Several pieces of brown papers were also found in Deborah’s stomach along with partially digested food that resembled samp with beans.

All mental healthcare patients are moved out of Life Esidimeni. Many are sent to unlicensed non-governmental organisations (NGOs). 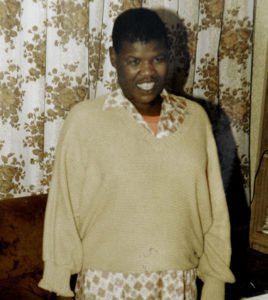 In the wake of the ombud report, Health-e profiled 10 Life Esidimeni patients including Deborah Phehla (pictured on the left) and the circumstances around their deaths. This provides a glimpse into the dignity denied to both mental healthcare patients and their families before, during and after the fatal move.

To avoid legal dispute between the state and families of Life Esidimeni victims, the Gauteng government set up an arbitration led by former deputy chief justice Dikgang Moseneke. The arbitration is projected to be three weeks long, but it was later extended into a 44-day sitting with an additional two days of closing arguments and a day for Moseneke to deliver his judgment.

In his judgment, Moseneke says: “ The transfers (of the patients) were degrading and inhumane. Many of the destinations were plainly treacherous and some were death traps and sites of torture.”

Moseneke recommends that government reports implicated officials to their professional bodies. This includes Selebano being reported to the HPCSA as a medical practitioner, former head of mental health Makgobo Manamela and her deputy Hanna Jacobus to the South African Nursing Council (SANC).

It’s been two years since the journey of justice for Life Esidimeni victims — those who died and those who survived — started. It’s been more than three years since Mahlangu announced the deaths of at least 36 patients in the province’s legislature. But it’s been a road filled with officials refusing to take responsibility. There have been no arrests,  but 144 lives were lost.

Will families ever get the justice they seek? Will this journey to justice ever end? Will South African ever know the real reason behind the Gauteng health department’s decision to move patients?

During his ruling, Moseneke said: “All we can hope for is that one day, the true reason for the conception and project will see the light of day.” – Health-e News

Patients with mental health issues in Limpopo have been abandoned by their families at a facility. It is one example of the challenges associated with stigma.

A team of psychologists will today (Monday 4 September) be visiting the Khulamlambo Primary School in Mpumalanga after a 9-year-old pupil committed suicide at the school on Friday.