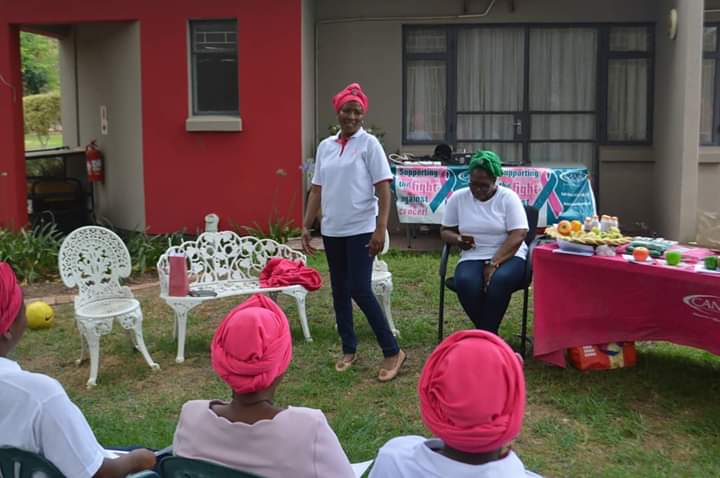 Cancer treatment is emotionally and physically sapping, but little thought is given to how it drains a patient’s medical aid or bank balance if they are accessing private health care.

Due to the high cost of treatment, cancer survivor and activist, Kwena Kola (46) says the fight against cancer has left her financially drained.

While battling cancer, Kola, from Letsokoane Village in Moletjie outside Polokwane, says the exorbitant prices of treatment put her under financial constraints. She resorted to paying out of her  child’s tertiary fees because her medical aid became exhausted.

“It has financially strained me because in 2016 when I was diagnosed with cancer I had a child who was at university and didn’t qualify for NSFAS [National Student Financial Aid Scheme] because I’m working for the government. I had to pay tuition fees. At the same time I was building a house, and I had to pay for the treatment.”

She says she conquered breast cancer in 2015 but faced another battle when it resumed three years later when she was diagnosed with secondary cancer, this time L1 vertebral cancer.

“I had just started to tell myself that I am a breast cancer survivor when last year around March, I started feeling pain on my right rib. Initially, I assumed that it was due to kidney stones, ovary cyst or fallopian tubes. It was just a minor pain and I would go to a doctor to give me injections and pills. Around September I started realising the pain was persistent and serious [so] I visited an oncologist. I explained how painful it was and asked they perform tests to determine what could be the problem,” Kola explains.

Kola had to undergo radiation for months and endured horrible side effects of chemotherapy.

According to Fix the Patent Laws, a campaign co-founded by SECTION27, Treatment Action Campaign (TAC) and Médecins sans Frontières (MSF), “100 million people around the world each year are being pushed into poverty because of healthcare expenses. High prices cause avoidable human suffering, inequality and poverty”.

“The cost of cancer treatment is too high, if you don’t have medical aid you will have to pay close to R700 000 when you are taking the private route. At private hospitals you are always assured that your treatment is available,” Kola says.

She mentions that though it is cheaper to go to a public health institution, the road to recovery is too long due to challenges of shortage of medication and lack of resources.

“The government is unable to assist us because people can’t get treatment in time and remember they don’t have enough resources as most cancer patients are referred to Polokwane Provincial Hospital, yes it’s free but it takes time, I have met someone who has been [on] treatment since 2012,” she says.

She indicates that she would arrange with her oncologist on payment plans to cope with the cost.

“Sometimes I would pay R20 000 or R10 000 after the medical aid got exhausted because in June there would be nothing left and I have to pay from the pocket and it is stressful. I do an arrangement with the specialists on how to pay them monthly,” says the special school educator.

The mother of two founded a support group in 2016, Conquerors of Cancer Support Group (CCSG) an outreach programme for cancer survivors and affected families.

Kola now aims to raise awareness on the importance of getting checked by doctors regularly and early detection for cancer.

“People must not ignore signs, they must not just dismiss it as a lump. In my case if I could have acted fast maybe I could have saved my breast. Even on medication, they should not default because it might come out strong, and it can be fatal,” she advises.

Her outreach organisation boasts over a 100 members with branches from Mokopane, Burgersfort to Phalaborwa. – Health-e News