Breast cancer incidences are on the rise globally, and a Limpopo cancer survivor hopes to destigmatise the diagnosis and treatment process through educational videos on Youtube.

Diagnosed with triple negative breast cancer at the age of 30, Mawisa Chauke wants to squash the myth that cancer is caused by witchcraft and only affects the elderly, and she’s using Youtube to do just that.

Chauke, from Matiyani village in Limpopo, was diagnosed with stage three triple negative breast cancer early last year — a diagnosis that floored her, as she thought she was too young to have breast cancer.

“Like any human-being when I was told I had cancer, I was shocked and cried, while also asking myself many questions like ‘Why me?’. But deep down I told myself that cancer is just a disease like any other, and it’s not a symptom of witchcraft,” she tells Health-e News.

She continues: “It was late December in 2018 when I felt a huge pain in my left breast but I thought it was caused by a bra I was wearing. When I touched my breast the following day, I felt a huge lump.”

Due to the persistent pain, she went to see a doctor who told her that it “cannot be cancer.”

“I did the ultrasound and I was told to come back after six months since the lump was huge,” she adds. The medical professionals suspected that Chauke had fibrocystic breasts, but after running more tests, doctors confirmed it was triple negative breast cancer.

This type of cancer tests negative for the most common types of receptors known to increase breast cancer growth. According to The Lancet Oncology, African women, and women of African ancestry bear the burden of triple negative breast cancer, due to genetic predisposition to the condition.

“Breast cancer incidence is increasing worldwide, and breast cancer-related mortality is highest in women of African ancestry, who are more likely to have basal-like or triple negative breast cancer than are women of European ancestry,” says the journal article.

‘Cancer can affect anyone, at any time’

Mawisa The Survivor, Chauke’s recently launched Youtube channel, is a space she wants to use to educate and inform South Africans about the disease, hopefully destigmatising breast cancer diagnosis, especially in rural areas where cancer diagnoses and ill-health are often attributed to witchcraft. 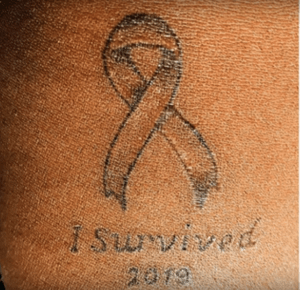 “We, as Africans, need to run away from the mentality that cancer is caused by witchcraft — which is totally wrong and misleading, especially to the younger generations. Cancer, like any other disease, can affect anyone at any time,” she says.

Chauke, who is a single mother of one and works as a social worker, says she was fortunate to receive treatment at a private health facility in Gauteng, although it came at a steep price.

Over 8 000 women in South Africa were diagnosed with breast cancer in 2014, according to figures from the country’s National Cancer Registry. One in 27 women in the country will develop breast cancer during her lifetime, making it and cervical cancer among the leading cancers in women.

Chauke has just returned to work after being in-and-out of hospitals for treatment. Her treatment schedule included 16 chemotherapy sessions, five radiation treatments and four surgeries.

She adds: “Through my journey with cancer, I saw my hair fall off, my tongue and nails turn black, and I also saw my body appearance change. I embraced all those changes, knowing that it’s all part of cancer and not witchcraft. If we notice something unusual in our bodies, we need to get medical help, and stay away from the “xiloyi loyi” [witchcraft] mindset, as it delays people from getting treatment on time.”

According to the World Health Organisation (WHO), there is growing evidence that the African region is facing a major public health challenge due to the rising burden of cancer. WHO projects that by 2030 Africa will bear some 1.6-million new cancer cases with 1.2-million deaths.

“My whole life changed. The way I see life changed and it also changed how I see other people,” says Chauke in one of her videos.  -Health-e News