Home » ‘The extreme sport of killing and raping women and children’ 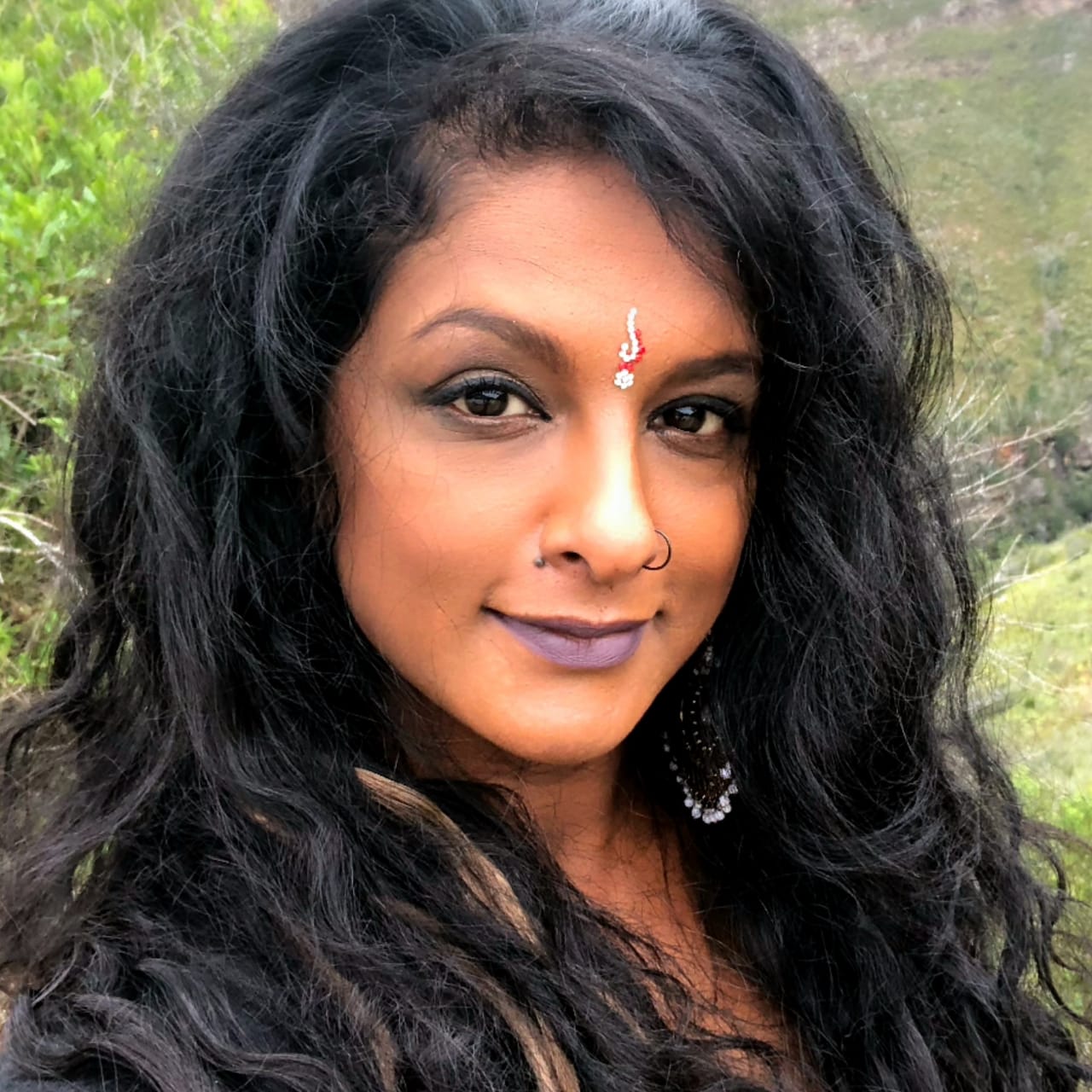 I am driven to the darkest place of despair inside my head, every women killed is a knife to my heart and a scar on my already tattered soul, writes Vanessa Tedder. She encourages everyone to speak up when they see or suspect abuse taking place

The names, the faces, the stories become too much for me as I suspect it probably does for you too. Strung from a tree in a bold and despicable “don’t mess with a man” display, Tshegofatso Pule never got to hold her baby, who was still deep inside her womb. Pule, who was eight months pregnant, was found stabbed and hanging from a tree in Durban Deep in Roodepoort last week.

How do we ever forget Anene Booysen, who was gang raped in 2013, her abdomen slit open, her insides ripped out? She should have by all accounts died within minutes, but she barely held on and whispered a name of one of her killers before taking her last breath, a warrior till the very last second.

So many women, so many dreams, so many hopes, their life … wiped out in a second, each time by acts of violence where each killer, each man, it seems, tries to outdo the other. Chop her body into pieces, burn her alive, hang her from a tree for the world to see, gender-based violence (GBV) has become a national sport. And men are signing up by the dozens every day. As for women, we can only hope and pray it’s not one us next or someone we love.

I am writing and I am going to do my best to keep it together. Because you see, these murders and rapes they don’t just upset me. It cripples me to the point of where I can’t breathe, where I want to set this world on fire, where I just want to close my eyes and never have to open them again. But I hear my daughters laughing or see my son tinkering with his cars and I am bound to stay here in this world for longer. So I stay, battling the resurrected demons – the memories of punches, kicks, slaps, vicious words spewed into my face and buried in my head – the trauma that lingers in my every pore, all these things tangle and suffocate me. But I stay and try to fix this disease with nothing more than just words and tears, for my children and for every other women and child.

I got away. I was lucky. Lucky! What a word to have to use.

I woke up on a winter‘s evening in 2005 face down on the ground in the parking lot of the SABC in Durban. To this day, I don’t know what he did to me that ended up with my forehead so garishly swollen and the skin on my nose and chin ripped off. I don’t even know how long I had been out for, I don’t know if he intended ending my life but some unseen hands and voices guided me back to this world. I had just started my job as a television news reporter at e-TV and those injuries ensured I couldn’t go on camera for a while.

I wrote a book about my experience. It was meant to be cathartic. I was supposed to be miraculously purged of all my sorrow and secrets. That book nearly pushed me over the edge because it forced me to ask the brutal questions. How did I never stand up for myself then? Why the hell didn’t I speak up then? I once cowered and shrank into the shadows because who wants to be seen as a victim, more so when you are on radio and tv. 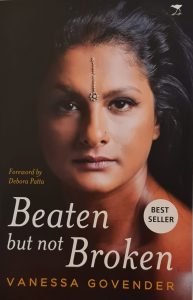 Beaten But Not Broken, a memoir about being an abusive relationship, written by Vanessa Tedder: Supplied photo

“Don’t,” my husband said, “Don’t judge the girl you were by the woman you are now.”

My abuser, a former well–known Lotus FM DJ, told me he loved me so much it drove him to violent displays of love so he would slap me, kick me in my stomach, rape me after assaulting me. Why am I telling all this? It is a critical stepping stone that you must take to come to where I need to take you next. And you may not necessarily like this place nor want to acknowledge it.

But I am taking you there anyway. So if you can’t bear to hear what I am saying then consider yourself a big part of the problem.

And speaking of, I worked among some of the biggest names in the broadcasting industry. From the pulpits of their microphones on social media, they express their outrage and fear about being a woman in South Africa,  every time a high-profile case makes the headlines, they hop on the bandwagon. They do some exceptional work on television, going after the bad guys, championing the rights of women and children. Yet my esteemed and socially conscience colleagues, despite having first-hand knowledge of my abuse or even suspicion of my abuse, said and did nothing.

At my book launch in Johannesburg in 2018, a former colleague from Lotus FM came to me, held me, looked into my eyes and said, “I hope you know we were always watching you.” Well, I hate to break it you sister, you guys didn’t do a very good job! I almost died in the car park. But hey life goes on right?

So my abuser was allowed to keep his job despite the rumours and suspicions circulating, neither of us were ever called in to answer to it. Even those who knew for a fact, did nothing to prevent the SABC rehiring him after he was fired for a different transgression.

Stop telling women to get over it, move on, and it’s all in the past. Don’t tell women to shut up or tone down, or mind their language. Don’t tell us not to get angry, how to vent our anger, or to take the moral higher ground. Don’t tell us our abusers have wives and kids and lives and we are going to ruin it if we talk about what they did. You do not get to tell a woman how to speak or when to move on!

Men are not just the problem. Some women are complicit in this evil, the ones who protect the abusers, even when the butchered body is lying in front of them, even when the little girl has blood pouring out of her vagina, they will deny and defend..

Stop asking government what are they going to. This requires more than political rhetoric and promises vomited out every time national outrage is sparked by a horrific murder. We mourn for the faces we see on the front pages of newspapers. Then we move on, and forget.

This extreme sport of killing and raping women and children demands that every law-abiding citizen in this country get involved and to make it their business. These filthy men are our brothers, our fathers, our cousins, our friends, our work colleagues. We know who they are, we know or at best suspect what they do. Don’t repeat the unforgiveable mistakes of some of my media colleagues and get involved! Image is important to abusers, the fear and shame of their victims are what fuels their fire and desire to draw blood.

Turn on them! Stop protecting them! And please understand this, women in these relationships know it’s dangerous, they know it’s never going to stop, but many are incapable of even admitting to what is happening to them let alone shouting out the name of their abusers. It’s been one of the things that has plagued me even more after the release of my book. Why can’t I still say his name? The fear never abates, his name is stuck in my throat, a lead ball that makes it hard to breathe. My brain and my mouth begging to get it out. The psychology of this is so deep and so confusing to those who have never been through it. Words are my tools, words are my companions, I know thousands and thousands of words, yet I can’t say one stupid name.

The journey to purgatory is never–ending and for each one who was “lucky” enough to get out, it’s very different. Some will roar, some will whisper, some will just quietly slip away and opt never to talk of it and some will battle, vacillating between just saying his name and not. Because you can walk away from abuse, you can get away from your abuser, but it never leaves you, the fear for him never quite abates.

And there is much to fear because the system isn’t really designed for women like me. With all the resources available to me, with all the people I know, I still have no clue how to get justice. I have been to the courts when I was a journalist reporting on cases of rape. Many years ago I told the story of a rape survivor’s quest for justice, her case postponed over and over and over. More than a dozen times. Every time her courage crushed and shattered.

So you must be crazy if you think I, or many other women, are going to put ourselves through the indignity and trauma of depending on a flawed system that doesn’t care about us.

I will spare you the sanctimonious sermon about teaching your sons about the meaning of no and that being a man isn’t about hitting a woman, or to tell your daughters to look for the signs. The biggest joke ever is how we inadvertently excuse men from their behaviour by making it a woman’s problem and responsibility, watch how you dress, don’t back–chat, and so on.

If I leave you with anything at all, let it be this … don’t look the other way. Please make it your business. I implore you to get involved. Find out where they work, let the company know. Let their friends and family know. Even if the woman in the relationship is silent, even if she may rise to defend him (as abuse victims  sometimes do), do not surrender. This is war so never underestimate the power you have to save a life. – Health-e News

Vanessa Tedder is the author of Beaten But Not Broken, a memoir about being an abusive relationship. She is a former news journalist who has worked in radio and television.