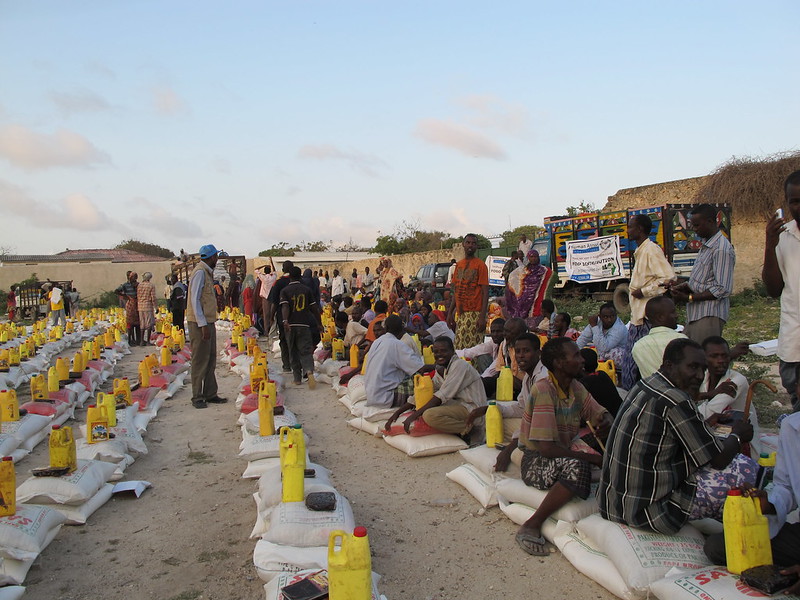 Communities take it upon themselves to donate food to those in need during COVID19. (Credit:Human Appeal/Flickr)

Under the current lockdown level, food donations may be made by charitable organisations, and North West and Free State communities rallied together to ensure that vulnerable community members are helped.

In the Free State, Rutang Bana Pre-School in Botshabelo’s Section T has donated toothpaste, body lotion and soap to fifteen children. Lerato Chabeli, founder of the pre-school, says that small children are often forgotten about when donations are distributed.

“Children are the new generation we should teach them to care, love and protect. They will do what we teach them. Often, the social relief measures are put in place for adults and children are forgotten, so we are doing our small part,” she says

Matsietsi Moremoholo, who received the toiletry and cosmetic donation for her daughter says that Chabeli has “made me feel good because our children aren’t neglected just because pre-schools are closed.”

The I Help the Disadvantaged Foundation has distributed sanitary pads to high schoolers in Botshabelo.

“With the help of local businesses, we have been able to donate sanitary pads to girls at Kgorathuto High School, Ntemoseng Secondary School and Kgothatso Intermediate School,” a statement from the foundation reads.

Moeketsi Diba, secretary of the organisation, says they have been raising funds from individuals and enterpreneurs to buy at least 10kg of maize meal and 2l of cooking oil for each food hamper.

Mareletsi Mamofolo, a pensioner in Botshabelo, was delighted to receive food parcel donations and a promise to renovate her dilapidated shack.

“I thank for the people who will help me fix my shack. I have been living outside,” she says.

Botshabelo based hip–hop artist Thamsanqa “Flabba” Milela usually celebrates the month of June by donating food parcels to twenty young people who are the head of their household.

“I lost my mother whilst in Grade 8 and I had to care for my younger brother on my own until I received financial help from another young person, so I want to help those young people who are in similar situation as mine back then,” he explains.

In Makapanstad in Moretele Local Municipality, North West, Gift Of Life Foundation (GOLF) donated food parcels to 49 orphans at Tlhonolofatso Orphanage. With only Grades 7 and 12 back at school, learners who are still at home or in orphanages still face hunger due to not being able to access their school’s feeding programs.

According to Abraham Modau, the food parcel distribution is in the memory of his late daughter, Lefuno Modau, the founder of the foundation who passed away earlier this year.

“Its aim is to empower the child headed or orphans around the area of Moretele Local Municipality,” adds Modau, who went on to say that the foundation will continue in her honour.

“The foundation’s spirit will not die with her,” he says.

Kgomotso Nhlapo, now in her twenties, was helped by the late Lefuno and GOLF when she was younger. She described her journey with the foundation as “life changing”.

“The reason I’m part of GOLF now is because I want to make the same difference in other children lives – as they did for me.”

Madiseko Mashishi, founder of Tlhonolofatso Orphanage emphasised the importance of donations during the Covid-19 outbreak, as Mashishi is facing financial difficulties which has made it difficult for her to feed needy children.

“Since lockdown I have been struggling to feed the children and our activities have even been put on hold as there are no gatherings allowed,” she says.

The orphanage was established in 2017 after Mashishi sought to build her community, as according to her “it’s infested with drug abuse and gangsterism.” The organisation caters for children aged from five to 18-years-old. At the orphanage, they are taught computer skills, homework help and feed children.

Tshegofatso Lobisi, one of the 49 children to receive food parcels, expressed how excited she was, saying “this shows that there are people who care about us even during Covid–19.” She was tearful throughout the parcel handover.

“I wish more people could come and donate because it might seem like nothing, but it makes a huge difference in our lives.” – Health-e News