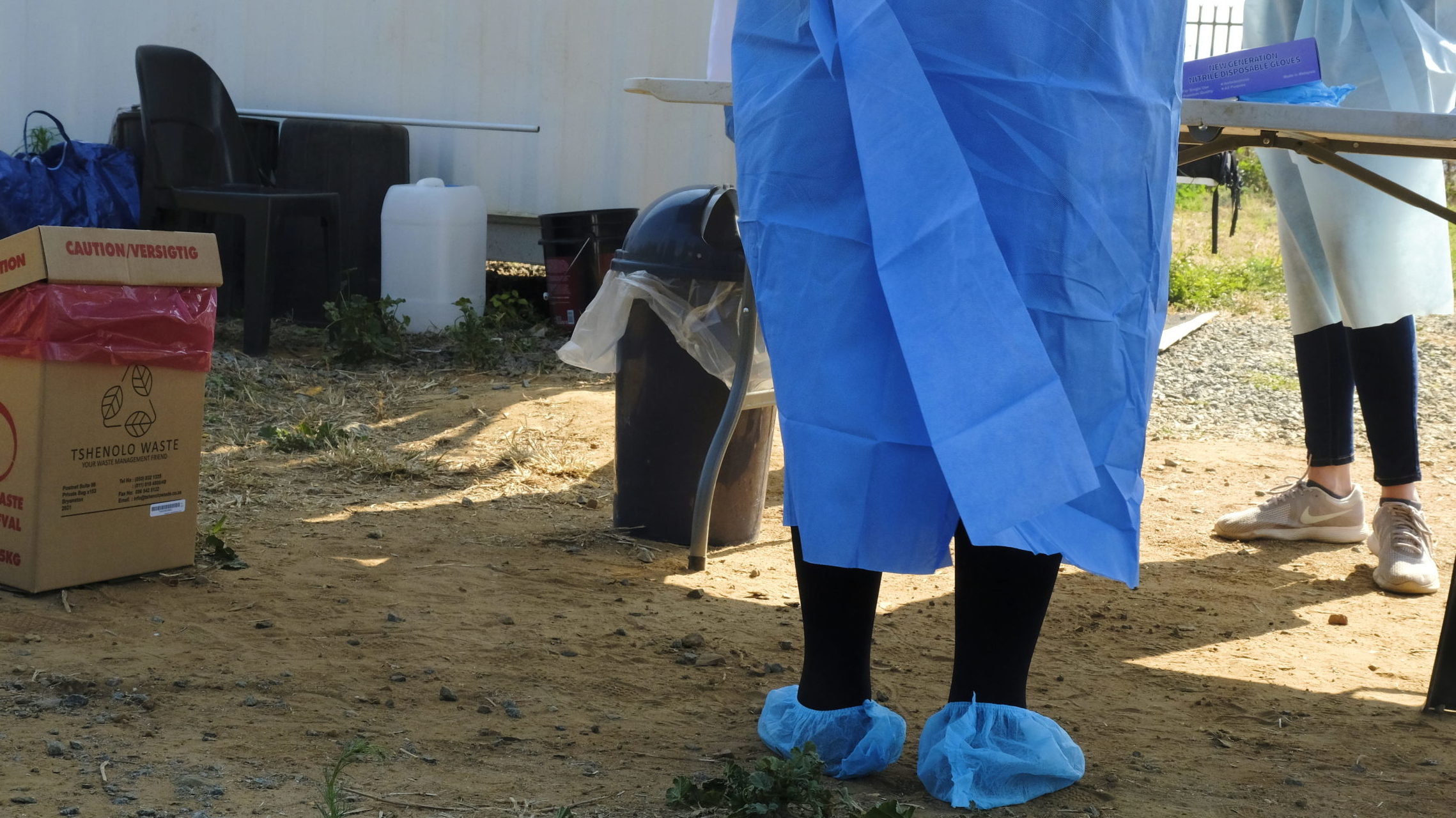 A community health worker waits for clients outside a makeshift clinic in Johannesburg. (Elna Schütz/Health-e News)

An estimated 55,000 Community Health Workers put their lives on the line each day to ensure healthcare access to the communities they live and work in nationwide. Earning as little as R800, these workers are demanding that the government absorb them into the National Health Department, writes Jamaine Krige.

Fed up with risk and low salaries, Community Health Workers to strike for job security

Lesedi* started his career in community healthcare as a volunteer eight years ago, relying on a stipend and then minimum wage for much of that time. Then in July this year, he became a formal employee of the Gauteng Department of Health, earning R8,500 before deductions.

“I might be permanently employed now, but it doesn’t feel legitimate yet,” he tells Health-e News.

Lesedi is one of an estimated 55,000 community health workers (CHW) who are integral in providing primary healthcare services to the communities they live and work in. Lesedi is also an exception: many of these frontline workers still earn a small stipend. Some earn as little as R800.

CHWs do not have the benefits or protection of formally employed healthcare workers. This vulnerability became glaring during the Covid-19 pandemic, when many became frontline workers, carrying out screening and other services. This is why they’ll be going on strike next week.

The industrial action is set to start on Wednesday, 11 November. The National Education, Health and Allied Workers Union (Nehawu) has called the government’s refusal to legitimise community health workers “reckless and exploitative.”

The union says the CHWs strike will form part of their broader strike for better working conditions and salary increases. Workers are expected to picket at the healthcare centres they are affiliated with. The union wants the state to employ CHWs on a level three salary, with the same benefits as other public servants. While some CHWs in Gauteng, like Lesedi, are employed and now earn salaries, other provinces have not followed suit.

“They work at a grassroot level, taking healthcare into people’s homes, yet they are very poorly paid and work under harsh conditions with no job security,” says Khaya Xaba, Nehawu spokesperson. The Covid-19 pandemic proved their importance beyond a doubt, he adds. These were the people on the frontlines, conducting mass screenings and community testing initiatives, especially in rural areas and townships.

Part of the problem is the lack of formalisation and standardisation for CHWs. While some earn a monthly stipend without a pension or Unemployment Insurance Fund (UIF) contributions, others are employed at minimum wage of R3,500.

Dr. Atiya Mosam is a medical doctor and a public health medicine specialist. She says CHWs play a vital role in health promotion and prevention of disease in the communities they work in.

“They improve access by bringing care out of facilities and closer to the community, and provide a link between communities and their health facilities,” says Mosam.

Mosam believes the national health department should employ CHWs rather than outsourcing their services via non-governmental organisations. This would recognise their role in the public health system.

“They need to be consistently trained and career-pathed so that they are providing a similar service across the country and also feel valued and integral to the health system,” she says.

CHWs support health education, carry out screening and treatment support and monitoring for diseases like TB. They are also typically women who are active in their communities.

A vital part of pandemic response

“Pandemics and epidemics occur in communities and they can only be ended in communities through social and behavioural changes in line with health recommendations,” says Mugoni. “Public health responders on large operations are often not from the area or even the country. They may not understand the cultural context and it may take a lot of time to gain the community’s trust.”

Community health workers provide a bridge that can buy public health responses valuable time. Even as the national government took the lead on the Covid-19 response, they relied on these grassroots workers. It’s a similar approach the United Nations and other agencies used in the Democratic Republic of Congo to stop the spread of Ebola.

Without formal employment, community health workers do not have access to job protection, workplace compensation or psychosocial support. This makes them particularly vulnerable if they contract the very diseases they are combatting.

When NGO support in a crisis ends, she says, some community caregivers continue to work without pay. “This is not ideal—it is tantamount to subsidising the government’s responsibility to provide quality healthcare to citizens.”

The Gauteng provincial health department’s efforts to formalise CHWs and pay them salaries on government’s level two tier provides an example to the rest of the country. Still, it took much effort on the part of unions and NGOs to get to this point.

“The country is indebted to the community healthcare workers who for so many years did their jobs with absolute integrity and honour, even when they were extremely exploited by the government,” says Kagiso Makoe, spokesperson for the National Union of Public Service and Allied Workers (NUPSAW). “Failure by other provinces to follow Gauteng’s lead will leave us no choice but to render those provinces ungovernable.”

NGO Right2Know threw their support behind Gauteng CHWs, working with the Gauteng Community Health Care Forum since its formation in 2015.

“Their role is priceless. They work in vulnerable communities and are not afraid to engage, even in the Covid-19 situation,” says Right2Know’s Gauteng coordinator Bongani ka Mthembu. “The Department of Health must take care of these people as soon as possible so that these workers can continue to do their work, as their passion and their calling.”

The National Department of Health did not respond to queries about the role of CHWs and the planned strike.—Health-e News

*Not their real name