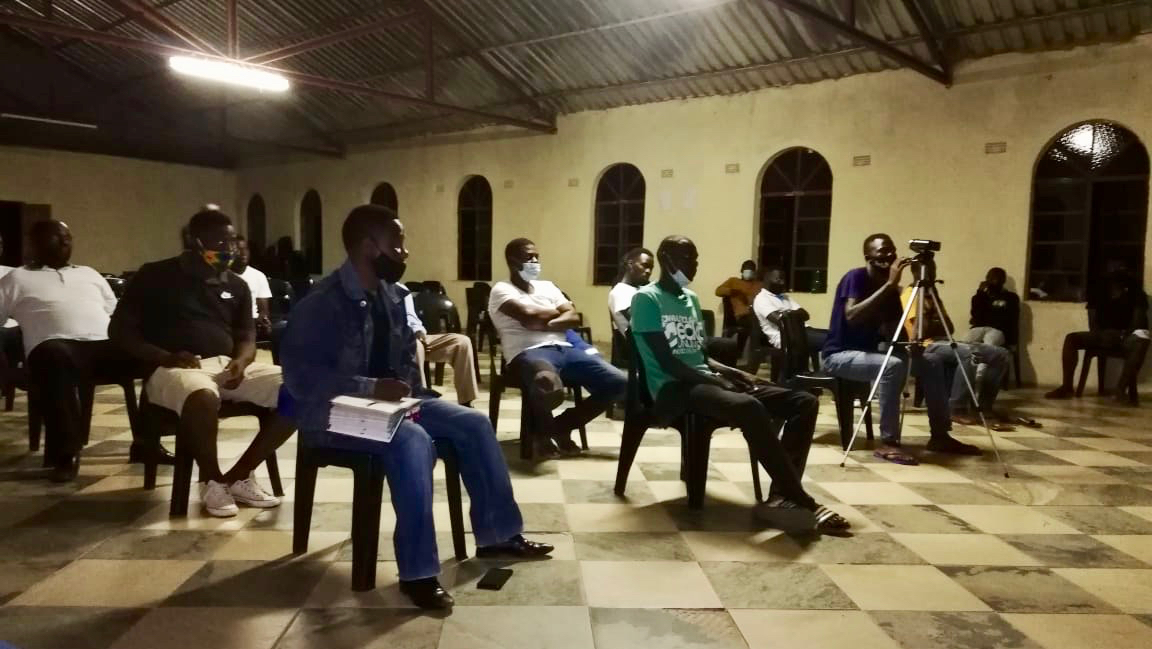 As part of the global #16 Days campaign, a group of men in rural Limpopo came together to discuss gender-based violence. They learned anger-management techniques and how to hold each other accountable.

Men in rural Limpopo say they are fed up with the level of gender-based violence (GBV). They believe educating each other about anger management can be a solution to the worsening situation.

On a recent Saturday more than fifty men from Makushu village outside Louis Trichardt in Limpopo attended a Men’s Talk with the theme ‘#Men have the solution.’ Seated in a hall, with each man socially distanced from the other, they had an honest conversation about the scourge of GBV.

“The talk was an eye opener as I was able to learn many things about how to treat women and children,” said forty-seven-year-old Joseph Maluleke who attended the talk. “Most importantly we were educated about how to deal with anger issues as anger is among the causes of gender-based violence.”

This talk in rural Limpopo is just one of the events taking place around the world as part of the #16Days of activism against Gender-Based Violence. Activities began on 25 November and runs to 10 December. This year the global theme  is ‘Orange the world: Fund, Respond, Prevent, collect.’

According to the United Nations (UN), one in three women worldwide experience some sort of physical or sexual violence by an intimate partner through their lives.

The UN defines violence against women as “any act of gender-based violence that results in, or likely to result in physical, sexual or mental harm or suffering to women, including threats of such acts, coercion or arbitrary deprivation of liberty, whether occurring in public or private life.”

In South Africa police and other data show up to 26 percent of South African women report intimate partner violence in their lifetime.

Yet, even collecting accurate data on the real extent of violence the situation is difficult say experts. Some believe the real figure for domestic violence alone is twice the number reported.

Maluleke believes that more information would make a big difference.

“Ignorance and lack of knowledge is also among the reasons behind GBV in our communities,” he said. “Men do not want to admit their wrongdoings, but instead they continue to abuse women and children to show their masculinity and it is very wrong.”

“I believe that if these kinds of gatherings are held all the time, most especially in rural areas, we could eradicate GBV in our areas,” said Maluleke. “We as males need to educate ourselves about GBV as we are the perpetrators and it’s only us who can eradicate this diseases.”

Courts in the Vhembe area of Limpopo dealt with more than 13,000 GBV cases this year. These included rape, domestic violence, murder and various forms of assault.

“This monster does not only exist in urban and townships but also in rural areas,” said Tovhowani Solomon Mbengwa, who organised the gathering.

The 28-year-old maintains that all men, whether young or old, need to work together to eradicate GBV. It’s up to men to help create a safe environment, he adds. Women and children should be able to live without fear of being abused by men in their lives, he adds.

“The state president declared GBV as a second pandemic in our country hence we decided that if we can gather as men and have a man-to-man talk to try and help each fight this pandemic,” he explained.

During the talk, activists educated men on how to deal with anger issues. They also learned skills on how to solve problems without using violence and how to share problems with one another.

GBV awareness at Mokopane hospital. MEC of Health encouraged women to stand up and prioritise their lives not culture.
Women should walk the talk. Lebitla la mosadi is where she wants to be buried not bogadi. pic.twitter.com/vX9v8jm4DW

“When you listen to the media, one would think that GBV only exists in suburbs or townships but it does exist in rural areas also,” said Mbengwa. “It is just that it is under-reported due to stigma associated with it and discrimination. As men from rural areas we need to understand that GBV is an evil act and a scourge that must be curved.”

Do not look away

While addressing the province in November, Limpopo Premier Stanley Mathabatha called on every sector of society to fight abuse against women and children and not look away when an abuse takes place.

“The message against the abuse of women and children is a year-round message,” said the Premier. “No one should be made to think that we are only vigilant during this period of 16 days of activism on violence against women and children.”—Health-e News