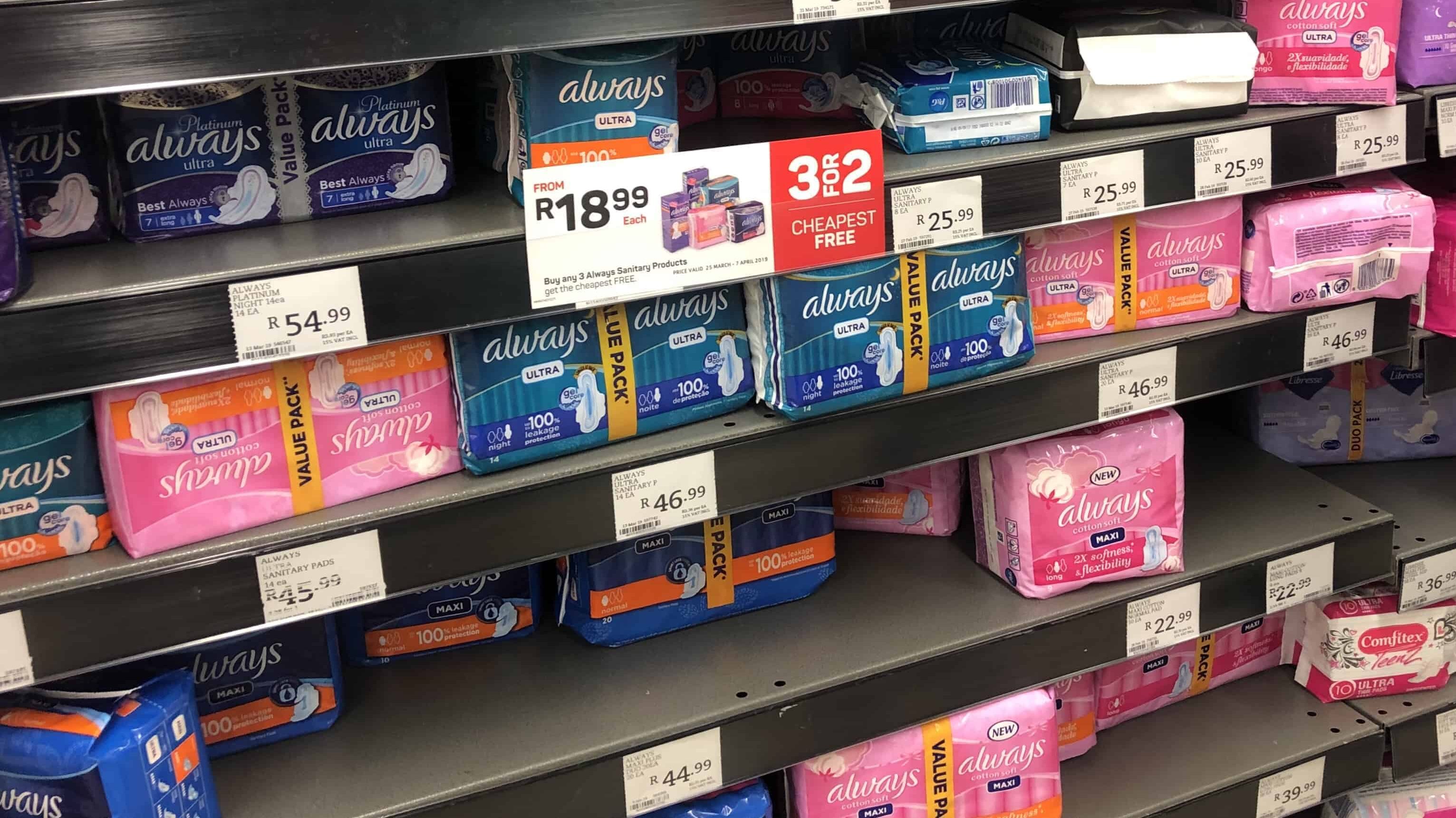 With budgets diverted to food parcels, nearly 180,000 Gauteng learners did not receive dignity packs, which include sanitary towels. Health-e spoke to learners who were left vulnerable by the decision.

Thousands of Gauteng learners were left vulnerable when the provincial Department of Social Development (DSD) failed to deliver their dignity packs in recent months.

The Department of Women, Youths and Persons with Disabilities (DWYPD) launched the Sanitary Dignity Programme in 2019. The programme was meant to implemented for quantile one to three schools. The National Treasury also made funds available so that the programme could run in all nine provinces.

But according to the Parliamentary Monitoring Group and the DWYPD, COVID-19 and the resulting lockdown measures hampered the implementation of the programme in the 2020/2021 period.

The dignity packs contain sanitary pads, a roll-on deodorant, soap, toothpaste and body lotion. But Health-e has learnt that the contents inside the packs differ from school to school and so does their frequency of the delivery. What’s more, the COVID-19 pandemic has caused further inconsistency.

Nthabiseng Masilo* (12) is now in Grade 7 and she says several months passed since she received a dignity pack last September, when she was still in Grade 6.

Learners at Masilo’s school receive the dignity pack which consist of a pack of sanitary pads, a roll-on deodorant and soap.

“I don’t know why we didn’t receive the packs in October, November and December, but we did receive them when schools reopened in February,” she said.

But her friend Lerato Nkomo* (13) has not received any pack since she started Grade 8 at a school in Ivory Park.

The last time she received a dignity pack was just before the December school holidays. The pack only contained three packs of sanitary pads.

“We received three packs of pads in December when I was in Grade 7, but we haven’t received anything since I started Grade 8 at the new school,” she told Health-e News.

The inconsistent delivery of the dignity packs leaves learners like Masilo and Nkomo vulnerable. The insecurity affects their confidence levels and their performance at school.

“I don’t like that sometimes we receive the packs and sometimes we don’t, because your period might start when you’re at school and you won’t know what to do once you get the blood stains on your uniform. I want the government to give us the packs every month,” said Nkomo.

Masilo shared the same sentiment as her friend: “I want our government to give learners these packs, especially the Grade 6 and Grade 7 learners because without the sanitary pads inside those packs, we end up with blood stains while we are at school and that is not good.”

Menstruation Activist Candice Chirwa says not having access to sanitary products is an obstacle to the learners’ ability to participate fully in their socio-economic activities.

“The DSD not prioritising dignity packs shows the lack of urgency in resolving period poverty for poor learners. They [DSD] need to understand that access to sanitary products is vital in ensuring that poor learners do not miss out on any school days,” said Chirwa. “Not only that, not providing dignity packs provides a real health risk as poor learners who menstruate will resort to using items including newspapers, cloth, or unhygienic materials.”

According to Chirwa, “the DSD needs to remain committed to its priority and help those in dire need of assistance.”

In the second quarter of the 2020/2021 financial year, 179,606 learners in the province did not receive the dignity packs from the department, according to the report by the Parliamentary Monitoring Group.

In the DSD’s special adjustment budget for the 2020/2021 financial year, R83 million meant for dignity packs was reprioritised towards food parcels. The Gauteng DSD did not respond to Health-e’s request for comment.

The Democratic Alliance in Gauteng through the Shadow MEC for Social Development, Refilwe Nt’sekhe, said that the DSD lacked compassion towards the plight of poor learners in the province.

“The money was reprioritised for food parcels and whilst we recognised that food insecurity increased during COVID-19, it does not take away from the fact that these learners still needed these dignity packs. Menstruation for girls does not stop during COVID-19,” said Nt’sekhe.

But according to the spokesperson for the MEC of the Gauteng DSD, Feziwe Ndwayana, an assessment was done to look at the kind of impact that the shifting of funds would have on the distribution of the dignity packs.

“Based on the assessment of commitments in terms of awarded contracts at the time as well as linking this to the annual target of 1.2 million dignity packs for distribution, and considering the impact that the lockdown had on the distribution of dignity packs, the department determined that the shifting of funds would not affect the target set,” said Ndwayana.

According to her, the budget was revised downwards from R161.5 million to R78.5 million based on the impact of slow quota 1 delivery on the overall target for the financial year and and with the revised budget, the same output could still be realised.

The department has also appointed a second service provider to distribute 600,000 dignity packs to learners in the province.

Ndwayana adds that, “The department is working on a long-term tender to avoid delays and disruptions in the distribution of dignity packs.”—Health-e

The Department for Social Development responded after the publication of this story.