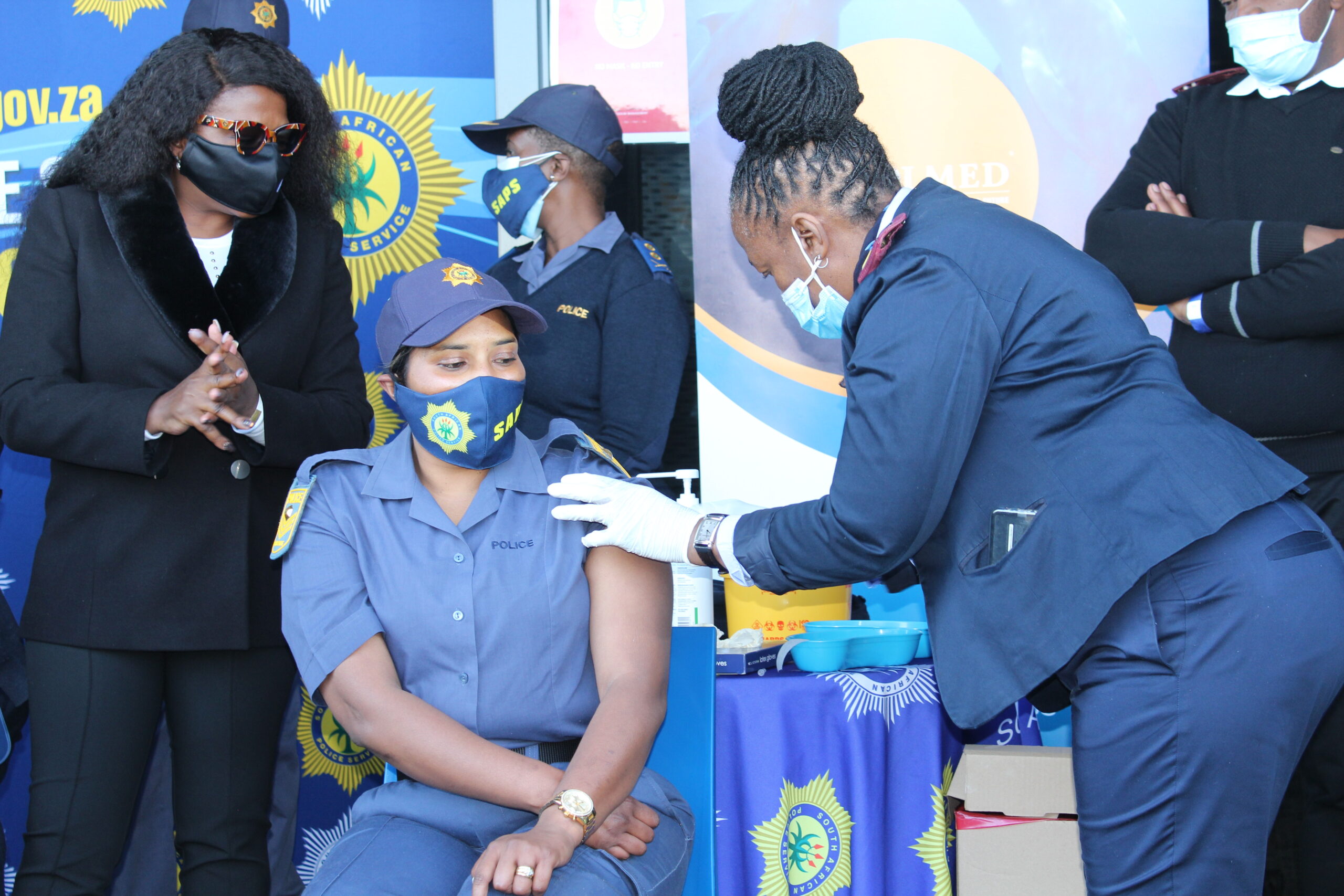 Police minister Bheki Cele put his best foot forward as the COVID-19 vaccination rollout for the South African Police Service (SAPS) kicked off yesterday morning with the safety of all 180 000 members topping his list.

Cele was joined by acting health minister, Mmamoloko Kubayi-Ngubane, and Khehla Sithole, the National Police Commisioner, at the Orlando Stadium in Soweto.

First up were Cele and Sithole who formed part of the first group of police officers and SAPS personnel to receive their single Johnson & Johnson (J&J) shot. The SAPS plans to vaccinate all its employees at 108 registered vaccination sites across the country.

This forms as part of government’s national vaccination programme targeting frontline workers in the security cluster and occupational health workplace services, as well as the general population which is now at the 50 years and plus stage.

“Today, we will be injecting 900 of us, starting with the commissioner and myself. We believe that this will help the SAPS family who will be able to work fully-protected while they protect others,” said Cele. 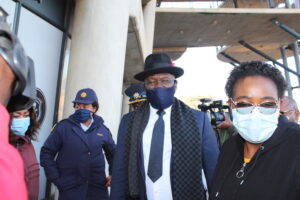 Since the start of the pandemic in March last year, over 30 000 SAPS members contracted COVID-19, 680 of them sadly losing their lives to the virus countrywide.

The police minister, like so many others, wished how the vaccines had arrived earlier.

“We wish it could’ve been earlier so that we didn’t have to lose those members. Thankfully, of the 32 500 who were infected, at least 30 000 of them have fully recovered,” he added.

Sithole encouraged all members of the police force to get vaccinated and emphasised that the vaccine rollout shows how government invests in their health.

“We know that we cannot fight crime without a healthy workforce and today – receiving the vaccination – is a demonstration of this delivery act to show members of the SAPS that we invest in their health and we want to make sure that as they go out there and that they are safe,” said Sithole.

Members over the moon to receive jab

Sergeant Natasha Govender and Constable Tebogo Rafapa were the first two SAPS members to get vaccinated.

Govender expressed her excitement after receiving her jab and urged all members to follow suit.

“I just received the vaccine and I feel fine. I’m so excited and I urge all my fellow colleagues to do the same,” said Govender

She continued: “I really wanted to get vaccinated because so many of our members have either lost their lives or been infected so I couldn’t wait for today.”

Rafapa explained the debilitating effect the pandemic had on their team.

“It’s been a struggle to arrive at work and to find out that that one of your colleagues has been hospitalised. It’s kind of demoralising but you have to pick yourself up and get to work,” said Rafapa, who also expressed his gratitude towards his employers for providing the necessary personal protective equipment (PPE).

He underlined the value of being protected when reporting for duty.

“It’s going to make a big difference. We encounter so many people on a daily basis, unaware of their status. It’s a nice bonus to be protected so therefore I’m encouraging my colleagues to get vaccinated,” he concluded.

Cele remained hopeful that the vaccination programme would be wrapped up in the shortest time possible. 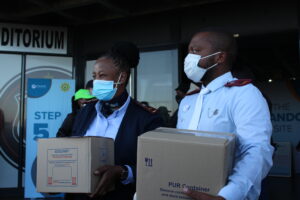 The provincial government announced its plans of expanding the rollout with a COVID-19 mobile vaccine drive set to be launched the week with the aim of vaccination as many people over the age of 50 as possible. Carried out with the aid of civil society partners, the drive will kick off in Ekurhuleni, Tshwane and Johannesburg.

Hesitancy among educators a real concern

This follows teachers and education sector workers who started receiving their single J&J shots late last month. But the rollout programme has encountered plenty of obstacles including hesitancy among teachers.

“We are very worried that nearly 10 000 of our personnel in the Gauteng education sector are for one reason or the other, refusing to be vaccinated against this deadly virus which has wreaked havoc in our schools and communities by taking our loved ones away,” he said.

To date, more than 33 000 educators and support staff have received their J&J jab and more than 2.5 million vaccinations have been administered using either the J&J vaccine or the double Pfizer shot out of a population of almost 60 million. – Health-e News