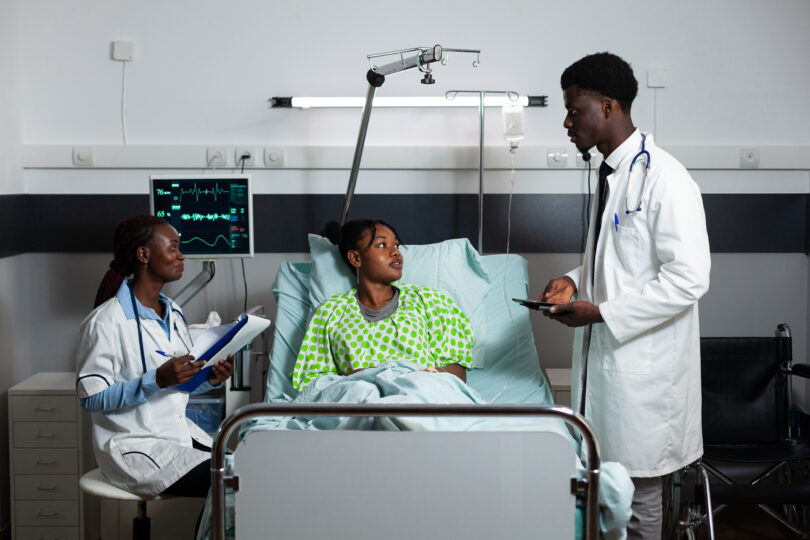 The NCD Alliance report reveals that lower and middle income countries (LMICs) are lagging behind when it comes NCD services provision. (Photo: Freepik)

The COVID-19 pandemic and the rising prevalence of noncommunicable diseases (NCDs) have exposed the underlying weaknesses in public healthcare systems, which could threaten the gains made against diseases such as HIV, malaria and tuberculosis in poorer countries, according to a new report by the NCD Alliance.

The global health gains made against diseases such as HIV, malaria, tuberculosis (TB), as well as maternal, neonatal and childhood illnesses, in many low-and-middle income countries (LMICs) are under threat. This is not only from the direct impact of Covid-19, but also from the rising prevalence of noncommunicable diseases (NCDs) and the underlying weaknesses in public healthcare systems exposed by the pandemic.

This is according to a study compiled by The George Institute for Global Health and released by the NCD Alliance, titled From siloes to synergies: Integrating noncommunicable disease prevention and care into global health initiatives and universal health coverage.

The report argues that decades-long political commitments to integrate NCD services with services for priority groups for major global health initiatives such as HIV, TB, malaria and maternal and child health have not translated into reality on the ground in LMICs.

Healthcare in many LMICs does not yet respond to the needs of people living with NCDs, which have come to be the leading causes of death and disability worldwide.

According to the Lancet NCDI Poverty Commission, one in three diseases among the poorest billion people in the world are NCDs, with half affecting children and young adults.

Speaking on Thursday during the release of the study, NCD Alliance CEO Katie Dain said there is an urgent need to reset healthcare service delivery in poorer countries.

“We urgently need a reset of healthcare delivery in poorer countries that actually reflects the needs of those who need it most. Integrated care is the future of healthcare. The reality today is that ever more people are living with multiple chronic conditions,” said Dain.

“This needs to be better recognised in health systems. People living with HIV have a significantly higher risk of cardiovascular disease and some cancers. People living with TB are much more susceptible to diabetes and vice-versa.  Hypertensive disorders and gestational diabetes affect many pregnancies, risking potential lifelong health impacts for both mother and child if not effectively treated.”

NCDs cause nearly 3 out of 4 deaths worldwide, many of which are preventable.
To find out the ways you can #ActOnNCDs, visit our websitehttps://t.co/Es29oOYLkV. pic.twitter.com/TohMpKS2yq

Dain added: “Health centres that reflect this changing epidemiology are the future. But this will also mean that we must change the way we do business. The COVID-19 pandemic has been catastrophic for people living with NCDs and it is clear we need a health infrastructure in LMICs that is fit for purpose if we are to build back better.”

The study stated that NCD services provision is woefully inadequate in most LMICs, with many countries far behind on progress towards universal health coverage (UHC) as a result of poor performance in NICDs, compared to their performances in communicable diseases and reproductive, maternal and child health.

The study also stated that Covid-19 has brought about a greater recognition that the long-held distinctions between communicable and noncommunicable diseases are not as clear cut as once thought. Those with chronic conditions prove significantly susceptible to severe illness and death, following infection with the virus.

“Health systems too need to adapt to a clearer focus on the person and their state of health through the life course, not only the single health crisis or condition that leads them to seek care at a particular moment. And the disease burden in LMICs has also been changing, with noncommunicable disease and injuries coming to the fore as leading causes of death and disability worldwide,” says the study.

“The cohort of people affected by NCDs includes in some cases fairly significant proportions of people living with HIV, and other priority population groups that are the targets of current global health initiatives.”

“Globally, as many as one in four people living with HIV are estimated to have moderate to severe depression, and one in five have one or more modifiable risk factor for developing cardiovascular disease. Global estimates of type 2 diabetes prevalence amongst people living with HIV range from 1.3% to 18%, depending on the setting, with little robust population-wide data available from LMICs.”

According to Dr Gill Schierhout, from the George Institute for Global Health, many LMIC health systems continue to be influenced by global health funding, which has a critical impact on the healthcare available.

“The funding to low- and middle-income countries for priority population health initiatives, such as HIV, malaria, TB and maternal and child health has been pivotal in achieving substantial health gains over the past decade. Many LMIC health systems continue to be influenced by global health funding and the shape of this has critical impacts on the healthcare available – or not available – for the growing number of people who are living with NCDs in LMICs,” said Schierhout.

The study also found that integrating NCD services into established, specifically funded programmes as add-ons or “service bundling” can provide essential priority health interventions to key groups and communities during the transition to UHC.

“Such efforts can be a stepping stone, helping to build relationships and trust between people working in different disease areas, who need to collaborate if the journey to UHC is to progress. Before Covid-19, many global health funds were already adopting UHC principles and – to varying degrees – including efforts to strengthen health systems in their funding models. This process now needs to accelerate,” the study states.