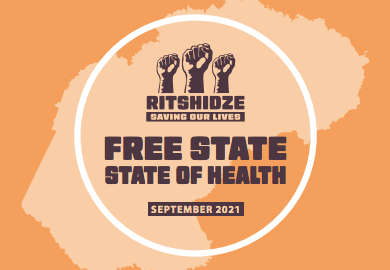 The moment of truth has arrived for the Free State Department of Health following the release of the Ritshidze report – detailing all its shortcomings – which was presented at a community accountability meeting in the Batho location on Thursday.

Some of the challenges faced by the department include long waiting times, staff shortages, the poor condition of infrastructure, medicine stockouts and violation of patients’ privacy.

The report titled ‘Free State – State of Health (September 2021)’, is based on the results of data collected through Ritshidze’s community-led monitoring.

Staff shortages remain critical in Free State public health facilities which undermines the quality of healthcare services provided to patients. Ritshidze found that only 21% of the facility manager interviewed, reported that they have enough clinical and non-clinical staff to meet the needs of patients.

“Ensuring access to quality healthcare services and ensuring everyone living with HIV and TB has access to medicines and care depends mainly on having enough qualified and committed staff. And these shortages lead to long waiting times,” said the report.

“What is clear, is that both facility managers and patients agree: there is a major gap between the staffing needed to ensure high quality services and the staff present each day in the clinics in much of the province.”

While COVID-19 persists in South Africa, the pandemic has worsened the provision of healthcare service in the province, which has resulted in fewer people getting tested for HIV, screened for TB and an overall decline in the number of visits to healthcare facilities compared to previous years.

Compiled between April and June this year by Ritshidze – a community-led monitoring system developed by civil organisations representing people who are living with HIV – states that fewer HIV tests are being carried out in the Free State.  A decline in the number of GeneXpert tests for TB, which was also found to be the case, will lead to an increase in the number of people with undiagnosed TB and these patients will continue to spread the airborne disease in their communities.

According to the World Health Organisation (WHO), the COVID-19 pandemic should not jeopardize the hard-won gains made in the global response to HIV.

“HIV continues to be a major global public health issue, having claimed 34.7 million lives so far. To reach the new proposed global 95-95-95 targets set by UNAIDS, countries need to redouble efforts to avoid increasing HIV infections due to HIV service disruptions during COVID-19, thereby slowing down the public health response to HIV,” stated WHO.

Despite the decline in the number of patients visiting public healthcare facilities, the report indicates that long waiting times for patients waiting to be assisted at facilities, remain a challenge, which poses a risk on people who are living with HIV to disengage from care.

Yet, the Free State doesn’t come anywhere close to reaching these numbers – clocking in at 91-81-89.

“The failure to make sufficient progress towards the 95-95-95 targets can be directly linked back to the crisis in our clinics in the province and the poor-quality public healthcare services, shortages of staff that lead to poor quality of care and long waiting times, slow progress towards extending ARVs refills and ensuring more people living with HIV collect treatment outside of standard facility dispensing exacerbates the burden on clinics as well as people living with HIV,” stated the report.

Patients often have to face unfriendly faces; adding to their woes. The report revealed that the poor treatment of patients and bad attitudes on the part of healthcare workers, coupled with an unwelcoming environment, is common in most public healthcare facilities in the Free State.

Mary Nyathi, a Ritshidze Project Officer, shared some of the unpleasant experiences.

“Some patients told us how they feel judged by nurses, are dealt with rudely and most tragically, often don’t get the medical care they need. Only 44% of patients interviewed thought that clinic staff were always friendly and professional,” said Nyathi.

She added: “People living with HIV at 15 of the 22 sites monitored, complained of being shouted at if they missed an appointment. Some understanding, some humanity and some basic professionalism are what Free State clinic users are crying out for in this province.”

A sex worker interviewed at the Bloemspruit clinic earlier this year, prefers to keep her identity to herself in fear of being judged.

“For me they don’t know I am a sex worker. I don’t want them to know because the treatment will be bad for me. They are not treating other sex workers well, for example, they are shouted at if they take many condoms. It’s embarrassing to be shouted at for taking more condoms, so I know better to never reveal that I am a sex worker. Again, there is no STI screening or treatment done and if you are pregnant, there is no termination of pregnancy available,” she said.

The report also mentions ongoing complaints regarding stockouts and the shortages of medicines and medical tools.

Ritshidze monitoring takes place on quarterly basis at 400 clinics and community healthcare centers across 27 districts in 8 provinces in South Africa, which include 22 facilities across the Free State. With 12 facilities in Lejweleputswa, 8 facilities in Thabo Mofutsanyane, and 2 facilities in Managing. – Health-e News