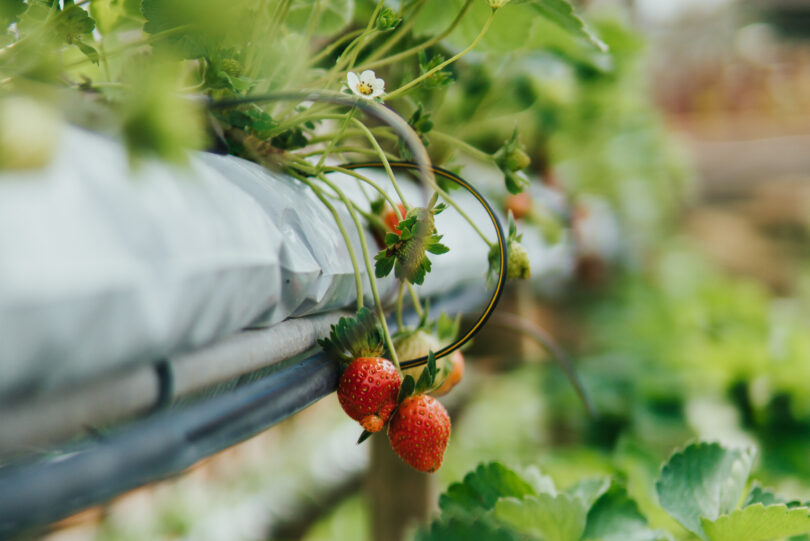 The waterwise and environmentally-friendly aquaponics farming method used at FinLeaf Farm maximises productivity on a small two-hectare piece of land and could be the answer to achieving food security and sustainable agriculture.

Integrated Aquaculture Group, which specialises in operating and building environmentally-conscious aquaponics solutions, has come up with innovative ways to achieve food security, improve nutrition and promote sustainable agriculture, while sharing skills with aspirant farmers who see this way of farming as the future.

Occupying only two hectares of land in Hekpoort, at the border of Gauteng and the North West provinces, the FinLeaf Farm uses a technically advanced method of farming that combines the cultivation of green plants in nutrient-rich water where fish species are bred.

Founder and owner of the farm, Lance Quiding, is a first-generation farmer, who started farming in 2010. He spoke to Health-e News about his journey into aquaponics.

“Aquaponics is a combination of aquaculture on the one hand and hydroponics on the other, and coming together it’s called aquaponics. The fish waste from the aquaculture is used as a primary input into the hydroponics,” said Quiding.

Combination of aquaculture and hydroponics

He explained the benefits and the technical system involved in the process of the combination of aquaculture and hydroponics. “There are many benefits, the most obvious is that it is intensive and we do not require fertile soil, so it almost takes the land question away, because we can farm on any land that we are given. We can put it anywhere we want, so it’s close to a market,” he said.

“The other benefit is the waterwise usage of water. We do not use a lot of water. Even though you see a lot of water on the surface, the fish are growing in water and that water extracts the waste and goes into the mineralisation process and from here it goes into the vegetables, so it is a decoupled closed multiloop system. The water that we extract from the ground gets used more than once, and we only use that water through trans-evaporation through the leaves of the vegetables and evaporation.”

According to Quiding, the other benefit is that farm employed all types of people, from the young to the elderly, as it does not require heavy equipment. The technology used on the farm also makes it possible to attract the talents of young people who are both qualified and tech-savvy.

Gugulethu Mahlangu is an aquaponics horticulturist at the farm and said that after having been a leaseholder of a conventional farm in Boksburg, working at a farm that uses technology was an exciting opportunity for her.

“This was a wonderful opportunity for me, because this is one of the biggest commercial farms in Southern Africa, so I grabbed this opportunity with both hands. Because it’s smart farming, it’s not something that I’m used to, so it’s a perfect opportunity for a young woman like myself to learn about technology in farming,” said Mahlangu.

According to her, this method of farming could help reduce the global carbon footprint, which is something she feels people should aspire to.

“We need to reduce our carbon footprint in this country. Let’s look at new ways to grow food, especially as we are not readily exposed to such different ways of farming. This type of technology can be scalable and replicated anywhere in the country and the continent,” she said.

Raised by his father, who was a farmer who struggled to remain sustainable, Surprise Makhura decided he would study agriculture at university to learn how to be a successful farmer. Makhura specialised in hydroponics, but his passion changed when he was introduced to aquaculture.

Climate change, which is a threat to food security, and escalating food prices are some of the factors that Makhura thinks should encourage young people to get involved in agriculture. Especially as there are now advanced and effective ways for aspirant farmers to contribute to ensuring that South Africans can afford nutritious food.

However, starting a farm with aquaponics technology does hold challenges for the first-time farmer.

“Becoming a first-generation farmer is extremely expensive because you start with nothing and you need to either build it, or you need to buy a property that already has infrastructure on it – there is no shortcut to having infrastructure. In agriculture, whether it’s buying land or a tractor, or in aquaponics, whether it’s securing a small piece of land and then putting in infrastructure, there are costs attached.

“This one of the main barriers to entry into the aquaponics space is finding entities that are willing to take the risk on a primary agricultural starting point rather than agro-processing,” said Quiding.  – Health-e News