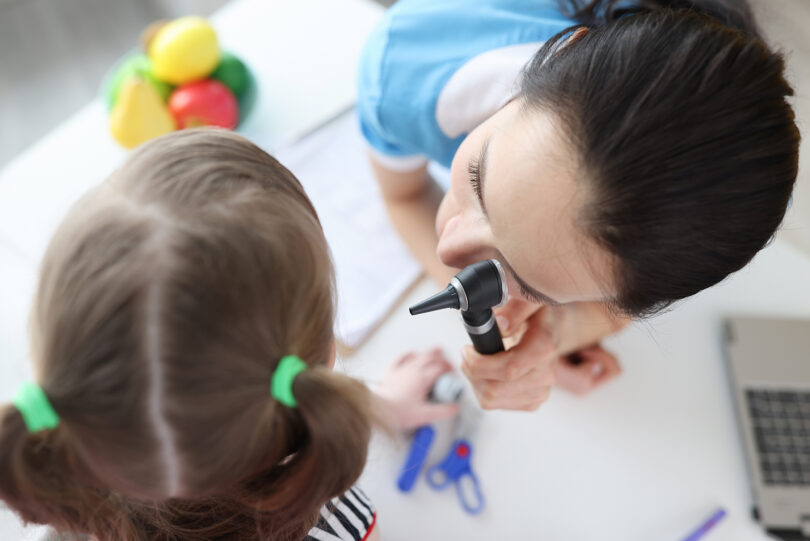 The only time a parent might notice that something is wrong is when a child is not talking past a comfortable delayed stage, normally at the age of three. (Photo: Freepik)

Universal newborn hearing screening is not mandatory in South Africa, meaning that many children face educational and developmental challenges due to undiagnosed deafness or hearing impairment. A mother shares her journey with Health-e News. By Kalay Nair.

Hearing impairment: Kids often have to suffer in silence

The right to education might be enshrined within the country’s Constitution, yet it is a right that is not fully realised for most children with hearing impairment in South Africa.

Sadly, the prospect of a good education is often lost long before a child has even set foot in the classroom. According to a report by Stats SA in 2012, hearing impairment is the third-highest reported disability in South Africa, but identifying that a child has a hearing problem is not as easy as it sounds.

The lack of universal newborn hearing screening (UNHS) in South Africa is the first challenge faced by children. It results in a late diagnosis of deafness or hearing impairment. There is currently no legislation in South Africa making UNHS mandatory, so it is not standard practice. Instead, the country follows the targeted screening.

International guidelines suggest that screening for hearing loss is done at one month old at the latest and that an early intervention plan be implemented at no later than six months. In South Africa, this can happen any time after age two.

“Deafness is the last thing you see when you have your baby. It’s got 10 fingers, 10 toes, and you don’t think about its hearing,” said Dr Belinda Birdsey, who has three hearing-impaired children.

A personal journey to learn about hearing impairment

Birdsey has a master’s degree in neurodevelopment but is also the mother of three hearing-impaired children. Her personal experience led to her founding the Thrive Parent Support Group for families of deaf or hearing impaired children.

“The only time a parent then has it on the radar that something’s up and you might not realise it’s deafness is when the child is not talking past a comfortable delayed stage. And that typically happens between the ages of two and three years old.

This was also Birdsey’s personal experience. Her twins, Hadassah and Tahlita, were diagnosed when they were three years old.

“They were about two and a half when I started getting worried. And everybody kept telling me that I was being paranoid. But our closest friends had their first child, literally a week apart from our twins. I couldn’t get over the difference between what my kids were able to do verbally and what their child was doing.”

She discussed her concerns with an audiologist, who told her that all the twins needed was some speech therapy. But that didn’t help.

At the end of a visit to Johannesburg, when they were about to turn three, the problem became clear.

‘I realised she was deaf’

“We were paying for our accommodation. And I could hear the one crying. She had tried to follow me and got lost somewhere in the garden. I could see where she was. So I went outside and shouted her name, and she didn’t turn. I thought, well, she’s screaming so loudly, she can’t hear me. So I went right behind her. I shouted her name with every ounce of possible strength that I had. She didn’t turn. I touched her shoulder, and she turned around and was so happy to find me. At that moment, I realised she was deaf.”

The children were formally tested, and their hearing impairment was confirmed.

“It had just taken such a long time to figure out. Everybody in our space, including professionals, just didn’t see it… wouldn’t think to even think of it.”

So began the family’s journey to ensure the girls received the best chance possible for a good education. Birdsey and her husband resigned from their jobs to move the family to an urban area.

“We rented a place we’d never seen, and we just made these huge decisions to get closer to the city so we could get help.”

Noticing the signs of hearing impairment

Within months, she noticed that her youngest child, Eden, also displayed hearing impairment.

“I remember going to the audiologist, and I told them I needed to do a hearing test with the little one. They said I’m paranoid because I know what’s happened, so I’m feeling on edge about everything.”

Birdsey said she knew something was wrong because she noticed that her daughter did not always listen and that she was only saying a few words. She insisted the audiologist test her.

“They tested her and said to me that everything’s fine. But I could tell they were having trouble with the machine.”

Two days later, she was tested at another audiologist, and her fears were confirmed. “It was a hectic four months of discovering that all three of our kids were deaf.”

The family moved swiftly to make up for the lost time to get the children on track to be able to communicate.

“We got them all hearing aids and started talking with them. But that’s a very long process. Putting hearing aids on doesn’t mean you have to start talking tomorrow. And I just wasn’t wasting another day, especially with my older twins. So, I also learned some sign language and put them in a school for the deaf so I could be immersed in that culture and language.”

“Three weeks after learning sign language with them, we went to the shops, and it started raining. One started freaking out. I had put all three kids in the trolley, and I needed to get to the shop, so I used the few signs I knew. I asked, ‘what?’ She looked at me because she knew ‘what’ because we had been learning together.

“She said, ‘shoes wet”. I took them off, and we carried on shopping. At that moment, I realised how priceless that was, being able to communicate with your kid.”

The World Health Organisation says about 60% of hearing loss in children under 15 years of age is preventable. Making quality education available to deaf and hearing-impaired children begins with them being identified early so they can receive appropriate treatment and support. – Health-e News