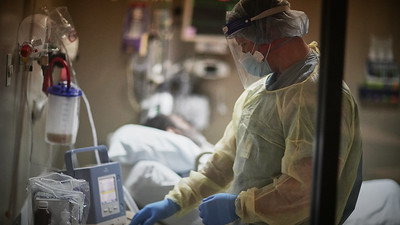 Government is working at preparing for the 4th wave of COVID-19:Credit(Flickr/US-NAVY))

National government is working closely with the provinces to ensure the country is prepared for the expected fourth wave of COVID-19.

Briefing media on Friday, Health Minister Joe Phaahla said priority is being given to ensuring there is adequate oxygen supply, ventilators, beds and PPE available. When the third wave hit South Africa in June hospitals ran out of beds and oxygen.

“AFROX has made contingency plans to ensure that we have enough oxygen when the fourth wave comes.”

Phaahla said staffing is an issue as the additional healthcare workers employed to respond to the pandemic are on short term contracts.

“We are in talks with the treasury to make more funds available to ensure we have required staff.”

While the rate of new infections has slowed over the last four weeks, Phaala said a resurgence was imminent. The health minister said this resurgence would occur sometime between mid December and mid January.

“The fourth wave will be driven by movement by people and also driven by new variants. At the current moment the scientific team monitoring this has not yet found a variant of concern. The movement of people is inevitable which makes it more urgent for people to come forward to get vaccinated.”

Election did not cause a spike in infections

Phaahla said the local government elections held on November 1 did not cause a spike in COVID-19 infections as was feared.

“We are pleased to report that indications thus far, 11 days after elections we have not experienced any super spreader events. This is after the election or the campaigns. Thus far not a single province or district has shown a spike in infection.”

He added that 70,000 people were vaccinated on election day as part of the partnership with the IEC where vaccination sites were set up near voting stations.

Professor Linda-Gail Bekker said the only way to protect the country against the fourth wave is to get as many people as possible vaccinated.

”Our main focus needs to be to ensure that people get their prime dose of vaccine, especially those over 60s, we have to get those numbers up,” she said.

“We can do this by the end of December. Some analysts have been critical but we can say we are working on it. By 15 November 40 percent of South Africans will be vaccinated.”