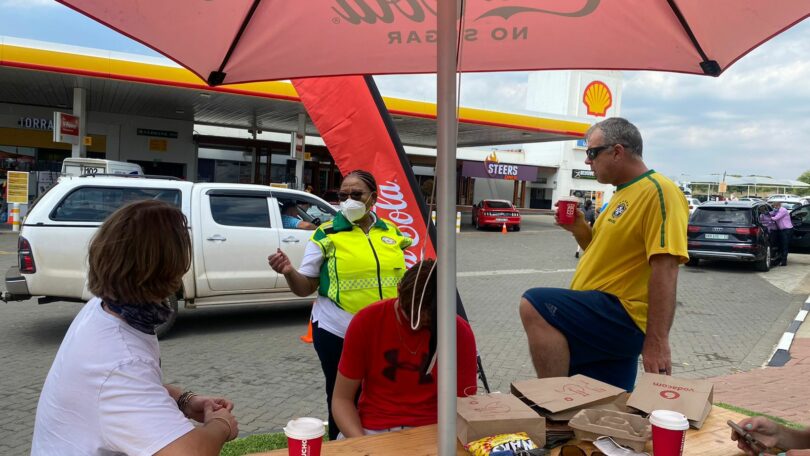 Free State MEC for Health, Montsheng Tsiu, chats to holidaymakers at one of the four COVID-19 vaccination stations.

Mbalula launched the holiday road safety campaign this week using the hashtag #LiveBeyondDezemba as thousands prepare to leave on holiday.

Drivers on the N8, N1, N3, N5, and N6 queued to get jabbed next to the roads where security clusters have gathered to ensure road safety.

Tsiu, a professional nurse, administered a few shots to travellers and urged others to get vaccinated. She said the province is trying to play a role in helping the country read population immunity.

“We have set ourselves a target of vaccinating at least 80% of the population. These stations will not only help our own province but others as well. We hope to vaccinate between 20 000 and 50 000 travellers using Free State roads.

Tsiu said she is worried as the fourth wave, triggered by the Omicron variant, spreads.

“We are experiencing an increase of infections and our health workers have been hit hard. We are appealing to those who haven’t been vaxxed as well as those who require booster shots.”

The N8 connects Groblershoop (south-east of Upington) with Maseru in Lesotho via Kimberley and Bloemfontein.  Annually, about 100 000 holidaymakers pass Bloemfontein using the road ahead of the festive season.

Holidaymakers welcomed the move to have these stations placed along major routes.

Marius Ebenholzer, travelling to the Eastern Cape from Tshwane, received a jab together with his family.

He commended the professionalism of the workers. “We realised that by postponing it, we were only placing ourselves in danger. We have eventually overcome our fears,” he said.

Truck driver, Moses Dlamini, also got vaccinated. “My company gave us a deadline of 1 February 2022, so I’m happy to have done it.”

Charmaine Moore, who is planning to study medicine at the University of Stellenbosch, said exams had taken up a lot of her time.

“All universities are amending policies to have all staff and students vaccinated.  Now, I can enter the premises and attend lectures without too much fuss. I hope other young people do the same,” said Moore.

Public and private emergency services were able to, once more, launch a road safety campaign after COVID-19 hampered the initiative in 2020.

Marketing and Communications Manager at Life Healthcare, Hannika Struwig, said the safety of all travellers was their No 1 priority.

“This event creates the opportunity to bring the private and public emergency services, the Departments of Roads and Health and Safety, together to ensure everyone is safe while travelling on Free State roads,” said Struwig.

Choose to travel during the day, it is safer.

– It is easier to see cars in low light situations – especially oncoming vehicles.

– it is easier to spot cars in the glare, shade, dusk when the vehicles drive with their lights on.#LiveBeyondDezemba pic.twitter.com/cjWQirSiQM

Mbalula said the vaccination stations would double up as a resting place for drivers needing a break during long journeys. – Health-e News