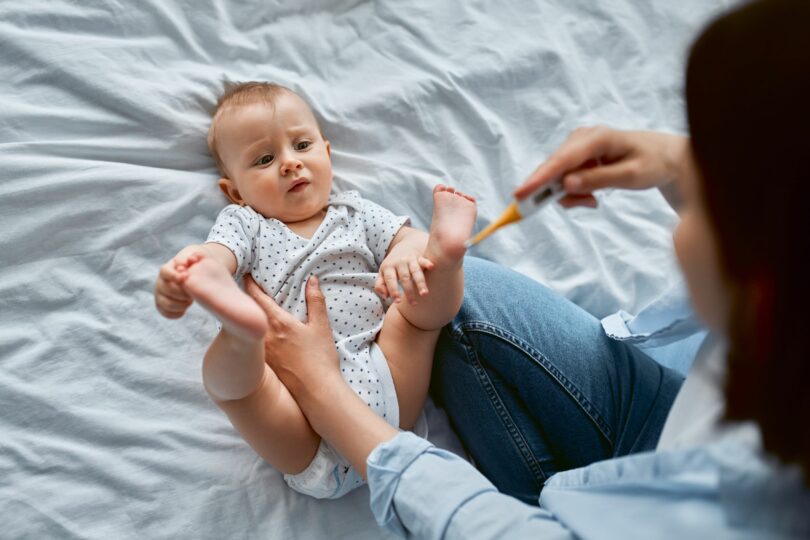 Baby Karien is only seven months old and desperately needs a life-saving blood stem cell transplant from a matching donor. Her parents are appealing to South Africans to consider becoming stem cell donors to help their daughter and others.

Karien was diagnosed with SCID (Severe Combined Immuno-Deficiency) also known as “bubble baby syndrome”. SCID is a group of rare disorders caused by mutations in different genes involved in the development and function of infection-fighting immune cells. This means, Karien, essentially doesn’t have any immunity.

Parents determined to find a donor

Baby Karien was conclusively diagnosed with SCID after a range of extensive and invasive diagnostic tests spanning two months from mid-October. But despite the news of the dire diagnosis, her parents had a measure of relief of finally knowing the definitive cause behind their daughter’s spate of illnesses and began discussing the treatment plans going forward. Karien needs a stem cell donor in order to overcome the dreaded condition.

We are excited to let you know that we received 4400 swab kit requests following Karien's patient appeal! 💌

Our couriers will be in contact with everyone who is waiting for their swab kits.

Before her sudden onset of symptoms, the infant was a happy, healthy baby who fed well and slept through the night. Her mother, Natasja Swanepoel, said Karien was an easy-going baby who was full of strength and character. She also had extraordinary perceptive skills for her age.

“Karien is such a special little girl who has touched the lives of so many people. Finding a donor match for her will be an incredible blessing. But, if someone else finds their match through this process then it will be even more meaningful. Please register today,” pleaded Swanepoel.

Baby Karien is currently being treated at Cintocare Pretoria and has three dedicated specialists attending to her. Due to her almost non-existent immune system, she is kept in isolation in the high or intensive care unit. The little girl has battled several critical conditions like mastocytosis, double pneumonia and polio to name a few. She is fed through a tube and relies on a ventilator at times. Her mom and dad take turns in staying her side 24/7.

Swanepoel said her family like to keep their affairs private but they’ve had to turn to the public to encourage qualifying blood stem cell donors to sign up for the registry and donor center – DKMS Africa.

Every year, thousands of people across the globe are diagnosed with both malignant and non-malignant disorders of the blood and immune system, as well as metabolic diseases. Many of these cases reach a stage where a stem cell transplantation is their only hope of survival.

DKMS Africa’s Country Executive Eirector, Alana James, said that anyone aged between 18-55 and in good health, can become a stem cell donor.

“DKMS Africa covers the cost of the DNA test required to register as a donor, so there are no costs. There is also no cost to donate stem cells when you are identified as a match for a patient. If you are aged 18-55 and are in general good health, you can register as a stem cell donor. It’s simple and easy and has the potential to change the lives of patients,” said James.

James said that once matched, the donor will receive injections to stimulate release of their blood stem cells which are present in the bone marrow, into the bloodstream.

“For the actual donation, a needle is placed into one’s arm and the donor’s blood is circulated through an apheresis machine. This machine acts as a filter to remove the blood stem cells and then the remaining blood is returned through a venous line in the other arm. The whole process takes approximately 4-6 hours, and you can return to work within one or two days,” said James.

“The chances of having a fully matched sibling donor are only 25% for every patient. Although patients of European ancestry are likely to increase the likelihood of finding a match, 80% and upwards, this is not the case for patients of African or mixed-race ancestry. For the latter, donors are found in less than 20% of cases.”

James said it has become much easier to match donors and patients through a more sophisticated typing of the Human Leukocyte Antigen (HLA) region in the DNA.

“The sample for this complex testing is in the form of a simple cheek swab from both the patient and the potential donor. This is much more complex than matching blood groups. Following the Sunflower Fund’s merger with DKMS, the organization now has access to the DKMS Life Science Lab which became the world’s first HLA typing Lab in 2013. The lab utilizes breakthrough Next-Generation Sequencing technology which has resulted in over 1 million potential stem cell donors currently typed per year. We are now able to provide the most efficient and detailed donor selection process,” said James.

However, she points out that the odds of being a match are about 1: 100 000 which is why the organization needs as many donors as possible.

“Reasons for this discrepancy are the significant genetic diversity that exists in African populations compounded by the lack of African and mixed-race donors on registries. People living with blood diseases in South Africa are thus at a distinct disadvantage. This is why we need to recruit local donors so we can save more lives,” said James.

Explaining why people may be reluctant to become a donor, James noted: “They believe that the process of harvesting stem cells directly from bone marrow is most commonly practiced. Again, innovation in the medical and technological spheres have allowed this process to become streamlined and relatively pain-free. Stem cells are harvested from one’s blood 90% of the time.”

James encouraged South Africans to save the life of young Karien by becoming stem cell donors.

“Baby Karien deserves a second chance at life. At only seven months old, she should be playing with her toys. Instead, she has a life-threatening illness. We urge all people, who are eligible to register, to do so using our online registration platform,” said James.

DKMS Africa, formerly known as The Sunflower Fund, has registered over 11 million donors worldwide. To register as a donor is a quick and simple process that involves a non-invasive mouth and cheek swab. – Health-e News