Home » Ritshidize report: Key populations left out in the cold 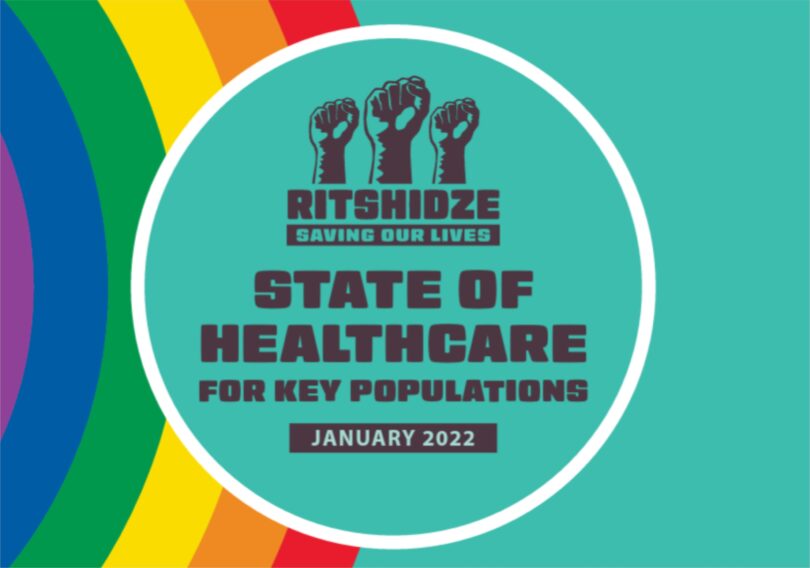 The report found that key populations fear for their safety when seeking medical services within public health facilities. (Photo: Ritshidize)

Ritshidize report: Key populations left out in the cold

A new Ritshidize report has opened up yet another can of worms and this time it’s key populations who have been abandoned by the public healthcare system.

The reported titled ‘State of Healthcare for Key Populations’ , which took 18 regions into account, was launched yesterday.

Key populations (KPs) include men who have sex with men (MSM), people who use drugs (PUWD), sex workers and trans*people. The report found that these KPs aren’t able to receive medical services, face poor staff attitudes and a lack of privacy, aren’t safe and struggle to access condoms and lubricants.

Only 42% of respondents reported that staff are always friendly and professional towards MSM, PUWD and sex workers and 46% towards trans* people.

KPs are also often questioned when requesting basic prevention tools. Less than 30% are able to access lube at facilities.

Out of their reach

“Most key populations used a public health facility to access their health services rather than drop-in centers, mobile clinics or private doctors. In fact, many KPs we spoke to are not even aware of drop-in centers, including 87% of MSM, 81% of PUWD, 74 % of sex workers and 83% of trans* people. Those who are not aware of them often live too far away and cannot afford ransport,” said Rambau.

Rambau further stated that key populations continue to be treated badly and often fear for their safety when visiting public health facilities.

“It is critical to ensure a friendly, safe and confidential environment for all key populations with services that cater for their specific needs. If they don’t feel safe or respected, they won’t return to collect antiretrovirals (ARVs) or HIV treatment,” he said.

“We cannot abandon KPs who are not able to get to a drop-in centre. These issues must be addressed to ensure that all KPs are able to access healthcare services and are not left behind in the prevention of HIV and reaching the UNAIDS 95-95-95 targets.”

‘I have stopped seeking treatment’

Sabelo Zulu* from KwaZulu-Natal, who has sex with other men, said that he has stopped seeking medical services from public health facilities due to ill treatment.

“Being gay and HIV positive is so challenging to many guys, especially when it comes to receiving help. Thank God now I’ve got a job which covers medical aid and allows me to seek medical attention at any private hospital I want,” said Zulu*.

Zulu described how he was once humiliated at a local clinic when he had piles He was told his sickness was caused by having unprotected sex with other men.

“I was in so much pain that I couldn’t walk. Other patients who know that I’m gay, were also gossiping about me. The worst part was when the nurse said to me ‘it’s because you gays don’t want to use condoms’. I don’t know why she came to that conclusion,” said Zulu*.

The Ritshidze report also stated that KPs are the most affected by HIV, and yet ironically, have the worst access to HIV services. Sex workers have been told to put condoms back and PrEP isn’t always offered to those in need. Many people wanted to stop using drugs, yet methadone programmes are inaccessible to them and needle exchange programmes are in extremely limited supply. Trans* people explained the difficulties of having to travel all the way to major cities to access hormone therapy and gender-affirming services.

“Many KPs told us they had been refused access to services at the clinic for being a KP. This is a complete violation of the Constitutional right to access health services. People using drugs reported being turned away for being ‘too dirty’. Some spoke of clinic staff who shout out warnings to other patients to protect their belongings when they arrive in the queue,” read the report.

“Several times I was refused proper health care at this clinic. Last year, I took my child to the clinic because she was coughing. A nurse  asked why didn’t I take the child to a private doctor since I’m a rich woman who opens her legs for men for payment. The other day I almost beat up a nurse who accused me of having sex with her husband,” said the 36-year-old.

“But there are some few female nurses who treat me well despite knowing what I do for a living. They even advise me to use condoms and reprimand me if I break the rules. Male nurses usually do not ill treat us.”

Another sex worker from the Eastern Cape said bad attitudes are common.

“Some of them are very nice, but those that know you’re a sex worker, treat you differently. I don’t receive immediate service because they claim we don’t need to rush to work,” said the Greenfields clinic patient.

Mxolisi Mdabe* from KwaDabeka in KwaZulu-Natal, suffers from tuberculosis (TB). He believes it was caused by smoking dagga and cigarettes for over 30 years. He also stopped seeking treatment after not being taken seriously.

“I started smoking dagga when I was a teenager. After ten or so years, I noticed that I was starting to cough excessively and experienced chest pain. I was eventually diagnosed with TB,” explained Mdabe*.

“I finished all my TB treatments for six months but the coughing didn’t stop. It worsens after smoking dagga. I would visit the clinic where they’d give me cough mixture and panados. After a while, they got tired of me and didn’t want to give me anything. They also told me to stop smoking. This is when I stopped seeking help from public health facilities. Now I only use traditional medicine to treat any sickness,” he said.

The Ritshidze report also recommended that any complaints must be urgently investigated by the department of health and disciplinary action taken where appropriate. It added that facility managers should be held responsible for unresolved issues.

Ritshidze is a community led monitoring system developed by organizations representing people living with HIV, including the Treatment Action Campaign (TAC), the National Association of People Living with HIV(NAPWA), Positive Women’s Network (PWN) and the South African Network of Religious Leaders Living with and Affected by HIV/AIDS (SANERELA+). -Health-e News.

*Indicate a name change to protect the identity of the source.