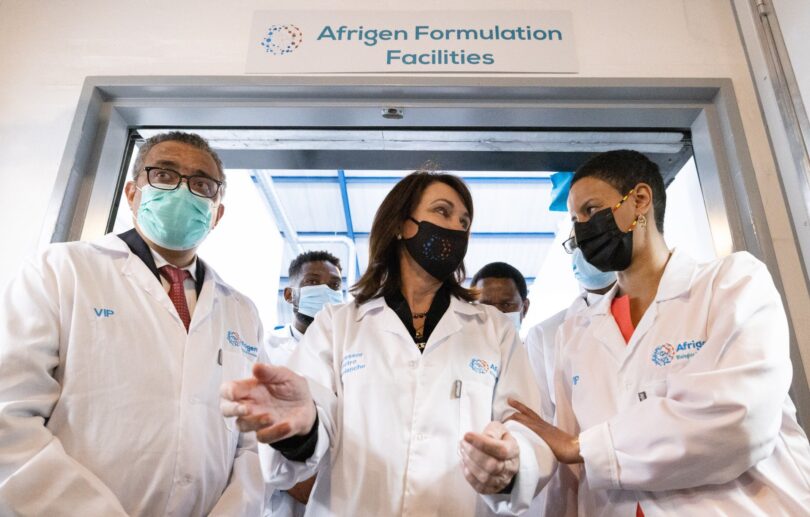 Over 84% of Africans are yet to receive a COVID-19 vaccine dose despite over half of the world’s population having been fully immunised against the virus. This disparity has left billions of people in low- and middle-income countries unprotected against severe disease and death.

Ghebreyesus, who is on a two-day visit to Cape Town, was impressed with SA’s efforts in making vaccines more accessible.

“The pandemic has highlighted the need for increased local production of vaccines globally, especially in low-and middle-income countries. The hub is a major step in that direction, by sharing technology and building on the capacity and scientific expertise that already exists in South Africa,” he said.

The WHO visit serves to showcase South Africa’s capacity and infrastructure in the development of vaccines as part of Africa’s response to the pandemic.

Thank you 🇿🇦 President @CyrilRamaphosa for your kind welcome & leadership on the #COVID19 response. #SouthAfrica’s hosting of the @WHO mRNA vaccine tech transfer hub demonstrates your commitment to ensuring sustainable local production of life-saving tools for #Africa & beyond. https://t.co/VdONMHvAbN

“There can be no doubt that vaccines have saved countless lives and are helping to turn the tide on the pandemic. That is why we are meeting in person after a long time and giving countries the confidence to relax restrictions. The scientific strides have been marred by vast inequities in access,” explained Ghebreyesus.

The hub will empower countries to not only be able to make their own vaccines but also give them a choice of which vaccine to make. Manufacturers from low- and middle-income countries will ideally receive training, technology transfer, and any necessary licenses. The WHO and their partners will bring in the production know-how, quality control, and necessary licenses to facilitate a broad and rapid technology transfer to multiple recipients.

“I must congratulate South Africa on its leadership throughout the pandemic, especially with this mRNA transfer hub. President Cyril Ramaphosa’s leadership was very clear, continentally, and globally,” said Ghebreyesus.

He added: “WHO remains committed to supporting the development of local manufacturing in Africa to increase regional health security. It forms part of our vision for the highest attainable standard of health for all people in all nations.”

Ghebreyesus said he looked forward to the hub’s further development.

“We believe that the commitment and capacity which we have in the country will make the project successful. That is why we have to work hard with all our partners that we’ll be meeting with,” said Ghebreyesus.

“The new hub is not just for South Africa. It provides a one-stop-shop for low-and middle-income countries to benefit from the technology and the know-how so they can also produce vaccines, which is critical if we are to end inequity,” said Phaahla.

He said that new variants can still emerge and South Africans can expect the fifth wave in the coming months.

Not out of the woods yet

“We are not out of the woods yet. However, we can reduce the impact by ensuring most people are vaccinated, especially the most vulnerable groups,” said Phaahla.

After meeting up with Phaahla and a number of other dignitaries yesterday, Ghebreyesus visited a few facilities including Afrigen Biologics & Vaccines and Biovac. He also met up with President Ramaphosa on Friday morning.

Ghebreyesus thanked Ramaphosa for his warm welcome and expressed his organisation’s gratitude towards SA’s contribution.

“We came to see the hub, how it’s doing and we can see that is in good hands.” – Health-e News