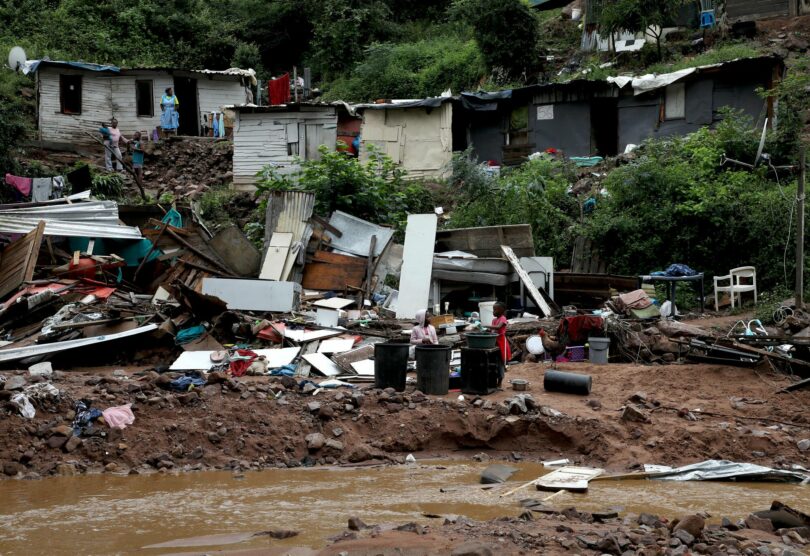 The Doctors Without Borders (MSF) team members visited several communities in KwaZulu-Natal to offer a helping hand to those who cannot access the health care services due to the challenges beyond their control. (Photo: MSF)

Almost three months after the devastating floods in KwaZulu Natal, communities are still pleading for help, stricken after losing their homes and livelihoods. The local arm of Doctors Without Borders (MSF) continues to attend to the needs of hard hit areas.

MSF team members visited some of the worst-hit areas like Greenfield, and Mariann Hill, in eThekwini. They provided much-needed health care services to those left stranded by the devastation. Many of the residents are currently accommodated in counsel flats that don’t have proper water, sanitation, and electricity.

This week's #FieldworkerFriday Nokuthula Shandu, a registered counsellor, details the work she and MSF’s psychosocial support teams have been carrying out in the wake of the devastating floods which hit KZN in April this year. Watch📹 #KZNFloods pic.twitter.com/W3NtjQHjnF

Children and elderly people were offered comprehensive health services. Dr Nondumiso Ndlovu, a medical doctor for MSF, said they were called to assist at the Greenfield shelter because of an outbreak of flu. While there, they also helped other residents with various ailments.

She said they had to refer some patients to nearby clinics due to medicine shortages.

The floods have left many survivors with psychological scars. When the weather changes and there’s a sign of rain, residents report feeling anxious and fearful of a repeat.

One of the survivors, 70-year-old granny Linah Dacosta, explained how MSF’s trauma counselling had helped her.

“I only get flashbacks when I see the weather is changing and heavy rain is on the way,” she said.

Another survivor, Kim Davis, is a single mother of four children, including a five-year-old son living with autism. She lost her house and a lifetime of memories. However, she’s thankful that her 21-year-old son, Delron, who was in the house at the time, survived.

“The house walls fell onto him, and he was rushed to hospital. She recalled that blood was coming out of his mouth, nose, ears, and eyes.

Davis said that Delron is recovering well from his life-threatening injuries after almost losing his eyesight. This causes headaches, but it’s the psychological after-effects causing him the most pain. His mother said her son still experiences nightmares and fears the worst when it rains.

“Every time it rains, he gets scared and thinks it’s happening again,” she said.

Davis said the memories of the April floods haunt them as a family. Losing their home and everything inside it has taken a massive toll on them.

MFS Trauma Counsellor, Nomsa Linda, shared some of the most common challenges flood survivors go through. Some will find it difficult to sleep and will experience flashbacks.

She further stated that they continue to assist survivors with emotional support, trauma counselling, and debriefing. They also offer them psychological intervention and psychoeducation.

As the flashbacks and memories linger, Linda mentioned the importance of support groups and the impact they can make. “Finding a local support group to share a similar experience with others can help. Here, one can exchange thoughts, feelings, and ideas on how to get through difficult times,” said Linda. – Health-e News