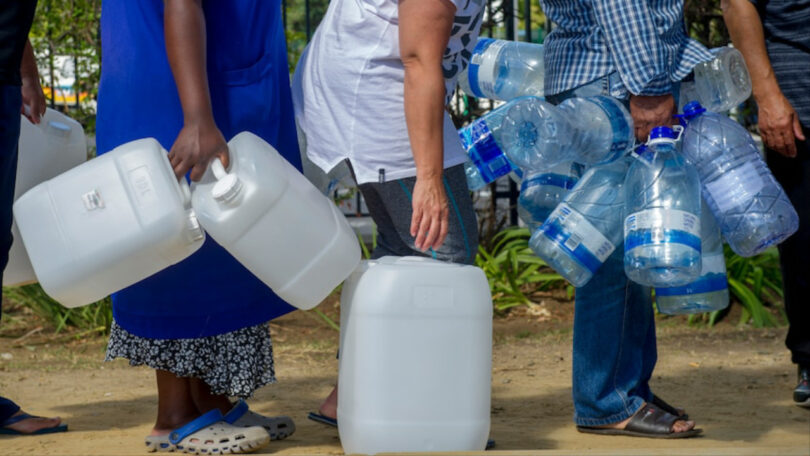 Health facilities in Potchefstroom in the North West have taken a major knock due to ongoing water cuts with load shedding pinpointed as the main cause. (Photo: Supplied)

Residents in the surrounding areas of Potchefstroom in the North West have had to live with little or no water for weeks. Load shedding has been identified as the most recent cause as water problems continue to plague the JB Marks Municipality.

Public health facilities have also been severely impacted, with some having to shut their doors. At some clinics, patients aren’t allowed to use the toilets.

It’s been a challenging year for township residents who have had to deal with intermittent water supply for most of 2022. Several issues have surfaced, including old infrastructure, water contamination, and now the theft of property and Eskom’s woes.

According to residents, the water cuts began last Monday without notice, and they had to find alternative water sources.

Enerst Sehaole, 45, from Kanana township, said the cuts had forced him to look for water at night.

“We are suffering. I have to come home with water from work because there is nowhere I’ll find it unless I go to the old location where there’s a slow supply. The tankers only come during the day,” said Sehaole.

Another resident, Rakhadi Moleleki, 49, insists that water cuts are putting lives in danger and adds that authorities are failing the people. “How do you provide two tankers for the community? Why is the municipality oppressing us in this way? We need water, and we can’t go to work without having to bath,” she fumed.

The JB Marks Municipality has also been lambasted by the opposition parties for what they call the ‘failure of the ANC to govern’, with the DA calling for more tankers.

“The DA believes there should be more the municipality is doing to provide the people of the city with water. We are calling for more tankers instead of the two the municipality has announced,” read the statement.

Meanwhile, the water cuts have affected several clinics in the city itself and surrounding townships. They include the Boikie Tlhapi Clinic, Top City Clinic, Mooimed Clinic, Mogadishu Clinic, Wieland Hospital, Ext 7 Clinic, and the old age home and clinic in Promosa.

Employees are fed up with having to perform their duties without the most basic utility.

Nelly Masemola* from the Promosa old age home explained: “We need water to bath our residents, cook for them and keep the home clean. For us, we have double the trouble here and at home.”

Wilhelmina Matrons, 78, has spent over a decade at the old age home and is calling for a speedy solution.

“I want to call on the Mayor to ensure that they find a solution to this matter as soon as possible. We drink medication daily, and we need drinkable water to do so. And the kitchen staff needs water to be able to make food,” she said.

According to Jeanette Tshite,  Acting Communications Manager at JB Marks, continuous vandalism, ca,ble theft, and load shedding are at the core of the problem. “Because of these interruptions, our reservoir levels are very low, affecting water quality and colour,” she explained.

With no end in sight as load shedding continues, the municipality aims to fill the Eersterantjies Reservoir. Some residents claim that the water was poisoned.

“We’ve added three additional tankers to increase water delivery. We want to reassure the community that the water from the Eersterantjies Reservoir wasn’t poisoned and can be consumed,” said Tshite.

Meanwhile, the entire province is reeling from water cuts. Cities such as Rustenburg, Mafikeng, and Klerksdorp are under close watch as the Intergovernmental Task Team monitors the situation.

Premier Bushy Maape confirmed that his government aims to give all municipalities a stable supply.

He identified long-term sustainability as one of his main priorities.

“We visited the Mmabatho Water Treatmenfirst-hand order to gain first-hand insight into the problems that have been experienced by this facility over the past days. Water has since been restored to Unit 3, Unit 6, and Leopard Park within the Mahikeng area,” he said.

“However, we have also instructed the officials of the province, the national departments, the district, and local municipalities, and the water board to come up with a plan which ensures sustainability and that water outages will be a thing of the past,” Maape added.

These words ring hollow as residents have to deal with no water and load shedding in the middle of winter.

Dora Mafoko, an Extension 7 resident, said the problem started over four weeks ago.

“We didn’t have water from 8 am to 8 pm for two weeks. But on Father’s Day, the taps were completely dry, and we haven’t had a drop of water since. We are unable to bath or clean our houses. It’s a terrible situation, and we don’t know what to do or who to turn to,” said the mom-of-two. – Health-e News