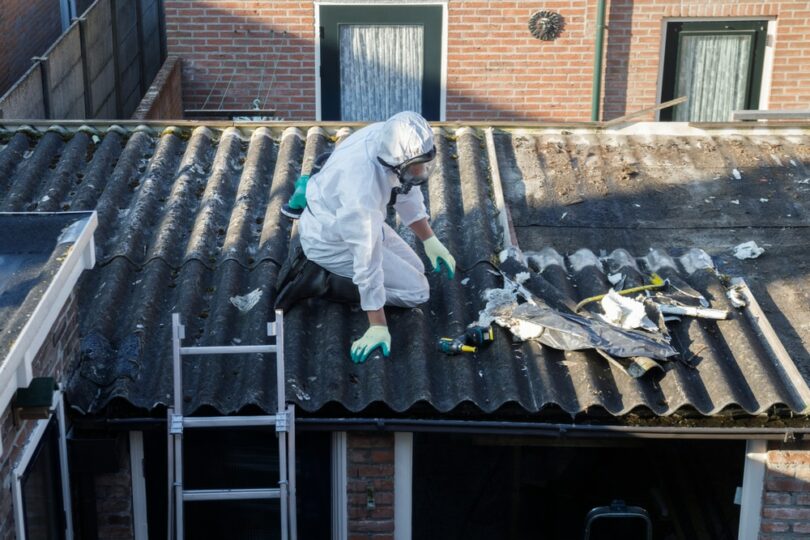 Asbestos is known to cause fatal diseases such as asbestosis, lung cancer and mesothelioma. Free State residents are at risk since most of their roofs contain asbestos. (Photo: Supplied)

Thousands of Free State residents are still having to deal with the harmful effects of asbestos years after the harmful substance was banned.

The ban, which took effect in 2008, prohibited the use, manufacturing, and processing of asbestos in the country. But many of the residents in Botshabelo and Bloemfontein in Manguang still have it on the roofs of their houses built in the apartheid era.

Anicia Mokwena, 61, has been staying in Botshabelo since 1980. Her two-bedroom house has asbestos roofing.

“When we heard that the government will change our roofs, we were very happy because it makes us sick. But due to corruption by our friends and leaders, nothing has changed,” Mokwena said.

The province hit the headlines when suspended ANC secretary-general Ace Magashule and a few others were charged with fraud, corruption, theft, and money laundering related to the R255 million contract for the assessment and removal of asbestos from roofs and/or housing earlier this year.

Mokwena, who suffers from short breath due to asthma, said if she had enough money, she would’ve removed her asbestos roof and replaced it with metal sheets.

“I’m suffering a lot because, in the winter, I’m forced to light wood that causes fibre particles from the asbestos to harm me further. I want to plead with the government to help us get rid of this roof,” she added.

Meanwhile, community leader and activist Potso Motoko has accused the government of following the previous government’s example. He said apartheid authorities were strategic when they built houses with a slow killer like asbestos.

“There is not much difference between the two governments. The apartheid built houses with asbestos to kill our people versus the ANC government, which was supposed to remove the roofs. Instead, they stole the money, and our people continue to bear the consequences. Most people in Mangaung are sick,” he said.

#ACE Suspended ANC secretary-general Ace Magashule claimed in court on Friday that pre-trial proceedings in his R255-million Free State asbestos corruption case were being deliberately delayed to prevent him from participating in the ANC leadership race. pic.twitter.com/Jac6D5OKmO

Asbestos is a group of naturally-occurring silicate minerals made of soft, fibres that take on a fluffy consistency when pulled. Resistant to heat, electricity, and corrosion, asbestos was traditionally used to reinforce and strengthen cement, plastic and roofing materials.

Corrugated asbestos roofs are a familiar sight in southeast Queensland. Due to its superior strength, thermal qualities, and fire retardancy, asbestos was widely used in roofing and insulation for Australian homes until the 1980s.

Asbestos is known to cause fatal diseases such as asbestosis, lung cancer, and mesothelioma. The symptoms of these diseases do not usually appear until about 20 to 30 years after initial exposure. Science is yet to identify a way to reverse the cellular damage caused by asbestos.

It is most dangerous when a person is exposed to a strong concentration or moderate amounts on a regular basis for a long time.

For most people with asbestos roofs, the risk of damage to your health is low. However, you may feel safer if you take a proactive approach to replace your old asbestos roof. This will prevent the fibres from becoming airborne in the future.

While Magashule and his co-accused wait for court proceedings to resume in September, nothing has changed. Free State Premier Sisi Ntombela and Health MEC Montseng Tsiu refuse to comment. Communities have since threatened to shut down their towns on 23 September when the corruption case resumes.

Potso Motorola, from the Mangaung Shutdown movement, told Health-e News that there are conversations going on to halt operations in solidarity with the people.

“Millions of rands were set aside to replace the roofs, yet our people don’t have them yet. We are hoping to shut down operations in those towns where asbestos is killing our people,” he said.

South Africa was the third-largest exporter of asbestos in the world for more than a century. Due to particularly exploitative social conditions, former workers and residents of mining regions suffered. They continue to suffer from a serious yet still largely undocumented burden of asbestos-related disease. This epidemic has been invisible both internationally and inside South Africa.

According to CANSA: “Mesothelioma is a rare type of cancer that occurs in the thin layer of cells lining the body’s internal organs, known as the mesothelium.”

There are three recognised types of mesothelioma. Pleural mesothelioma is the most common form of the disease, accounting for roughly 70% of cases.

The 2017 National Cancer Registry reported that the age group, 70 to 79, accounted for the most deaths, with 74. – Health-e News