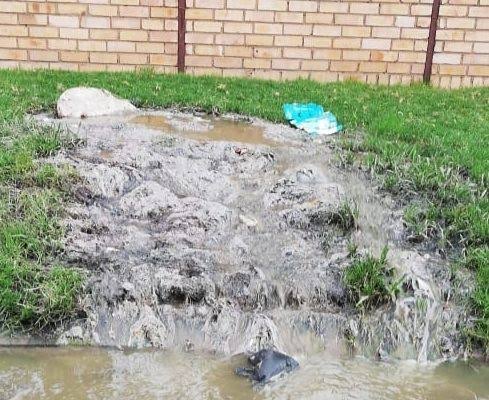 Items such as dirty underwear, sanitary pads and smelly nappies lie scattered next the roads in the streets of Thabong and Phomolong, both within the Matjhabeng Municipality in the Free State. (Photo: Freepik)

Nothing has changed for local communities within the Matjhabeng Municipality in the Free State as sewage in the form of dirty underwear, sanitary pads, and smelly nappies lie scattered next to the roads.

For at least 20 years, Thabong and Phomolong in Welkom have been plagued with sewage spills. They are most noticeable outside the notorious G Hostel, where miners reside just a few meters from the municipality offices.

No place to hide from sewage hell

Themba Coba, a former miner from Welkom, said the sewage has been running down the streets for as long as he can remember.

“The whole township is swimming in &*#@$. There are no plumbers available unless they work in town. We are badly affected by the smell and it makes our lives a living hell,” he said.

Lerato Mallane, 28, runs a fruit and vegetable market said despite the sewage, it’s not easy to move.

“The entire township is flooded by sewer but it can’t stop us from making a living. Although it’s a barrier, we are soldiering on,” he explained.

Meanwhile, an unpleasant smell greets visitors at the entrance to Phomolong, a location in the small town of Henneman. Sewage can be seen everywhere, including the community’s play park, which joins a natural wetland. This remains polluted after two decades.

Phomolong residents constantly complain, but their grievances are ignored. The overflowing sewage has created a stream that forced the Tswelopele Early Childhood Centre to relocate.

What makes this situation even more shocking is that it’s taking place right under the noses of authorities. The local water and sanitation department offices are within proximity.

Phomolong Mayor Thandixolo Khalipa blames everything on “old” infrastructure and said there are limited funds.

“If there was money, we’d improve the infrastructure and bring back the dignity of our people,” he said.

The source of the flooding sewage can be traced to blasted manholes. Due to constant spilling, it has turned streets into stinky pools that pump out waste next to people’s homes.

Henneman locals have lambasted authorities as ignorant amid the ongoing rot.

“This is a complete failure on their behalf. The sewage runs in our yard and over our vegetable garden. Our children’s playground is a rotten mess. The smell is unbearable when the wind blows, and our kids are often sick with running stomachs,” he said.

Morris said the matter had been reported on several occasions but nothing has changed. He added that the stench is worsening by the day.

Opposition parties in the province have added their voice, citing a lack of skills to govern.

“You cannot blame all of this on old infrastructure. What is the plan? The ANC is failing and it’s time for our people to take them out of power. Matjhabeng residents are being diagnosed with TB as the 20-year stink continues,” he added.

Msimang added: “Among the unanswered questions are the legitimacy of the tender bidding, the remuneration fee, and the time frame to solve the crisis. We have been unable to follow up because of all their excuses.”

“The contractor and the municipality should be held accountable for the mismanagement of public services. We seek to see documented records of that tender so it can be inspected. Moreover, we fail to understand why the municipality fails to take responsibility.”

Msimang pinpointed corruption for which the municipality must account.

“Our activism will continue on the problem of leaking meters and running sewage in our streets that are not attended to,” he concluded. – Health-e News