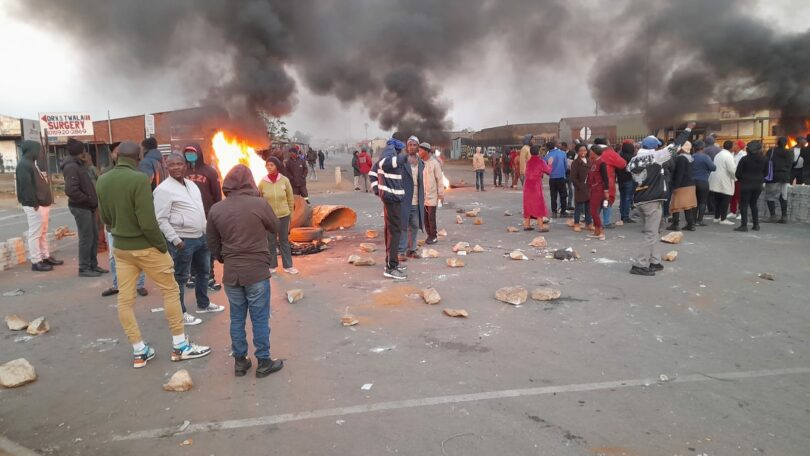 Patients were forced to jump through hoops to access healthcare services at the Thembisa Provincial Tertiary  Hospital (TPTH) as violent service delivery protests erupted across the Ekurhuleni township yesterday.

Residents blockaded all major roads with burning tyres and rocks, demanding that Ekurhuleni Mayor, Tania Campbell, come and address them over high municipal rates as well as electricity disruptions.

While some chose to stay away and miss their appointments at the hospital, others decided to take a chance.

Diepsloot resident William Motaung (50) arrived at the hospital around 6.30 am. This alone was a struggle because similar protests were taking place in his area.

“It was not full inside, and I could see the doctor and collect my medicine at the pharmacy sooner than expected. I am happy with the service I received, but I do not know how I will get home because there are no taxis. This is very stressful for me,” said Motaung.

He told Health-e-News that he would walk until he could find a taxi to take him to Ivory Park. From here, he’d catch another one to Diepsloot.

Another stranded patient, Florence Mpande from Kempton Park, brought her sick child to the hospital’s paediatric clinic for a check-up. They took a taxi from the Kempton Park rank, their journey was cut short when they encountered protesters on the R25 about 38 kilometres from the hospital.

“They told the driver to drop us off at Oakmoor, and we walked for some distance. I spotted a police car and asked to accompany me to the hospital. When we got close to the Engen garage, they told me the roads were blocked with tyres. I had to walk the rest of the way,” said Mpande.

Fortunately, protesters allowed patients making their way to the hospital to pass through.

Mpande explained: “They asked another lady and me who also had a child where we were going. When we told them, they let us pass. I was scared but needed my child’s test results. I am happy that we were not harmed.”

Like Motaung, the 37-year-old also had to catch a taxi to Ivory Park before catching another to Kempton Park. 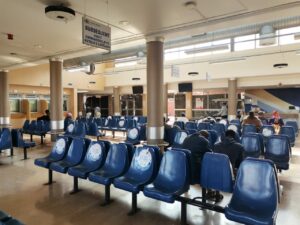 The deserted chairs say it all. As violence broke out in Thembisa, patients had no choice but to avoid making the trip to Thembisa Provincial Tertiary Hospital. (Photo: Supplied)

Lorraine Mongalo, 36, from Phomolong in Thembisa, missed her appointment because no local taxis were available.

“I was scheduled to go for a scan and get blood test results at oncology, but I missed it because there was no transport, nor was it safe. I am worried because the scan was going to show whether the lump on my throat is cancerous or not, so I will have to book another appointment,” she said.

Although some staff were not able to make it to work, it was business as usual with only two elective procedures cancelled for the day.

TPTH CEO, Dr Ashley Mthunzi, said 10 percent of staff could not come to work. Seven percent took emergency leave. They could not locate the other three percent. Staff members’ inability to come to work only worsened the hospital’s staff shortage challenges.

Mthunzi said on a normal day, they attended to at least 100 patients compared to 20 yesterday. Pregnant women were also unable to come for antenatal checkups.

“The uptake is poor because ambulances cannot access the areas where they need to collect patients. We have come up with a contingency plan. We have opened Gate 5 up for emergencies and general access,” said Mthunzi.

Backup measures included rotating staff from departments that weren’t as busy to help out where needed. And arranging transport to pick up staff from an undisclosed location.

Mthunzi encouraged patients and staff to keep safe and measure the risk before making the trip to the facility.

#Tembisa Customer Care Center is On Fire
Vehicles are burning inside the Thembisa Civic center and some vehicle burning outside on the street.#saps trying to contain the situation…#Tembisashutdown pic.twitter.com/V83EuQ7Ktr

City of Ekurhuleni Mayor spokesperson Phakamile Mbengashe, said they were determining how many clinics the protests affected.

At the time of publishing, at least four protesters had lost their lives in clashes with police. – Health-e News