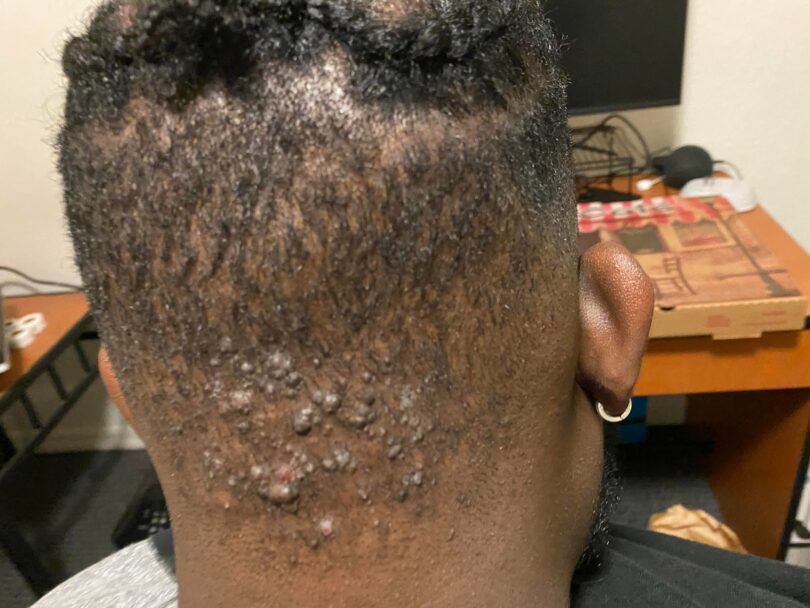 Acne Keloidalis Nuchae is often mistaken for razor bumps found on the neck and scalp. But it's an inflammatory skin condition that worsens if not treated early. (Photo: Skin Clinique - Twitter)

African men around the world are prone to a skin disorder called Acne Keloidalis Nuchae (AKN) which if left untreated, worsens causing scars and hair loss.

According to the American Academy of Dermatology Association (AADA), AKN is a common skin condition, which is often mistaken for acne or razor bumps on the back of the neck and scalp. Without proper treatment, AKN tends to worsen which makes it imperative to see a board-certified dermatologist as soon as bumps appear. If not treated immediately, raised scars and hair loss can occur.

Health-e News spoke to Mluleki Sibiya, who has been suffering from AKN since he was 18. He believes he developed AKN after gaining weight and shaving with a razor blade almost every week.

“I first noticed it when I gained weight due to a bad diet, eating oily and fast food,” said Sibiya.  “My grandmother would tease me and say ‘look at you, you are developing ‘ilundaa’, which is a hump that usually develops in wealthy men, according to belief.”

A concerned Sibiya said he tried to cure it by doing research. He discovered that it wasn’t contagious and can run through his family since it is genetic. His uncle also had AKN, only much worse.

“It is genetically based, as it affects patients with specific curly hair,” said Parker.

He further explained: “On the microscope, you can see that the follicle opening gets blocked and that then courses inflammation of the entire follicle.”

Parker added that from years of research, certain hair-cutting techniques could aggravate the condition. For example, cutting the hair too short with a razor blade only worsens it.

He advised that AKN patients avoid cutting their hair 5mm and shorter.

Mthokozisi Mathenjwa said he noticed strange bumps on his scalp after shaving with a razor blade. To try and fix the bumps, he bought a hair clipper but since the AKN had already developed, it didn’t help.

“I tried many things, most of them recommended by people in the streets and on social media. Some suggested I rub petrol on my head after shaving. Engine oil was also mentioned while others said I should try methylated spirits. I even tried expensive after-shave cream but nothing worked,” said Mathenjwa.

He continued: “I then went to a pharmacy to explain my situation. The pharmacist looked at my scalp and suggested I use Epiderm cream every evening. I did this for two months but it didn’t work.”

Mathenjwa returned and the pharmacist advised him to go and see a dermatologist. But he still hasn’t gone.

Let's have light on these conditions we get out of shaving hair in different body parts.
Flames 1&2 is called Acne Keloidalis Nuchae and Flames 3&4 is Pseudofolliculitis barbae/Razor bumps (Pseudofolliculitis pubis for pubic area). pic.twitter.com/eddtpg4pWH

Dr Parker said there is no cure for AKN. “However, patients must see a dermatologist try and keep the disease under control. Good management is needed as soon as possible to avoid the condition from spreading,” he explained.

He added that people must avoid self-treatments which only damage the skin further and could develop into skin cancer.

“There is no real truth about all the myths which are spread by people on social media, so the best advice is to see your dermatologist,” advised Parker.