Home » News Articles » Ramaphosa: SA is at war with its women and kids 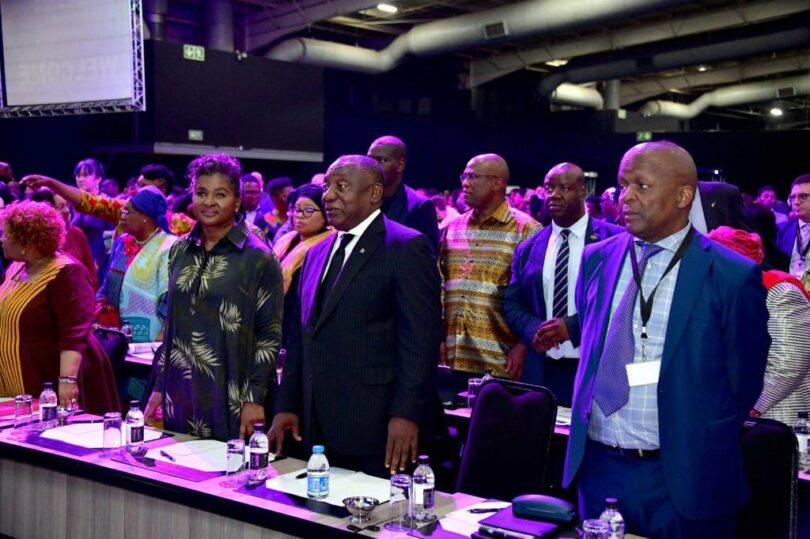 President Cyril Ramaphosa declared gender-based violence as South Africa's first pandemic and said there are no words to describe the atrocities committed against the country's women and children. (Photo: GBVSummit2022 - Twitter)

Ramaphosa: SA is at war with its women and kids

President Cyril Ramaphosa declared gender-based violence and femicide as South Africa’s first pandemic and said society was at war with women and children.

The President spoke during the second day of the 2nd Presidential Summit on GBVF at Gallagher Estate Tuesday.

“Despite our efforts, violence against women and children continues. There are no words we can use to describe the horrors and horrific manner in which all these murders and rapes have happened. They tell a story about a society that is deeply disturbed and seemingly at war with the women and children,” said Ramaphosa.

Data from the South African Police Service (SAPS) shows that sexual offences and rape increased by 13% in the first quarter of  2021/2022. There was also an increase of 52% in the murder of women and 46% in children.

“The barbaric acts are a shameful reflection on the men of SA. It is men who are responsible and who must take responsibility. As a society, ending violence against women and children has to be our foremost priority,” he said.

Ramaphosa admitted that the government had not prioritised GBVF as it should’ve.

“Some progress has been made, but much more needs to be done. We have not demonstrated great urgency, and we could have and should be doing much better,” said the president.

He emphasised that the summit’s purpose was to be focused on action and results. This includes encouraging civil society to hold the department accountable and call out failures.

“Let us use this summit as a forum, platform and opportunity where we can come up with solutions,” said Ramaphosa.

The road ahead will be long and challenging, but it is a road that we must walk together.

It is a road that we must walk – together and with determination – so that the women and children of this country may live in safety, in peace and in happiness.https://t.co/Jphqmr7gOL

The Bill that will pave the way for establishing the GBVF Council is currently before Parliament.

Ramaphosa acknowledged it had taken too long to be enforced since the last summit due to long consultation periods. He said that he is hopeful that the process will speed up.

He noted the first achievement was signing the following key pieces of legislation in January:

“This affords greater protection to survivors of GBVF and perpetrators are no longer able to use legislative loopholes to evade prosecution. Through these laws, we will be able to catch them,” said Ramaphosa.

Other reforms that will strengthen the fight against GBVF is the inclusion of the hate crimes and hate speech bill, which works for the prevention and combating of incidents of hate crimes. This is currently before parliament.

The victim support services bill has been approved by the cabinet and published for public comment.

“Since the last summit, 83 courts have been upgraded into Sexual Offences courts. We have since prioritised support for survivors by opening more one-stop services for survivors like Thuthuzela Centres (TTC) and shelters around the country.

Ramaphosa said that the centres are proving to be very effective in improving conviction rates. More centres will be opened in the country to add to the increase of TTCs, including Limpopo and the North West.

He added: “Out of 52 districts, 45 have at least one GBV shelter, and 85% of these are funded by the government. The Department of Social Development has also been working on a National Response Team.”

The President acknowledged the vulnerable position that women who have albinism are in. They are often forced to stay in toxic relationships with abusive men because they can’t find employment. He noted with concern the need to declare albinism as a disability to allow them to access the disability grant.

“We are not where we want to be. The departments are confronted with an immensely difficult task,” said Ramaphosa.

“Two limitations for the SAPS is that the disintegrated data regarding gender identity and sexual orientation is unavailable, which raises concern regarding adherence to human rights principles. Secondly, not all domestic violence occurs due to unequal gender relations, such as same-gender incidents or greed-motivated domestic violence,” said Mosikili.

Police statistics for the period between April and June revealed that the most common place where rapes occur is at the perpetrator’s residence. Over 3 000 incidents have occurred at residences familiar to the victim.

This is followed by public places and park areas with 1 500 incidents of rape. Modes of transport like taxis and trains came up third with 156. Other places include dumping sites, farms, and railway stations

During the same period, a total number of 54 life sentences were handed down. And out of 49 cases, 46 people are currently serving their sentences.

The formation of GBV desks is a major milestone, according to Mosikili.

“We continue implementing the Departmental GBV and Sexual Offences (GBVSO) Action Plan. One of the key deliverables is to enhance accountability and organisational performance at police stations,” she said.

The GBV desk guidelines were approved on 17 June 2022, and the implementation plan for GBV desks was approved a few weeks later.

“An audit is underway to assess the functionality of GBV Desks with the view of identifying challenges and enhancing the performance. Designated victim-friendly rooms are available at 1017 police stations to ensure statements are taken in private to protect the dignity of the victim,” said Mosikili.

She said that alternative arrangements are made for victims in the absence of these rooms.

Status of femicide in SA

In South Africa, three women are killed per day by an intimate partner. Intimate partner violence (IPV) is the leading cause of women being killed at 52%.

Director of the Gender and Health Research Unit at the South African Medical Research Council (SAMRC), Professor Naeemah Abrahams, presented the state of femicide in SA. The information is based on three dedicated studies that describe femicide. Although conducted almost four years ago, to date, this is the only GBV data that is available nationally.

The studies started in 1999 and were repeated ten years later and again in 2017. The focus was only on two main types of femicide – IPV and non-intimate partner violence.

The studies took place in two phases, starting by visiting mortuaries to collect information about women from their deceased bodies. Phase two looked at cases where they spoke to the police or investigating officers who investigated the crime.

It showed that firearm-related femicide in the period between 1999 and 2017 decreased.

“This can be attributed to legislation. The Gun Control Act had a substantial impact in decreasing all forms of femicide. We are finding that the efforts of women’s movements in SA and dedicated government policies and programming to combat GBV are reaping the rewards in a reduction in intimate femicide over the period in the studies,” said Abrahams.

“The R1.6 billion which made up the funds to implement the National Strategic Plan (NSP) was extracted from the various departments at the top of their budgets to fund this whole effort. They were all required to set aside money for funding the NSP. Now that we will have a council in terms of the law, the treasury will be able to set money aside separately to fund this fight,” said Ramaphosa.

Ramaphosa said he has been following up on the formation of the National GBVF Council. He said that it is currently underway in parliament.

“One of the great successes of our efforts to fight GBVF is the extent to which social partners have rallied behind the NSP. We are grateful to all those people across society who have been involved through all stages of the formation of the strategic plan,” he said.

Ramaphosa explained that provincial departments must submit monthly reports about what they’re each doing to combat GBVF. He admitted that this is happening sporadically.

He concluded by committing to strengthening the fight against GBV.