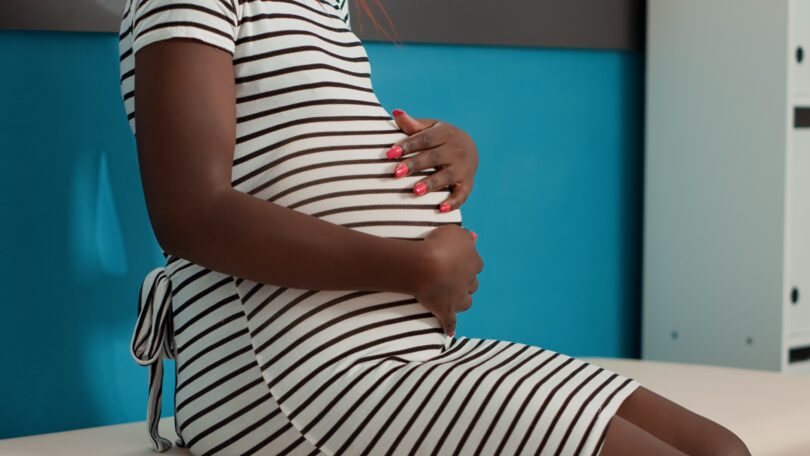 Being a teenager is hard enough these days, nevermind being pregnant. Teen moms share their journeys, often difficult and lacking in support. (Photo: Freepik)

The number of teenage pregnancies is rising rapidly in South Africa and the mental burden is taking its toll as children as young as 10 are falling pregnant.

According to the South African Medical Journal (SAMJ), the number of births among children aged 10 – 14 years increased by 48.7% and the birth rate per 1 000 girls in this age category increased from 1.1 to 1.5.

Up to half of the adolescent mothers experience postpartum depression in Africa and if left untreated, they are far more likely to fall pregnant again within two years.

According to a research article published in 2022, although research on maternal mental health in Africa is sparse, some studies estimate the prevalence of postpartum depression in Africa to range between 15 to 25%.30,31.

The prevalence of postpartum depression among adolescent mothers ranges from 14% to 53%. This is more than double than observed in older mothers (7–17%).

SAMJ analysed the data available in the public sector database, the District Health Information System, from 2017 to 2021.

These increases also occurred year-on-year in a continuous upward trend in all provinces but at different rates. A screenshot from a Department of Basic Education presentation shows that almost one in three teenage girls will fall pregnant in South Africa.

Given these frightening numbers, teen moms share their experiences and the effect pregnancy had on their young lives.

Londeka and Patience are both mothers who fell pregnant as teenagers. They shared their mental health struggles and what it was like to be expecting a baby.

Londeka Ngcongo, 17, is mother to a baby girl just over a year old. She fell pregnant in August 2020 and gave birth in May last year.

“I was nervous and thought that I will be kicked out at home. But I never thought of having an abortion,” said Ngcongo.

The teen mum who is from Inanda, Durban, lives with her mother’s family.

“At home everything is bad. I’m being insulted and they are talking behind my back, gossiping. I feel like a prisoner, said the teen.

“They don’t appreciate anything I do at home. I feel like I am useless and I am not a member of the family. Life is difficult as an outcast,” said Ngcongo.

She said that her father’s side of the family is a bit more supportive.

“My father’s family is okay. They are supportive and understand that just like any other teenager, I made a mistake. I wish I could live with them but I can’t because they live in a rural area in northern KZN. I am studying so I can’t live in a rural area,” she explained.

Challenges as a young mother

Ngcongo had to skip school last year because her baby was very sick.

“We stayed at the hospital for two months. Even this year, my baby is still in and out of hospital which is difficult for me as a young mother,” said Ngcongo.

She said she is grateful for the support from her boyfriend’s family since her own doesn’t care about her well-being or the baby’s.

Ngcongo said that being at school is tough, not because she has a child but because of depression and trauma.

“My high school life has been difficult since Grade 9 because I had no support from home. Even the school uniform that I had was not in a good condition,” she explained. “It became worse when they found out that I was pregnant. My mother didn’t even support me not to mention my friends who all turned their backs on me. But I told myself that life goes on and that I have to be strong for myself and my child.”

During the week, Ngcongo’s child stays with her boyfriend’s mother. But during weekends and holidays, she fetches her child.

Though Ngcongo does receive a social grant, it’s not nearly enough to cover medical expenses.

“My dream one day is to have my salon in town. I see myself as being a businesswoman one day,” Ngcongo said.

Mentor, who lives in Delft, Cape Town fell pregnant in Grade 11 and felt like her life was over.

“The first thing that crossed my mind was my parents. I knew that they were going to be disappointed. I gave birth in June during my Grade 12 year and dropped out of school, so I don’t even have matric, ”she said.

Mentor said that the pregnancy was not easy and she was depressed throughout.

“Getting through the day was hard. Both of our parents agreed that I should stay at home until the babies were born but the environment at home wasn’t nice, especially with my father. There was also a time when suicide crossed my mind because I felt like a burden and unworthy,” she said.

“I was lucky that I fell pregnant towards the end of Grade 11 so I didn’t have to face people’s comments and stares at school. But I knew that I’d have to face it eventually in matric because my bump was growing.”

Mentor said that a social worker in the community encouraged her to join a support group for teen mothers because she could see how it was affecting her mental health.

“Aunty Lydia was more supportive than my family so that did help in a way. She guided me and told me that I need to speak about how I am feeling and not keep it inside. I am grateful to her because it really helped with the mental health struggles I was having and still have sometimes,” Mentor said.

She started doing people’s nails as a way to make income.

“My boyfriend and his family do help financially but I just wanted to make sure that I am making money of my own, so I started with something simple. It’s not a lot but it’s a start. I hope to study someday. I didn’t finish matric but I still hope that I can do something to secure my future.”

A 2020 study explored the intersection between mental health and sexual and reproductive health among adolescent girls and young women (AGYW) in SA.

They are at risk of poor mental health, HIV infection and early pregnancy. Poor mental health in AGYW is associated with increased sexual risk behaviours and impeded HIV testing and care.

Respondents suggested that due to the social stigma attached to teenage pregnancy, pregnant AGYW fear being judged and gossiped about.

“Pregnant girls feel sad and some even contemplate suicide (azive efuna ukuzibulala) because of gossip. They are teased and then drop out of school,” read the study.

The emotional ‘burden’ of teenage pregnancy was described as a key contributing factor to poor mental health.

“They say having a child is a good thing, but as a teenager, it is a burden, it’s difficult to cope,” said some of the respondents.

The study also revealed that a lack of emotional support from partners or the fathers of children also contributed to stress and depression among young mothers. Lacking a supportive social environment negatively impacted mental health and self-esteem.

Suggestions from this study include addressing the burden of unplanned teenage pregnancies.

Sex education needs to be incorporated into discussions at school, home, and health facilities. Safe and stigma-free access to contraceptives also needs to be provided for adolescents.

Authors from the study also suggest that the sociocultural stigma and taboo associated with discussions about sex at school and within the community need to be mitigated to provide a safe environment for teens to engage.

Community health workers can be trained to provide sex education to community members (including teenagers and their families).

“Teens are more comfortable learning from teens. Trained peer counsellors and support groups have been used to provide a safe environment for adolescents to have healthy conversations on sexual and reproductive health,” it further read.

There are several organisations throughout South Africa that provide support for teenage mothers and their families. A few include: