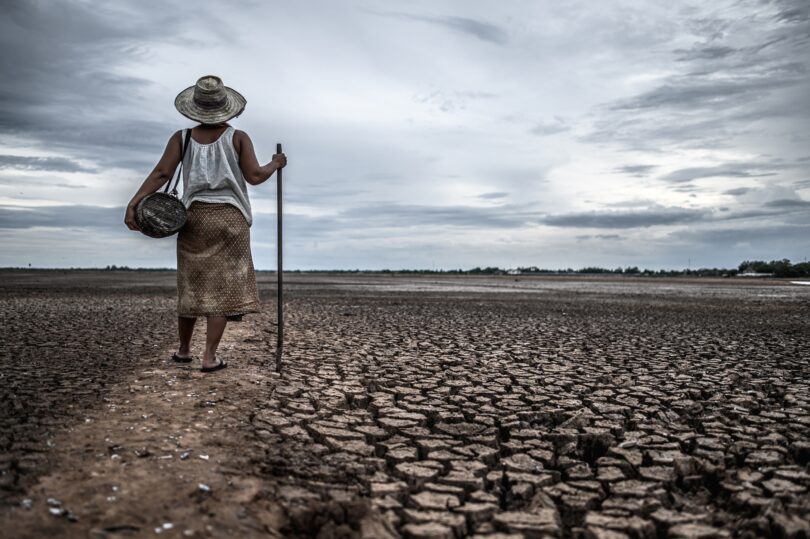 The United Nations estimates that 80% of people displaced by climate change are women. In South Africa, experts believe that the challenges women face, including gender-based violence, only heightens during extreme weather conditions caused by climate change. (Photo: Freepik)

South Africa is feeling the impact of climate change. The recent floods in KwaZulu-Natal, consistent droughts in the Western Cape, water scarcity, and heat waves all over the country are examples of some of the consequences. And as a result, it has left thousands displaced.

The United Nations estimates that 80% of people displaced by climate change are women. When women and children are displaced, they are at greater risk of facing physical, sexual, and psychological harm and violence, as well as the denial of resources or necessary services.

In a country like South Africa, the already high gender inequalities and gender-based violence (GBV) only heighten in the aftermath of disasters and pandemics.

Thobeka Gumede, an attorney and community activist from the Centre for Environmental Rights, said that women and children, especially those living in rural areas and poorer communities, bear the biggest burden of climate change.

She explained that traditionally, it’s the woman’s responsibility to ensure that everyone’s basic needs are taken care of. This includes making sure that there’s enough food, water and shelter for her family members. When one of the basic needs is insufficient or unavailable, it’s often the woman’s fault.

“Women must travel long distances in the early morning to find water. This alone exposes them to sexual harassment. We live in a society where it’s unsafe for women to walk alone,” said Gumede.

“Farming communities we have worked with have told us how unpredictable weather patterns have affected their harvesting. Long periods of rain cause floods over gardens and vegetable farms,” she said.

Climate change risks the accessibility or the availability of the natural resources that people rely on. With the lack of resources to adapt, they become vulnerable to violence.

Research Professor Mathew Chersich, from the University of Witwatersrand, said it is increasingly important to understand that there is a connection between heat and violence. The earth’s climate is becoming warmer, and more intense, longer-lasting heat waves are anticipated.

Exposure to extreme heat is already common in many parts of the country, such as the Northern Cape. Parts of Johannesburg have also reached unbearable heat levels.

“Temperature can profoundly influence a person’s physiology and behaviour. Heat exposure has a range of physiological sequelae, affecting comfort levels, emotional stability and sense of well-being. Being in an uncomfortably hot environment provokes irritability and aggressive thoughts and reduces positive emotions such as joy and happiness,” said Chersich.

Hot under the collar

Chersich noted that men appear to be particularly sensitive to the effects of heat on aggression.

Through research conducted by Chersich and other experts, they refer to data collected from all 1 158 police wards in South Africa, which documented higher levels of violence, including homicides, during periods of high temperature.

In Tshwane, Gauteng Province, the study assessed five years of temperature and crime data and found that the mean number of violent crime incidents was about 50% higher on high-temperature days compared with low-temperature days and random days selected from the dataset after the warmest and coldest days had been extracted.

Another study in the same area noted that violence was more frequent in the summer months, leading to a seasonal pattern in crime. Factors such as elevated alcohol consumption and behavioural changes around Christmas also influenced the findings.

“People tend to congregate outdoors due to hot weather, increasing opportunities for contact crimes and violence.  Additionally, alcohol use, a potent trigger for violence, can increase during hot weather. Dehydration, more common on hot days, is associated with mood disturbance, confusion and anger.”

He said physiological and behavioural pathways combined might increase the likelihood of violence. He pointed out that violence committed to harm others physically compared to gain assets, like robberies primarily, is more likely.

Based on the findings and using a conservative estimate of a 4-5% increase in homicides per degree rise in temperature, the study estimates that the current number of homicides per year in South Africa, which is 20 336, will increase by between 800 and 1 000 should the temperature in the country rise by 1°C.

“Evidence increasingly indicates that the propensity for interpersonal violence may increase in uncomfortably hot temperatures. Countries like South Africa, which already have high levels of violence and a rapidly warming climate, may be particularly vulnerable to this under-appreciated consequence of climate change,” he said.

Chersich added that extreme weather events and conflict over food and water could also raise levels of collective violence and transnational conflict.

“Physical environmental triggers of violence, such as heat, are set against the backdrop of complex social processes, poor governance and historical circumstances that influence violence. I would say that more detailed assessments are required of the linkages between heat and violence,” said Chersich.

I highly welcome the @UNFCCC Parties acknowledgement of the impacts of climate change on human mobility, including displacement, in the #COP27 Implementation Plan as well as a Loss and Damage Fund.

Looking forward to continuing to strengthen solutions for #climatemigration. pic.twitter.com/0Hg7TKodzM

Legislation is the first step

Gumede emphasised that women carry multiple additional burdens due to the impact of climate change. She said that making changes to the legislation and policies is the first step to responding to this issue.

“The consideration of the close link between climate change and the increase of GBV, as well as other gender considerations, have not always been there. I think it is slowly starting to emerge. Once we acknowledge the need to consider this, it can be incorporated into policy,” she said.

The Climate Change Bill is in place to represent the country’s national response to climate change. The Bill is currently in the commenting stage, where public members can make oral comments and suggestions.

“Even this Bill does not incorporate the consideration of the country’s inequality and gender. It is really up to civil society and South Africans to voice how climate change contributes to GBV and the burden on women, so this is clear to the government, and they can act on it,” she said.  – Health-e News

Have your say on the climate change bill: